Stuck in the Middle Cast Interviews

I recently had the chance to hang out in the middle (literally!) of Disney Channel’s STUCK IN THE MIDDLE cast while on a video to Los Angeles and let me tell you – this Diaz family cast is a pretty fun crew to hang out with! I think you’ll really enjoy learning more about the Stuck in the Middle characters!

Don’t you think that I fit right in? That’s me right there in the middle of the Stuck in the Middle cast! 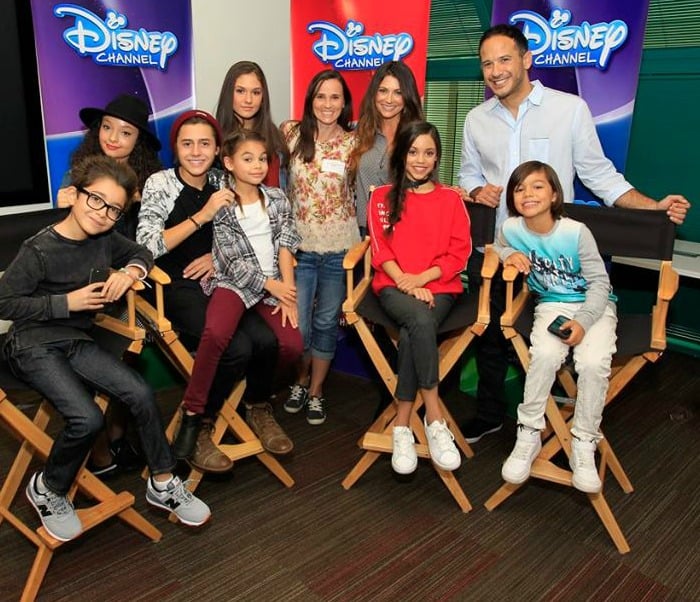 I think I could blend right into this large family! How much fun that would be? I’d gladly take them on as a second family because let me tell you, this tv series family is loads of fun! If you aren’t yet watching the Disney Channel’s original series, you need to be – this tv show is one that real life, real family members can relate to!

If you haven’t seen this short-form series, it’s a fun show about the large Diaz family. It features Rachel Diaz as the oldest of seven kids in the Diaz family. You probably also know that this series stars Jenna Ortega – she plays Diaz daughter Harley who is the middle of the seven children as the middle child. Thus, the name of the show as she is the main character and most story lines tend to revolve around her being …. you guessed it. Stuck in the middle. The episodes focus on her creative way of dealing with growing up in a large family. It all takes place in the fictional town of Marshport, Massachusetts.

Of course, this brings all kinds of different personalities and a lot of comedic stories of a big family and if you watch it, I’m sure you’ll walk away with a few favorite characters just like I did!

Wouldn’t you like to be part of the Diaz family?

Who is the Cast of Stuck in the Middle

The show is written and produced by Linda Videtti Figueiredo. Disney Channel first previewed their new family comedy, “Stuck in the Middle” on Sunday, February 14, 2016.

I didn’t from a large family but if you grew up part of a big family, you might really relate.

The Diaz parents are one of a kind and this family dynamic is so entertaining. A busy suburban Massachusetts household that is filled with chaos, laughter, lots of crazy and even more love. Portrayed by Joe Nieves, Tom Diaz is the father of the Diaz children. He and wife Suzy Diaz, played by Cerina Vincent, are the fearless parents in Stuck in the Middle.

About the Stuck in the Middle Cast

On screen, this cast has a very fun and loving chemistry. I had a chance to meet them behind the scenes and get a peek at how things look without the cameras rolling.

One thing that really stood out to me was the off camera chemistry. These people really love each other!

Love is Love … on and off the set!

In fact, Cerina Vincent who pays mother Suzy Diaz in the series actually got teary eyed a few times talking about “her kids”. And in her words “love is love.” LOVE!!

Here’s a fun clip from our interview in which she shares her love for her on screen children:

Seeing the entire cast together, they really do come across as a very believable family. The bigger kids seem to look after the littles and the parents were just beaming watching their “t.v. kids” talk about their family.

I also loved how playful they were with each other, you could really tell that they enjoy their time together.

Jenna Ortega on Being a Prankster

My daughter had recently shared with me an article in Discovery Girls. It shared that Jenna Ortega is a big prankster, so it was fun to ask her if there were any pranks happening on set.

She quickly took full pride and responsibility and I got it all on film!

Here’s a fun clip featuring the cast members sharing an April Fools’ Day prank that they played on brother Ethan Diaz ( played by Isaak Presley) who is apparently the biggest Oreo fan. Watch this clip to find out how they got him with biggest prank using only a packet of Oreos and a little toothpaste:

That April Fool’s Day prank with the Oreo cookies really cracked me up and shows you just how much fun these tv show children have with each other. I was thrilled to have this exclusive interview with them.

My daughter adores this show, and I enjoy the fact that main character Harley (and all the kids for that matter) is very motivated and hard working.

Harley is actually very smart and is a bit of an engineering prodigy. Always inventing and creating and I think that sends such a wonderful message to young boys and girls.

Who is that girl from Stuck in the Middle?

I hear this a lot! Because so many kids get their acting start with Disney, little by little their careers really start to take off!

There is so much young talent in this show, and you can bet you’ll see these young girls in more projects in the next few years!

Here in this clip, Harley Diaz (Jenna Ortega) and Georgie Diaz (Kayla Maisonet) sent my daughter Lauren a sweet message that absolutely made her day:

Joshua Bassett appearances on Stuck in the Middle

If you watch the show, you’ll also know that there are a few recurring roles. Not present, but a fan favorite is Joshua Bassett who plays Aidan Peters, as a recurring character on Stuck in the Middle.

He is Ellie Peters’ cousin, who moves into the Peters’ house. He is Harley’s boyfriend. If you are looking for episodes in which you can see him, you’ll find him in the 2018 episode “Stuck in the Middle” Stuck Wrestling Feelings.

Ariana Greenblatt in Stuck in the Middle

Another favorite from this new series is Lulu Lambros in her recurring role of Ellie Peters on Disney Channel’s Stuck in the Middle. Not only was she best friends with and a big part of life in the Diaz home, she’s quite popular outside of the show. She stars on AwesomenessTV and has over 38 million likes on TikTok.

Nicolas Bechtel as Lewie Diaz – Where is he now?

One thing that might shock fans is that Nicolas Bechtel who played Lewie Diaz on the show, is now 16 years old in real life! This short series brought us so much talent and it has been fun to watch these characters go on to new roles and adventures.

More about the Stuck in the Middle Characters

No matter what the episode is about, there is a strong theme of family (obviously) but kind of an all for one and one for all mentality. A great show for the entire family! 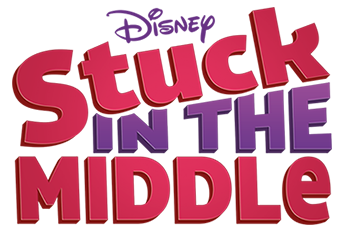 Catch Stuck in the Middle on The Disney Channel!

Update: What Happened to Stuck in the Middle?

I’ll try to update this post as often as I can. Middle children everywhere fell in love with this show and the light that it shed on Harley’s storyline and her important role as not only the little girl at the center of this family – but also as the character that tied most episodes together. Created by Alison Brown and executive producer Linda Videtti Figueiredo, this single-camera comedy series gave us a peek into this crazy and chaotic life.

This Disney Channel original series didn’t last quite as long as we would have liked. It’s final season was season three, and while we would have loved a fourth season – we are still thrilled that there are 59 episodes for fans to enjoy. The show came to a bittersweet end in 2018 but I know that fans are grateful for Disney Plus streaming of this very loved show! If you haven’t yet seen the Stuck in the Middle series finale, make sure you make time to catch it – it’s probably one of my favorite episodes of the entire show! And that also tells you, that this isn’t just a kids’ show – Stuck in the Middle is a Disney Channel series for all ages to enjoy!

Again, this fantastic sitcom is one of Disney Channel’s original series and if you aren’t watching yet, then the story of the Diaz family is one that you need to dive into! The cast of Disney channel members in this story of Harley and the way the show explores a look at large families and they dynamic of what goes on in this family’s busy suburban Massachusetts household is one for all ages to enjoy! Truly a favorite Disney channel tv show, I hope that your family watches Stuck in the Middle and enjoys Harely’s storyline as much as we have!