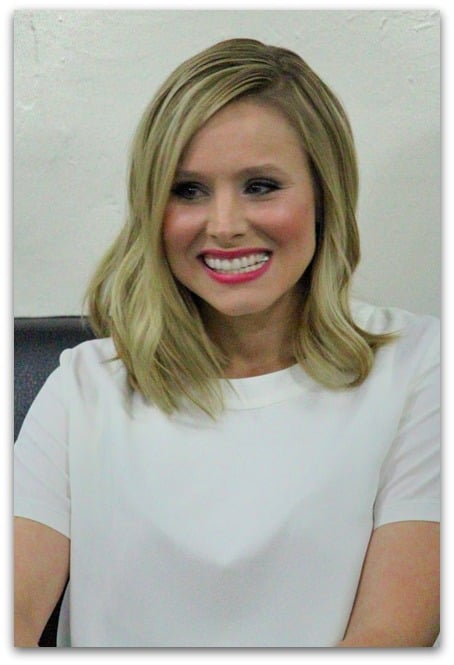 Frozen hits theaters on November 27th, and Kristen Bell voices Anna… the character who will steal your heart!

Prior to attending the world premiere of Disney’s Frozen in LA last week, I had the opportunity to sit down with Kristen Bell, the actress that voices the character of Anna in the movie. Actually, she does more than give Anna a voice, she brings her to life, and after meeting Kristen in person, I feel pretty confident in telling you that Anna owes her adorable and charming little persona to Kristen. Anna is sweet, charming, full of life and love  … she talks fast and excited and happy and you just really find yourself liking her. Yes. She and Anna are are a LOT a like. I think this probably happens organically as the character unfolds in the development stages, but what a brilliant choice on Disney’s part as I do have to say, Anna is now one of my favorite Disney characters of all time. 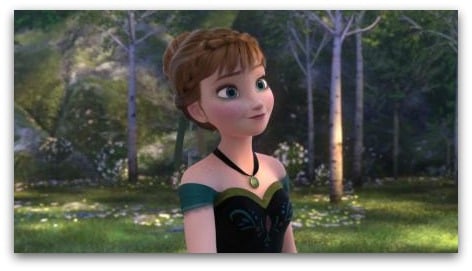 Here are a few of the questions that we asked Kristen and the answers that she gave. I think that you will be able to see her personality coming through in her answers:

Q. How did you get involved in the project?

KB : I well I’ve always wanted to be in a Disney animated feature like since I was four years old or five years old. It was the first goal I had ever set for myself. But I- the reality is I, um, auditioned for Tangled and after my audition the casting director pulled me aside and she said, oh that was great and if we go another way, which I think she knew they were, um, but I want you to meet Chris Buck because he’s directing a project that’s a few years down the line called The Snow Queen, and I think you’d be right for it.

Q. Did the musical aspect of it, singing scare you

KB : No, that was what incited me to want to do it, because I studied music in college and I, I trained operatically when I was a little girl, um, and I love musical theater so, so, so much. So, um, I’d done a couple Broadway musicals and I try to keep music as relevant as possible and I, and it really just makes- it puts me in a mental state of happiness like nothing else, I think. Really like nothing else. Um, maybe now other than the kid.

But, um, so I was so eager to get my hands on being a part of, of a musical again. And especially for the two people who I think have modernized musical theater, uh, these days Bobby and Kristen Lopez, because I think as, even as like much of a musical theater freak as I am, it did hit a plateau of becoming a little oh, I’ve seen that kind of musical. Just flat- hadn’t seen a musical I had liked in a really long time, and then I saw Book of Mormon and my head exploded, you know, it’s the funniest thing I’ve ever seen, you know.

Q : What did you do to prepare?

KB : I didn’t at all. I came in with so many ideas, because this was not how the movie was written at all. The, um, the inception of the script was much different than this script we have now. And it went through quite a few rewrites and finding everything, ’cause originally they were mother and daughter. And then they were sisters. And then they weren’t. And then they had Elsa and Anna. And then I think they just tried to figure out what worked the best for telling the themes of the story while using the Christian Andersen, um, fairy tale as an outline. And I, I knew exactly what I wanted to do going in, I was like, I don’t want her to have good posture, I don’t want her to like have dreamed of holding a sword her whole life. I didn’t want her to be one or the other of the archetypes that I was used to seeing. Um, and I, I just wanted her to be who I wanted to see on screen when I was little, which is someone who talks too much and too fast. And puts her foot in her mouth and is goofy, but really kind of likes people and being social and, um, being positive.

And I really wanted her to also be, um, proactive, I wanted her to be the, the, the driving force of the movie. And not just be the damsel that needs someone else, you know. Like that she wants to- oh, you guys haven’t seen it, spoiler alert.

Q : Do you have a scene in the movie that’s your favorite?

KB : The thing, the scene that I connect to the most and maybe it’s not- it’s not necessarily because of a personal experience, um, but it’s because I appreciate what’s-what the story that’s being told, it’s not actually my scene, it’s Elsa has a scene called, uh, she has a song called Let It Go which is done vibrato, you sing- have you guys heard it?…..it’s so good. But I mean, Idina obviously is a powerhouse and she just blows it out of the water.

But the song, you know, itself, happens at a point in the movie where her- the, the movie’s whole theme is this idea of, of fear versus love, and the one character that’s driven completely out of love and blind naivete and everything is great, and we’re going to be friends. Then you have this other character that’s absolutely paralyzed by fear. Because she shouldn’t be and she does it wrong and she’s not the norm and, you know, the movie is really about her embracing what makes her different, because that’s what makes her unique. And learning how to not let her fear of- let her fear paralyze her.

And this song, Let it Go, she’s finally all about herself, because you’ll see like her- what happens, yeah, she can’t be around other people, but she sings this song. And it’s just so overwhelming to me to- to- to hear the lyrics and know the emotion is just going like, you know what. I, throwing your hands up in the air, I am who I am. And that’s me. And I’m going to love myself. And I don’t care, I don’t care what anyone else has to say about it. And this is the time where I’m going to let it go and I’m standing here and here I will stay, because I’m going to- It’s the moment when she loves herself, and I just every time I watch it, I do that, because I just think it’s so beautiful. And it’s also layered with years of, you know, of being allowed to be involved in helping with this script and hearing the personal stories of people bring to the table. And going like, oh yeah, it’s really important that people accept themselves ’cause I knew someone that X Y or Z. And then, you know, that just all sort of pours into it when I see it. So singing and seeing her sing Let It Go is awesome.

Here’s a peek at how fabulous Kristen looked at the premiere (she is pictured here with co-star Jonathan Groff, who voices Kristoff in the film): 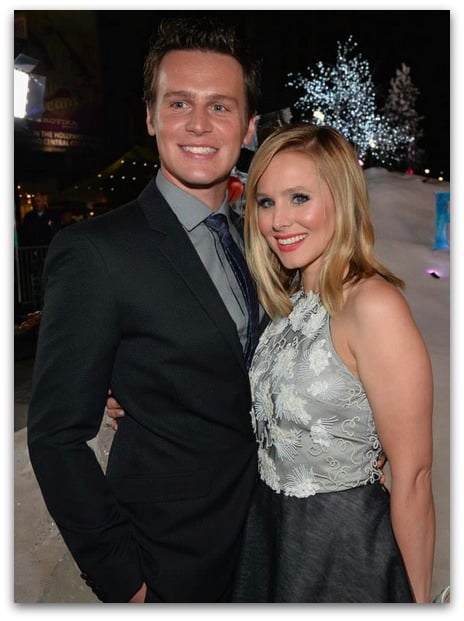 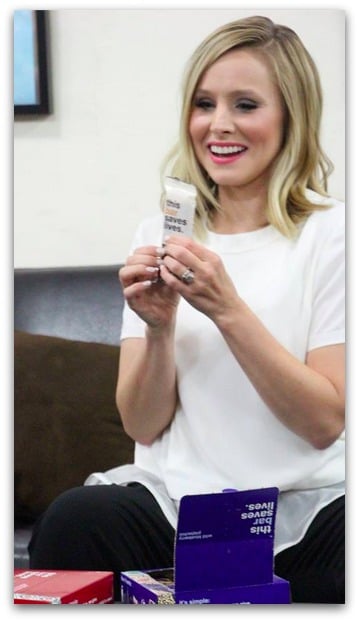 Kristen also shared with us a new company that has been started by a celebrity friend of hers. You might have heard of this project, it’s called This Bar Saves Lives, and it’s actually pretty cool. I thought it was pretty neat that she took time out of her interview to talk about something that is really bigger and better and more important than any of our first world problems… this bar helps feed the hungry and just take a minute to read more about on the This Bar Saves Lives website here and honestly, you will be moved. For every single This Bar Saves Lives bar that you buy, a child gets a life saving packet of food. Wow. Kristen shared with us some samples of these bars and they are REALLY good. And clearly… doing some REALLY amazing things in our world. I love that! How it works:

I really enjoyed the time we had with Kristen Bell and it was so fun to get a peek into the process of how these characters come to be. I loved her enthusiasm for the film and it really made me appreciate the emotional investment that goes into the making of these characters. I could see that Kristen deeply cared for her character, and the image that she was creating.

Oh and what about her singing in the film?? If you haven’t heard it yet, it’s fabulous! Darling, charming and talented… and really down to earth. There you go, you have my full permission to adore her, and I have no doubt that you are going to adore Anna in Frozen!!

Make sure to read my recap of my experience on the red (errr white) carpet at the world premiere of Frozen, and also make sure to follow all of the Frozen excitement:

« Love Pallet Signs
Disney Behind the Scenes: The Teams Behind the Magic of Frozen #DisneyFrozenEvent »