This original post was written right after the very first episode of Bunk’d aired! It’s exciting to update that the 100th Episode of Bunk’d premiered on Thursday, June 3, 2021 and even more exciting:

The long-running hit comedy series “BUNK’D” will return for its sixth season on FRIDAY, JUNE 10, 2022 at 7:30 p.m. EDT/PDT on Disney Channel and DisneyNOW

Executive director, Current Series, Disney Branded Television, Kristina Smith said, “Congratulations to the cast and crew of ‘BUNK’D’ on their amazing achievement. From day one, this series was a hit for us, and it continues to entertain our audience with an irresistible blend of relatable characters and funny, warmhearted storylines.”

Season six, titled “BUNK’D: Learning the Ropes,” begins as Lou, Parker, Destiny and Noah arrive at the soon-to-be Kikiwaka Ranch in Dusty Tush, Wyoming, where Lou must convince the surly owner, a.k.a. The Marshal, to officially sell the property to her. In the meantime, counselors Noah and Destiny have their hands full with the newly arrived campers, including Bill, a no-nonsense descendant of famous cowboy Bill Pickett who prefers roping cattle to hanging out with friends; Winnie, a fearless girl who’s earned the nickname Wild Winnie by breaking the rules and occasionally blowing things up; and Jake, a laid-back, easy-going boy who also happens to be a video-gaming fanatic.

“BUNK’D” is executive produced by Dunlap, May, David Booth, Valerie Ahearn and Eric Schaar and was created by Pamela Eells O’Connell. The series carries a TV-G parental guideline.

BUNK’D originally premiered July 31, 2015 (see my set visit from right after the first episode aired!) as a spin-off of the hit comedy series “Jessie” (2011-2015) and is currently in its fifth season.

The series revolves around the hilarious adventures of the campers and counselors at Maine’s rustic Camp Kikiwaka. 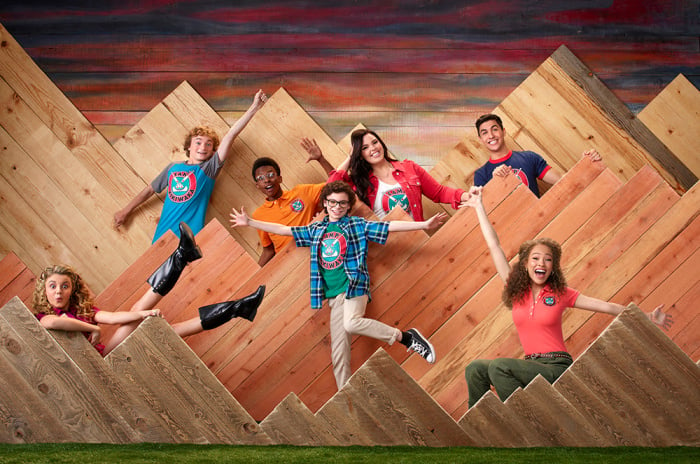 We absolutely love this show. We starting watching Bunk’d in the first season and loved the second season, third season and fourth season so much. I was really worried that there might not be a fifth season of Bunk’d (that’s a long time for a series to run, especially a spin off series like Bunk’d!) but this news that Bunk’d will now air for a sixth season is beyond exciting!

The whole reason we’ve loved Disney channel’s Bunk’d so much is that the cast of Bunk’d is incredible and many of them came from past Disney Channel shows and Bunk’d is a classic spin off series.

Filled with positivity and some of our very favorite Disney Channel stars, Bunk’d perfectly encompasses the things we love in good family television. In celebration of 100 episodes, here’s a bit of fun Bunk’d trivia for Bunk’d fans – you might enjoy quizzing your kids about these fun facts:

The fact that this show maintains a G rating and can have adults and kids laughing out loud is such a huge testament to the cast and writers – it’s so well done!! No wonder then that In 2021, Bunk’d remains a top 10 live-action cable series with kids 6-11 and top 5 with girls 6-11. 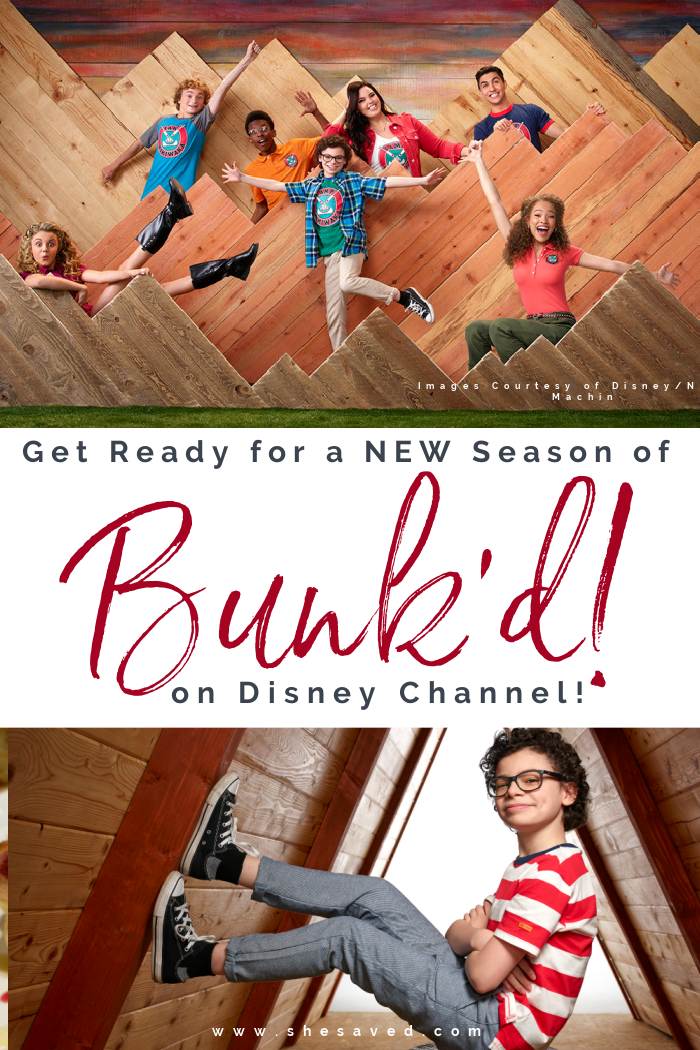 Episodes premiering during the special “BUNK’D” summer kick-off week are as follows:

Lou feels stressed about her chemistry assignment and all of her camp responsibilities, while her campers find themselves in some sticky situations.

Ava and Destiny compete in an elaborate marble race; Lou, Matteo and Noah head off on a road trip where they encounter Noah’s NASA-bound older brother.

Finn and Destiny look for a way to leave their mark on the camp; while meeting Matteo’s mother, Lou and Noah discover that he has a surprising skill.

“Dancin’ Up a Storm”

Lou drops in on her cousins at their family farm only to receive an icy reception to her surprise visit; Parker tries some creative methods to teach Finn how to dance.

BUNK’D” is from It’s a Laugh Productions, Inc. It carries a TV-G parental guideline. 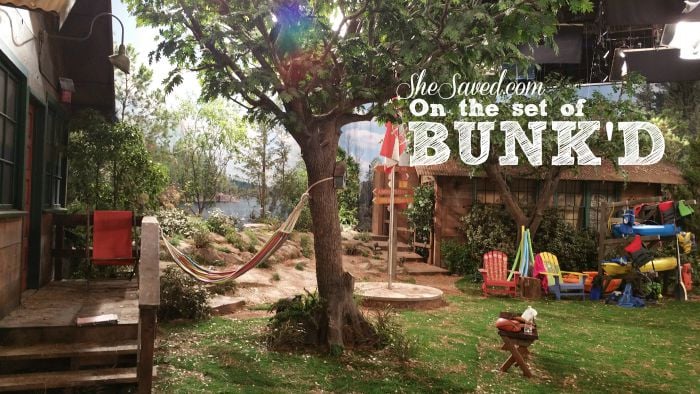 Get ready for Bunk’d on Disney Channel!!

If your kids love Disney Channel shows like mine do, then they are going to FLIP over one of Disney’s newest shows: BUNK’D. Make sure to mark your calendar (and gather up the kiddos!) because BUNK’D airs for the first time tomorrow night, Friday July 31st on The Disney Channel!

BUNK’D is a spinoff of Jessie, the Disney show featuring the Ross siblings. The popular Disney Channel show has such a large following that it’s no surprise that executive producers ( Pamela Eells O’Connell, Adam Lapidus, Phil Baker and Erin Dunlap ) ran with this entertaining series about the Ross kids coming from a wealthy family living in a New York penthouse to spend summer at a Maine camp.

Disney Channel’s Bunk’d stars some of your favorite Disney kids along with some new friends as they all head off to a rustic summer camp adventure and exciting summer camp in rural Maine called Camp Kikiwaka.

The Cast of Bunk’d

The Cast of Bunk’d includes Karan Brar (Ravi Ross), Skai Jackson ( Zuri Ross ) and Peyton List (Emma Ross ) are the three kids that are transitioning over to this new show, and will be joined by Nina Lu (Tiffany), Miranda May (Lou), Nathan Arenas (Jorge) and Kevin G. Quinn (Xander). Together these talented kids make up the cast of enthusiastic (and hilarious!) young campers at Camp Kikiwaka. 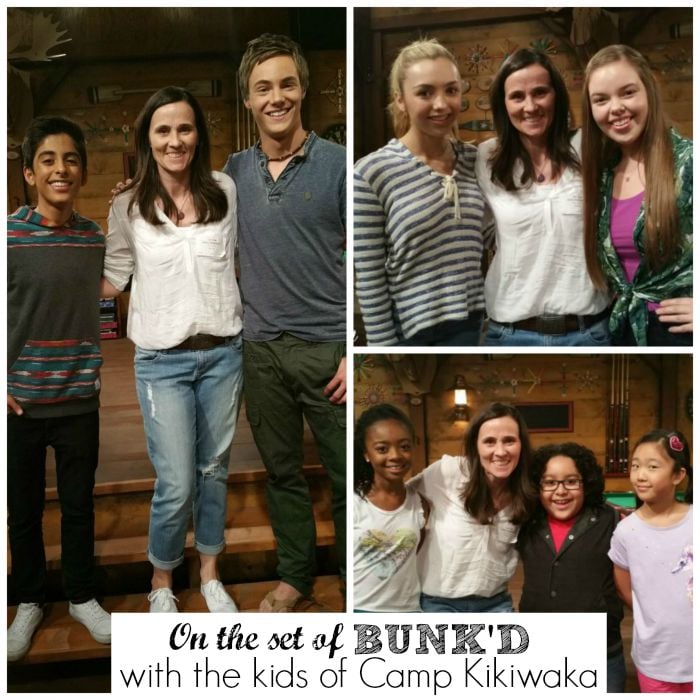 We got an exclusive first look at the set of Bunk’d and it was exciting to see where they were filming all of the new Bunk’d episodes.

I had so much fun checking out the BUNK’D set and chatting with the main cast members – what a neat bunch of young actors! Their enthusiasm for being part of this sitcom and Maine’s rustic Camp Kikiwaka was very apparent.

They are all so talented, friendly and very well spoken. We had the opportunity to speak with each one of them and I was so impressed with how open they were about their experiences and child actors, and it was also neat to see their true passion and love for their time together as well as their time on the set. 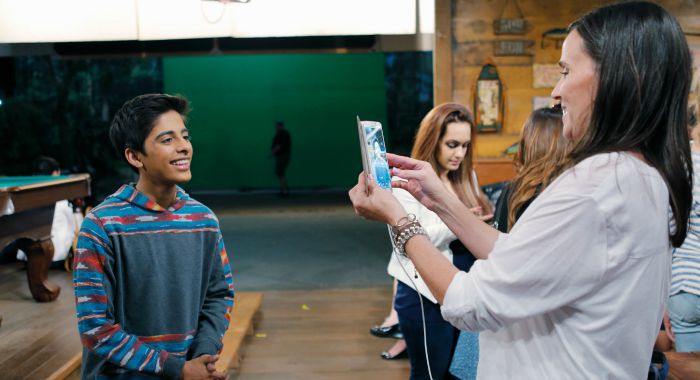 One thing that really impressed me, was that these kids were so easy to talk to and super friendly.

Here is a photo of Karan Brar recording a birthday message for my 8 year old daughter. He recorded the message as his character, Ravi Ross, and it was so impressive how quickly he can jump back and forth between Karan and Ravi – true talent! (Ravi has an accent, Karan actually doesn’t!) If you would like to see the birthday message that he recorded for my daughter, you can see it here. (needless to say, she was pretty excited!)

I’m pretty sure that Bunk’d will become one of our favorite tv shows as the sitcom energy on the set was high and it’s pretty hard not to get excited about seeing them all together again, old and new characters alike. 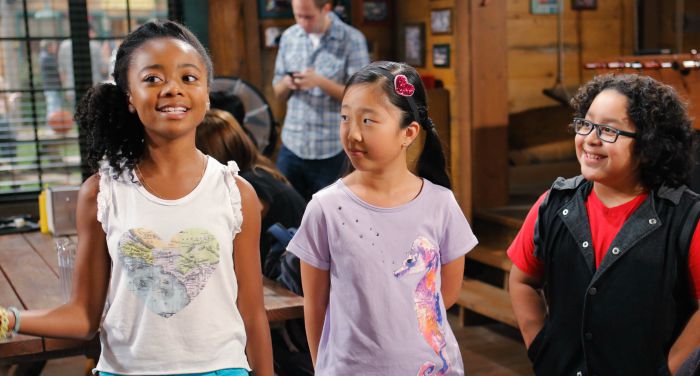 Again – so many familiar faces in this cast! You might also know Skai Jackson (Zuri) from Jessie, she is darling and she and her new cast members Nina Lu (Tiffany) and Nathan Arenas (Jorge) are as sweet and cute as can be! They also recorded a sweet message for my daughter (you can see that here – aren’t they too cute!!?) and I can’t wait to see them in this series.

And I have to mention, that little Nathan Arenas – I just wanted to take him home with me, he is the cutest little thing ever! No doubt he will steal some scenes! 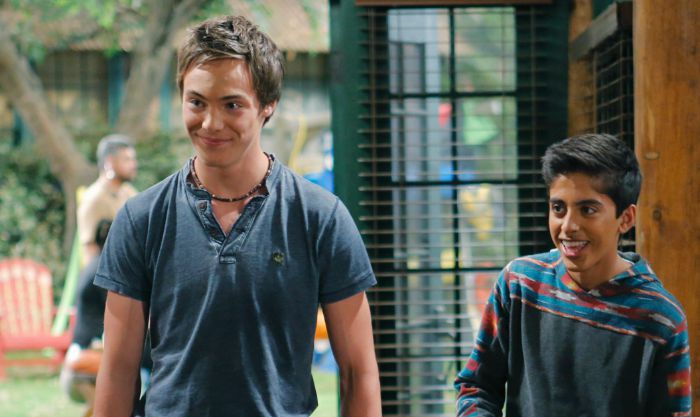 Kevin Quinn (Xander) and Karan Brar (Ravi) were very excited about their new adventures on the set of BUNK’D and I think that you are really going to enjoy their characters in this series. I was so impressed with them, such neat young men.

Xander will no doubt be the camp heartthrob and I’m sure that Ravi will entertain fellow campers (and the audience) with this charming personality and humor – he is such an enthusiastic actor with so much talent! 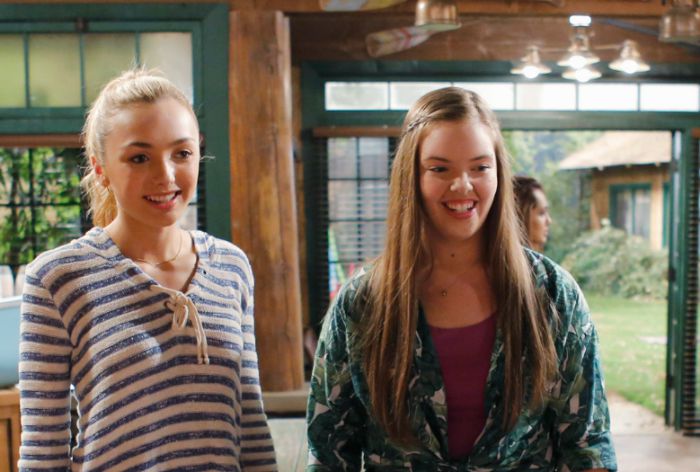 I was so thrilled to see List’s return to another Disney show – we’ve loved her in past projects and seeing her as part of the cast of bunk’d was exciting. Best friends with another of our favorites – Miranda May – is another reason we have been so excited about this new series.

Peyton List (Emma) and Miranda May (Lou) were so sweet! They are really wonderful young ladies – so warm and friendly and I’m so happy to have my children looking up to all of these kids. Now that I have met them in person, I can tell you – I am truly impressed! From what I have seen of the new series so far, Peyton’s character Emma is darling as always and plays an eccentric new camper.

Miranda joins Bunk’d and plays a very fun character named Lou who is a cheerful head counselor – you’ll REALLY get a kick out of her! Cheerful Lou brings so much light to the set and this series. We’ve actually been fans of Miranda May for quite a few years as we first discovered her talent when she starred in Disney’s Channels Liv & Maddie playing Lacey. (our love for Disney Channel shows runs deep!)

What I love most about these Disney shows, and this one especially – since I have met the kids and been on the set – is that they are simple story lines that kids can relate to. They take real life / real world situations and incorporate humor and life lessons in situations that young people can learn from while being entertained at the same time.

And…of course, I’ll be right there watching it with them!

Cast Members to Watch For

Another thing that I love about Disney Channel spinoff shows is that you can not only expect fan favorites and new faces, but you can usually count on some guest appearances as well. You’ll see favorite Disney Channel stars like Cameron Boyce (Luke Ross), Kevin Chamberlin (Bertram), Raven–Symoné (Raven’s Home) and I can only guess that we’ll see quite a few stars of Disney Channel come through this series as the seasons continue… who are YOU hoping shows up in a surprise visit on the set of Bunk’d?

If you love Disney Channel content, make sure to check out these other fun on set visits and interviews:

Here’s a little teaser clip to get you excited about this fun series:

BUNK’D airs Friday night, July 31st right after the premiere of the