Home » Disney » Incredibles 2: The Voices of Dash and Violet
0 shares 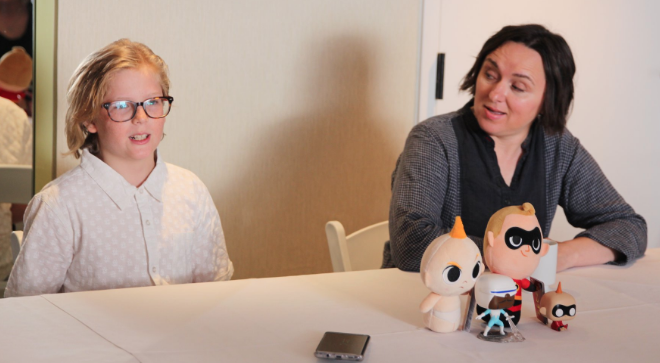 Incredibles 2: The Voices of Dash and Violet

Ever wonder about the SUPER kids behind the two older sibling super characters in the INCREDIBLES? I had wondered as well and had the amazing chance to interview them a few weeks ago while I was in LA for the INCREDIBLES 2 press junket. 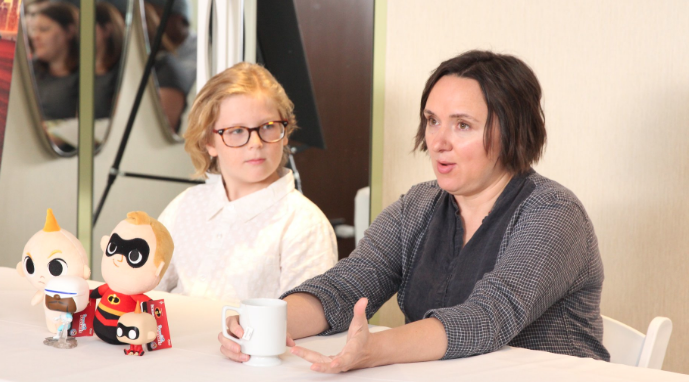 You might be as shocked as I was to learn that Violet isn’t played by a child at all. Violet is voiced by Sarah Vowell who also voiced her in the original movie 14 years ago. I had the amazing opportunity to sit down and chat with both Sarah and Huck Milner who plays Dash Parr. Huck is a child and interviewing the two of them together was a real treat and I got the biggest kick out of how even despite the age difference, they acted just like siblings.

Even though Huck just voices Dash in INCREDIBLES 2, he actually kind of looks like him as well. He shared with us that his favorite super hero is obviously Dash and that his favorite thing about Dash is that he’s fast. (duh!) 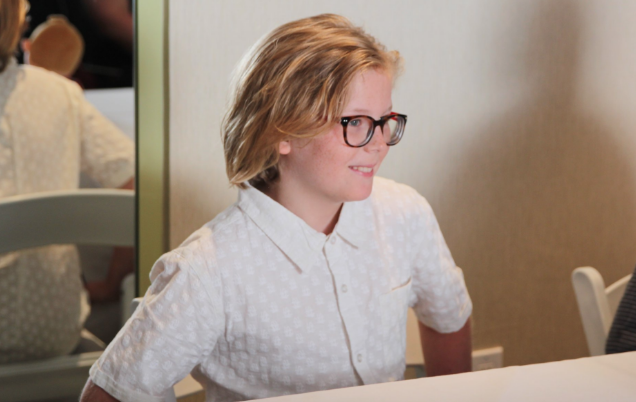 He also shared that he really had a great time doing the voice acting for his character thanks to working with Brad Bird in the sound booth.

It was actually really fun. Brad Bird made it really fun, and he just made everything really fun and it was really amazing.

I have to add in here that this was something that was mentioned in almost every cast interview. They all love Brad Bird and the way that he makes the recording process come together so wonderfully. Sarah added to Hucks thoughts about Brad, and I just loved what she had to say:

I just trust him so much, especially after the first film. He always uses the best take, and he is really entertaining. Because he’s the voice of Edna Mode, he is an exceptional voice actor himself. So, he does all the other parts.

He does such a good Holly Hunter impression that if he is doing Elastigirl’s part, I always laugh first because his impressions are just so dead on. It’s always really fun to do the things that come naturally, and for me that’s Violet’s sarcasm. She’s kind of a wise guy, and that’s what I’m like.

But Brad is very useful for the more emotional scenes. And I was brought up to hide that stuff when you’re around people and especially sound engineers. So, there’s a scene where Violet has to cry, and Brad was very delicate and very helpful with me and like really respectful. But, you know, because I trust him and because he really does believe in me. I had never acted before the first film, so that relationship, it’s been a third of my life now, I like being in that room with him.

I mean, for those of you who are older, you know the number of people who really believe in you and know what to do with you, it’s a pretty small number. And he has definitely been that for me.

You might remember my interview with Brad Bird for TOMORROWLAND (still one of my favorite movies!) I was so impressed with him then, and especially now after hearing all of the kind words and praise that this cast gave to him.

Of course, we were also curious to learn how they came to be part of the INCREDIBLES franchise. 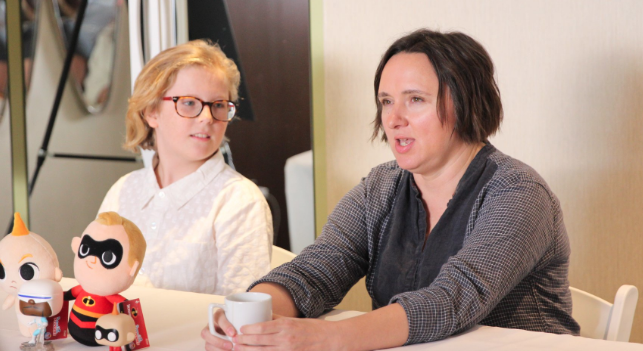 You might be familiar with Sarah’s work from This American Life and classic radio. She has such a distinct and wonderful voice and I really enjoyed hearing her share with us how her role as Violet Darr came to be:

They were casting or thinking about casting the first film, and I think Brad was in his car listening to the radio and heard one of my public radio documentaries and was so taken with the gravitas and maturity of my voice that he heard a junior high school student who becomes a superhero in that. People who are actors are like how do I become a voice actor? And I’m like … go into journalism.

Huck of course is a lot younger and his road to INCREDIBLES fame was short and sweet, as he explained:

When I was four my sisters were in plays. And they introduced me to plays. And when I got into plays I just really loved them. So, I just loved the theater and then I just got an agent and I went to auditions. I just really lucked out.

I really enjoyed chatting with these two and I think you are really going to enjoy them in this film!