I recently returned from LA where I screened INCREDIBLES 2 and had the amazing opportunity to interview some of the cast members. I was probably most giddy about my interview with Holly Hunter and Craig T. Nelson because I’ve been a long time fan of both. Getting to interview them both at the same time was a huge bonus because they had a wonderful chemistry and it’s Mr. and Mrs. Incredible, so of course it was amazing!!

Holly was just as adorable as I had expected she would be. She’s a tiny little thing but has a very bold and comfortable confidence about her. Craig was exactly as I had expected him to be, funny and friendly. The interaction between the two of them was amazing.

We dove right into the questions and of course, the most obvious question was to find out how they felt about this second movie finally coming to be fourteen years after the original. Holly was all smiles with her response:

I thought that it was quite amusing that the movie would pick out literally, like, fifteen seconds after the first movie. That was just so funny to me, and a completely and impossible thing to do in regular film. So this,  the ability of animation to do that was just so delightful.

Craig was hilarious when he joked that as time passed he was getting a bit worried that there might not be another INCREDIBLES movie:

The fact that we did the first one and we didn’t know what it was gonna be. The thing turns out to be huge, right? So we’re waiting to see when we’re gonna do the sequel. I’ve got that to look forward to maybe?… and the third year comes, and the fourth year, and then you’re going, well hell, I’m not gonna pay for the stuff I bought!

I was thinking, maybe Bob and Helen would be dead by then!

I also have to point out that Holly has one of my very favorite voices in Hollywood. She shared with us that if she doesn’t want to get recognized, she has to keep her mouth shut. Craig joked that people are constantly asking him if they went to high school together. I have to admit, sitting there chatting with them felt so familiar because they both have such recognizable and family voices.

The messaging in this movie is so good, especially in terms of family and parents working together to make everything come together. Very modern in the sense of working moms and dads who jump in and do their part. 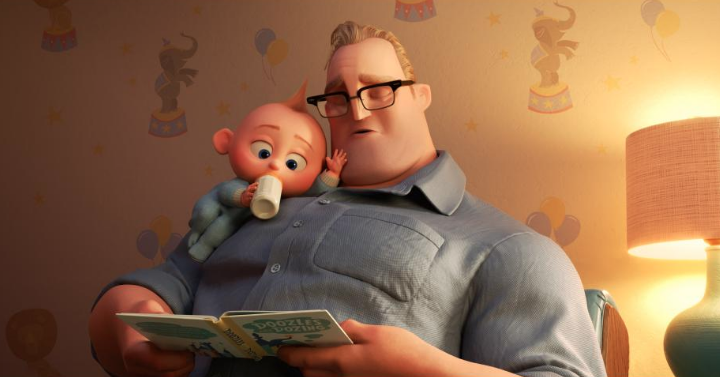 I loved how Holly spoke to this point:

It’s a great thing for kids to see this movie, not just little girls but, but boys, too. It’s great for everybody to see what men and women are capable of, that men are capable of being fantastic, nurturing parents. And as, as we all know this. I mean, this is not, this is not new for us, but it’s still great to see this, this exploration both for our characters.

And it’s fantastic and delightful to see Elastigirl living up to this gift that she has without any apology. She just is going for, and losing herself in it, which is a beautiful thing. I think also for mothers, it’s great for a mother to be able to be fully engaged in something that has nothing to do with parenting, and I think that that’s difficult for all of us to actually give ourselves license to just go that, that deeply.

Craig agreed with her on these points and true to their competitive character personalities jokingly added:

Elastigirl and Mr. Incredible are competitive, and they have this kind of, you know, go ahead and do it, and when you do it, do it well like I know you can do it, but when you fail, you know, I’ll be there. It also gives each other the freedom to explore their potential, and that’s what it speaks to, in terms of that.

But that’s one thing that I really love about both these characters. There is a friendly competitiveness but at the end of the day, it’s also a true “I’ve got your back” situation, and you could really feel that chemistry with these two as well.

Both Holly and Craig credit Brad Bird with the reason that this movie, and the original, came together so perfectly.

Craig and I, we record with Brad and only with Brad. So fourteen years later to encounter Brad again, you know, with a microphone between us was just fun. And he’s somebody that both of just inherently trust.

And I think that this has to be one of the reasons that this movie comes together so wonderfully, these personalities mesh so well and the end result is magic!

« Save on a Disney Trip: Halloween Time Hotel Deal
Lighting Up Our Summer Nights with Jasco Enbrighten Landscape Lights »