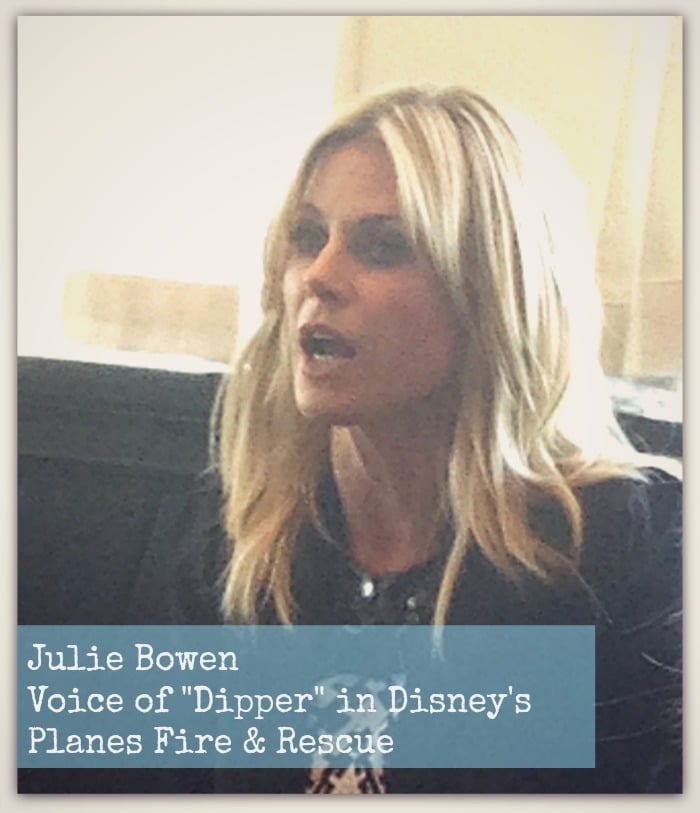 I recently travelled to LA for a press junket for the soon to be released Disney movie Planes Fire and Rescue. I shared with you last week my experience in the recording booth voicing “Dipper” (you can see that article here) but the REAL voice of Dipper is Julie Bowen, who you might know from her wildly popular role on Modern Family.

Julie met 25 of us (all bloggers) in a restaurant for a very laid back Q & A. In person she is beautiful, colorful, talkative, engaging and extremely entertaining. She has a very warm and genuine nature to her, and our interview was more like a chat among friends than it was “formal”.

Here are a few of the questions that she was asked about her role as the voice of Dipper in Disney’s Planes Fire & Rescue:

Q:Is this your first time playing an animated character?

JULIE:  For a movie, yes. I did a couple little quickie things. Like Scooby-Doo. They like the voice thing. So when I got an opportunity to do this, I saw how much mileage I got off Scooby-Doo, they were like worshipping me. So I’m genuinely excited to show off to my children.

Q:How was it to do animated versus Modern Family?

JULIE: Oh. So different. So different. I am not a trained voice actor. It’s just your voice, and if you aren’t getting across clearly, the humor, the message, the- the real sentiment, you can’t deny it.

Luckily they are perfectionists and they are so pro that they very quickly figured out that the best way to work with me was just let me go. And then some poor editor had to sit somewhere: I mean I was leaping around, swearing. The original Dipper had quite a mouth on her. But that- but to get to the like sassiness of- of the way that she thinks, I kind of needed to spout some garbage.

Q:Did you watch the film first and then voice it?

JULIE: They draw- it’s kind of like a rough sketch copy. Like a pencil drawing and then sometimes it’s more. It’s the pencil drawing against the backdrop. But what I see is just mostly some loose drawings in the very beginning.

Then I come back like six months later and they’re drawn more. And the cool thing is, six months or eight months later, they’ve taken all that spouting that I did in the booth, and running around and sweating, and they incorporate it into the character. And now they’ve started to draw her- her movement and her mouth and everything to fit that. And that was very cool to see. Somebody had to work very hard.

Q:Are you ever with other actors in the booth or always by yourself?

JULIE: No. I was always by myself. When I did Scooby-Doo it was in a room with a bunch of people. But, but those are serialized. You know, it’s weekly or however they do it. So they’ve got a much faster production piece. No, for Planes, I was completely alone. But luckily, Dane Cook’s part was completely done. So I could hear him, I could hear Ed Harris, I could hear everybody else.

And the finished result? Check out this awesome movie trailer and make sure to watch for the part featuring Julie Bowen as Dipper, a character that you are going to love:

Oh how I just can’t wait for you all to see this film… remember: