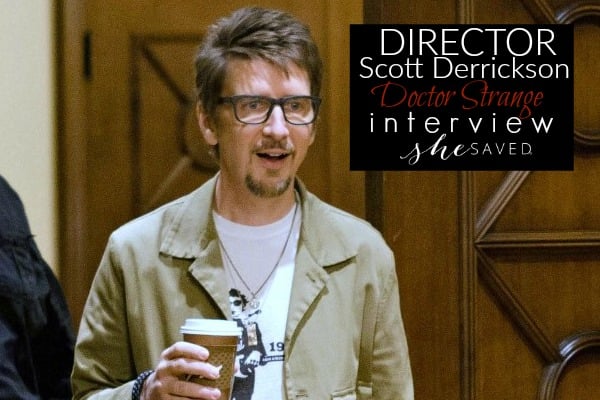 I have shared with you my Doctor Strange cast interviews these past few days, and today I am sharing my interview with Director Scott Derrickson. I expected him to be fantastic but what I didn’t expect was for him to be so down to earth. Honestly, from the moment that he walked into the room he was all smiles and so engaging. Even more than a director, he just seemed very relatable. He’s a dad, and I love how that actually effected some of his decision making in directing this film.

Having seen the movie the night before the interview, it was easy to jump right in with questions, the first one being the influences that he relied on to create this film.

The ’60s comics were the primary influence for the movie, for sure. Those early Stan Lee, Steve Ditko comics, which were very much products of the ’60s, and the ’60s psychedelia, the weird imagery of the movie is so rooted in the Steve Ditko artwork from that era. I listened to almost nothing but psychedelic rock from that era while I was working on this screenplay. It’s why there’s one Pink Floyd track in there from the first Pink Floyd album, back in their early psychedelic days.

What I wanted to do was to not to make a throwback movie, or a nostalgic movie. I didn’t want to try to go back and recapture the ’60s revolution feel, but I wanted to have that same mindset of open your mind, expand your mind, see things new. Look, you know, look at a new aesthetic. Explore possibilities. That was the goal. Take that ’60s mentality, and then bring it into a modern superhero movie, and do it with a with a character who was about something, hopefully meaningful. 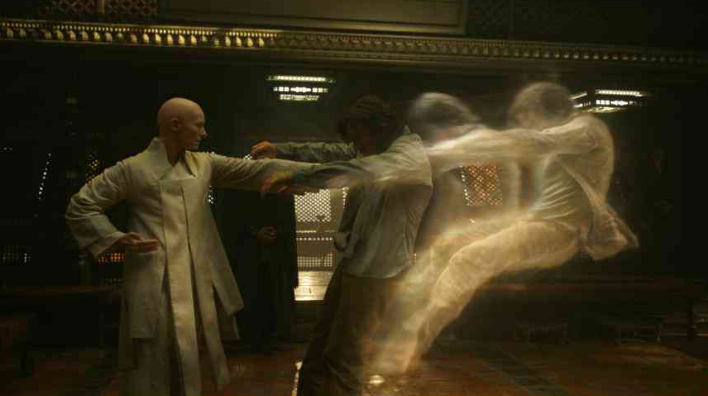 That leads us to my favorite conversation. When asked about his decision to select a woman (Tilda Swinton) to play the role of The Ancient One, Derrickson explained that this decision was not one that was taken lightly.

That choice was twofold. The first reason was because I was trying to find ways, creative ways, and positive ways, to escape the racial stereotypes from the original comics. You know, they were products of the ’60s for good and bad, those comics. For bad, the Ancient One, and Wong, those two characters were pretty offensive racial stereotypes, by modern standards. Wong’s character, I was able to completely reinvent. I sort of inverted his character. Everything about his character in the comics, I just flipped on its head. Instead of a man servant, he’s a master of the mystic arts. Instead of a sidekick, he’s Strange’s intellectual mentor. You know, so that was great. With the Ancient One, I couldn’t really do that. The Ancient One, for the story to work, still had to be a magical, mystical, domineering, martial arts mentor, to Doctor Strange.

So the first thing I wanted to do is make it a woman. And I thought, okay, that’s fresh. And I did that to get away from the cliché and the stereotype, but I also did that because I wanted a woman Tilda’s age. You know, I wanted a woman who wasn’t the, you know, the 26 year old, tightly leather clad, you know, hot, fan boy dream girl. I wanted to have a real woman, in the movie, in terms of trying to get diversity in there. I thought about casting an Asian woman. We had lots of discussion about that, but I couldn’t get away from the stereotype of the Dragon Lady.

I came up with the idea in my head about Tilda doing it and suddenly the role came to life, and I wrote it, without her knowing anything about the movie or knowing that I was interested in her doing it. I wrote it for her, and it was great. And I remember bringing the script to Kevin, and handing it to him, saying, okay, this role is great now, but it has to be Tilda Swinton that plays it. And if it’s not her, we’re going to have to rewrite it again. Because I didn’t feel like anybody but her could do the role as I wrote it.

Swinton wasn’t the only character that Derrickson was counting on. He actually got all five of his first choices for the five leading roles!

The five lead roles, and this is very rare, but the five lead roles, we got our first choice on every one of them. I don’t think that’s ever happened for me, you know, where our first choice for each role, we were able to get. It usually doesn’t happen, for no other reason than because of availability. But it just turned out that all of our first choices were available, and you know, they all wanted to do it, when they heard what the movie was. Once we got Benedict, of course, he’s kind of an actor magnet.

After seeing this film (my review is coming soon!) I was so thrilled about the messages that audiences young and old will take from this film, but honestly mostly excited about the potential for these messages to reach young fans. I had the chance to ask Derrickson about that and I love that he told me that he hadn’t yet said it in the media, but his two young boys were a driving force in this film.

I haven’t said this to anybody, but you know, my biggest personal motive for making the movie is that I have two boys, you who are now 13 and 10. They were 11 and eight when I started. They’re Marvel fans, huge Marvel fans, you know? And I wanted to make a movie that would surprise them, ybut also a movie that would leave an impression on them, of what I think are some of the most important things in life. That’s where a lot of that came from. 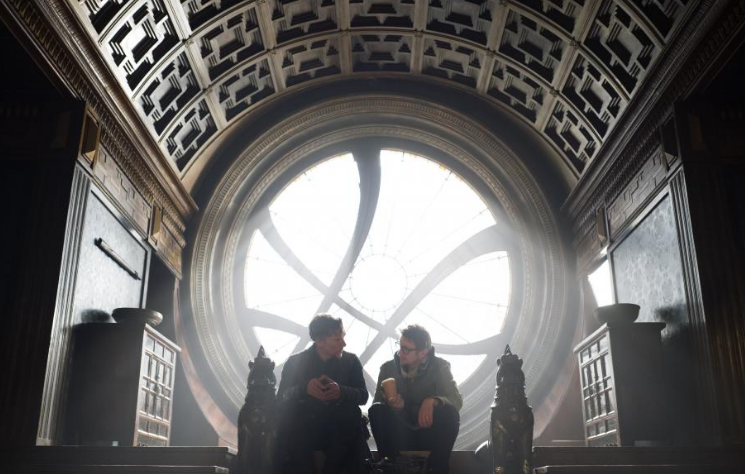 Of course Derrickson discussed his favorite scene in the film, but I’m not going to reveal that here, it would be too much of a spoiler. I will though, share with you what he said about “the scene” that is his favorite – and why it is his favorite, without giving anything away. Trust me. You will know “the scene” when you see it!

I love that scene. Audiences pay for to see spectacle, in these kind of movies. They pay to see these big visual effects, overwhelming scenes, and action, and fighting, and all of that. But whether or not they like a movie is whether or not it moves them. And whether they like the character, and whether it moves them emotionally. And that, that scene feels like the heart of the movie to me.

This conversation brings us to discussing what it is that he hopes audiences will bring away with them from this film. I love his answer:

The idea of this character who has the wrong values. He has everything, thinks he has everything, but his life is shallow. He’s a materialist. He’s self-centered, he’s bad at relationships. He’s ego-driven. And, then he loses everything. And through this trauma, through this gauntlet of pain and suffering, he transforms into something better. I love that the movie’s about that. I love that the movie’s about how pain can dislodge you from what’s bad about your life, and push you into something better.  Because he becomes a much better person as, as a result of the worst thing that could happen to him, happening. As a result, he goes from this selfish, skeptical, materialistic guy, to this unselfish, altruistic, mystic master of the mystic arts, who wants to now save people for better reasons than he did in the past. 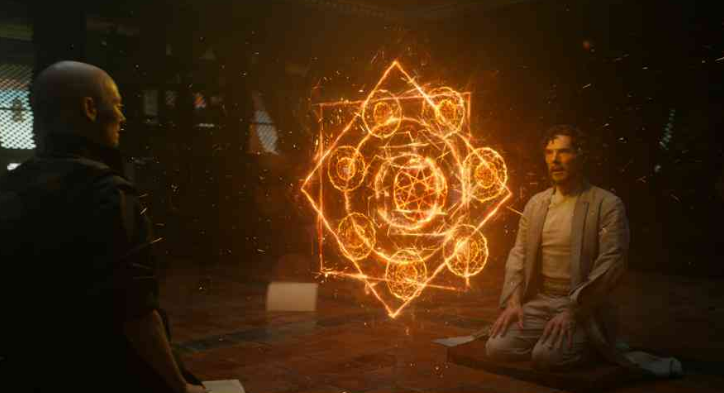 I must add, that the visual effects in this film will absolutely blow you away. And, according to Derrickson, this isn’t something that could have been done just a few years ago. Honestly, it almost feels futuristic while you are watching it.

I don’t think that we could’ve done that, even three or four years ago. It’s like, visual effects have finally caught up with Steve Ditko, you know? You haven’t seen that artwork ripped off in other movies, because you couldn’t. I mean, you literally couldn’t do it, even if you wanted to. And the time was right. The technology, is one of the reasons why this movie works, it’s finally a time when we can do this kind of crazy stuff.

I really loved this interview so much, and after seeing his own personal passion for this film, it makes me love it even more! I can’t wait for you all to see this film, and in the meantime, here’s a sneak peek:

Make sure to read my other interviews from Doctor Strange cast members, including Tilda Swinton (“The Ancient One”), Benedict Cumberbatch (“Doctor Strange”) and Rachel McAdams (“Christine Palmer”).