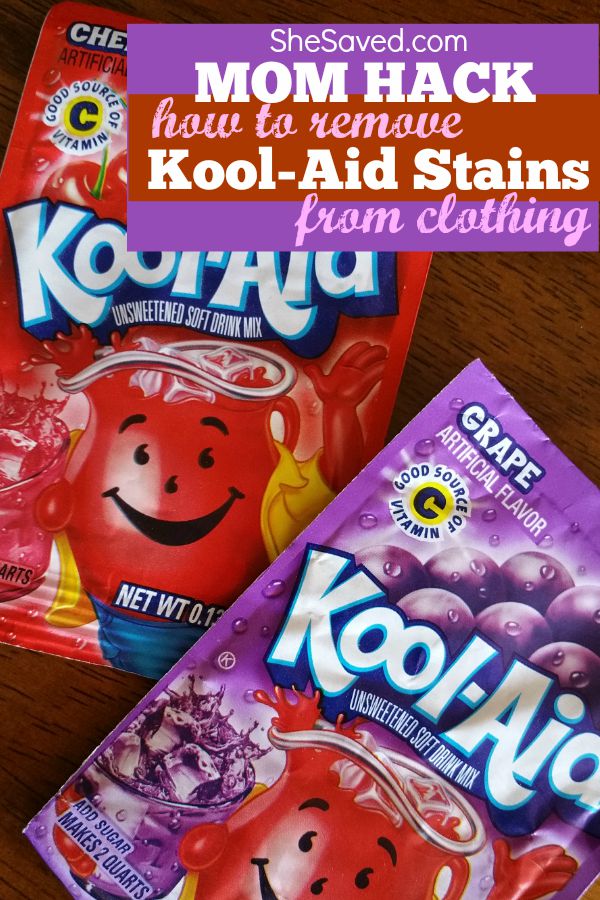 A few weeks ago, my daughter and I found a fun hair dying experiment in a magazine. The not so very clear directions suggested using Kool Aid to dye the ends of your hair for a fun and temporary look. It was summer and I thought it would be a fun “beauty shop” thing for us to try. On that note, I can’t say that I recommend the Kool Aid hair coloring experiment, as we never did figure out how to make it work, and instead got side tracked with our new “how to get kool aid stains out of clothing” experiment!

I have very little experience with Kool Aid, so I didn’t put too much thought into what might happen if the very red Kool Aid were to stain her very white (and new!) t-shirt, which of course, it did! I was so sad and frustrated, and I literally jumped into action to try to get these stains out and NOTHING was working. How to get Kool Aid stains out of clothing? I tried vinegar. I tried hydrogen peroxide. I tried Oxy Clean. Nope.Nope and NOPE.

How to Get Kool Aid Stains Out of Clothing

I was literally resigned to the fact that we might have to dye the entire shirt pink (which actually led to a video: How to Dye T-shirts with Kool Aid video,  which I’ll be sharing on the blog soon!) when my hubby suggested trying VERY hot water. He, being a veterinarian, is quite skilled in the stain department, which is why I went to him with my Kool Aid stained clothing problem. I have no idea why that sounded so crazy to me, but at this point, I had nothing to loose.

I boiled water and then used the pot to pour the water right over the stains and you can imagine my shock when that hot water literally washed the red Kool Aid stains away! Just like that.