Wondering how to make Fluffy Slime? I’ve got a no-fail recipe for you that is not only easy to make, but affordable too!

This is a slime recipe made with shaving cream and it’s one of our favorites because it makes the fluffiest slime!

I’ve shared quite a few of our edible slime recipes, but here’s one that is a favorite for holidays, it’s a really fluffy slime and in this case, a fluffy slime recipe that is perfect for fall because it’s a wonderful orange color and also happens to be super easy to make. 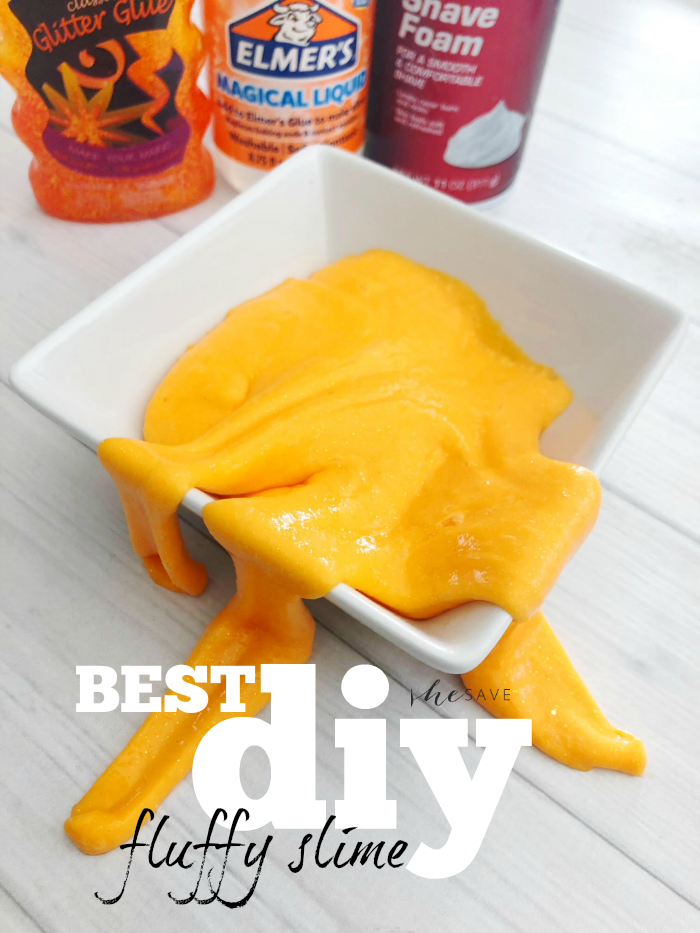 Have you tried making fluffy slime? I feel like we’ve tried all of the slimes but in our search for THE fluffiest slime, we kept coming up empty handed.

Until we recently discovered Elmer’s Magical Liquid and let me tell you, it’s a slime game changer. We’ve tried all kinds of slime activators and this fluffy slime recipe uses minimal ingredients for the perfect kid’s craft activity!

I’m sure the Elmer’s Glue folks are laughing all the way to the bank with whatever magical solution this is, but kudos to them because it is so much fun! It makes some great slime and has really cut down on our slime “that didn’t go so well” recipes. I love how simple this slime ingredients list is! 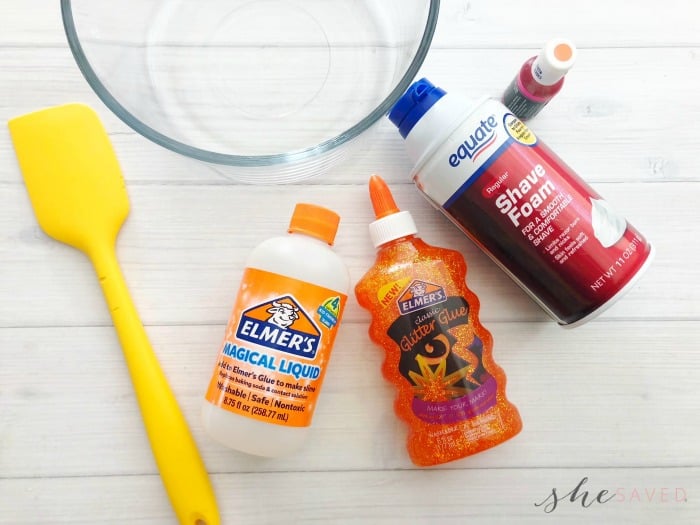 This fluffy slime recipe is made without sodium borate, which was important to me. We had been trying a few different variations – including saline solution slime, liquid starch slime, corn starch slime, borax powder slime, laundry detergent – even slime made with cups of shaving cream! When I say we’ve tried ALL the DIY slime recipes, I’m not kidding! Unicorn slime, fluffy slime, glitter slime – ALL of the slime! I’ve purchased all of the contact solutions, purchased slime kit after slime making kit – played with slime over and over again until we finally landed on this recipe which is slime perfection! We finally realized that there is no need to buy a slime kit when you can make your own at home with a little color glue and motivation!

How to Make Fluffy Slime

Finding the right slime recipe for you is a bit of a science experiment in itself, but this homemade fluffy slime recipe wins out every time because with just a few ingredients (three cheers for affordable elmer’s glue!) and you can easily make different colors in both small and large quantities. It’s the perfect kid’s craft and a fun way to enjoy the slime craze without breaking the bank! 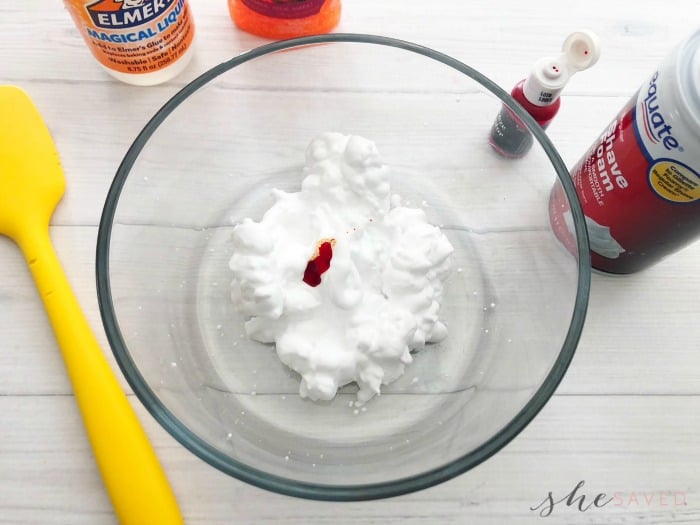 1. Measure out 1/4 cup of shaving cream and mix in a few drops of orange food coloring into a large mixing bowl.
2. Empty your bottle of Elmers glue into the mixture.
3. Mix well with a spoon or spatula.
4. Measure out 1/4 cup of Elmers magical liquid and add it to the glue mixture.
5. If your slime is still sticky, slowly mix in up to another 1/4 cup of Elmers magical liquid a little at a time.
6. Remove slime with your hands and knead until not sticky.
*if it’s too sticky add magical liquid in tiny amounts until not sticky
*you can adjust food coloring to get your desired color 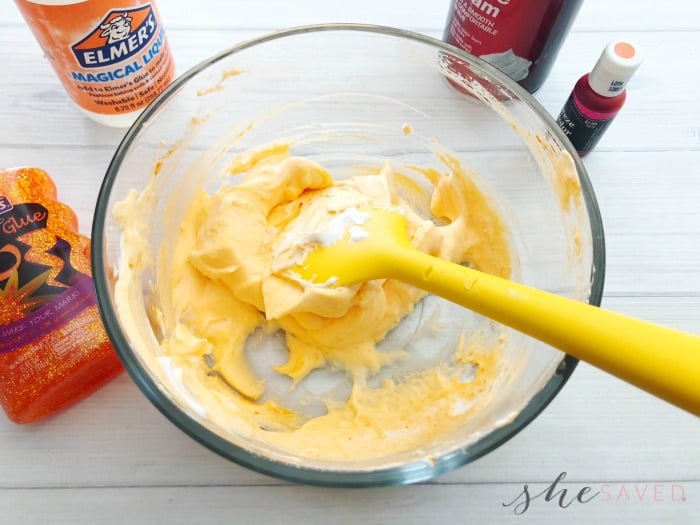 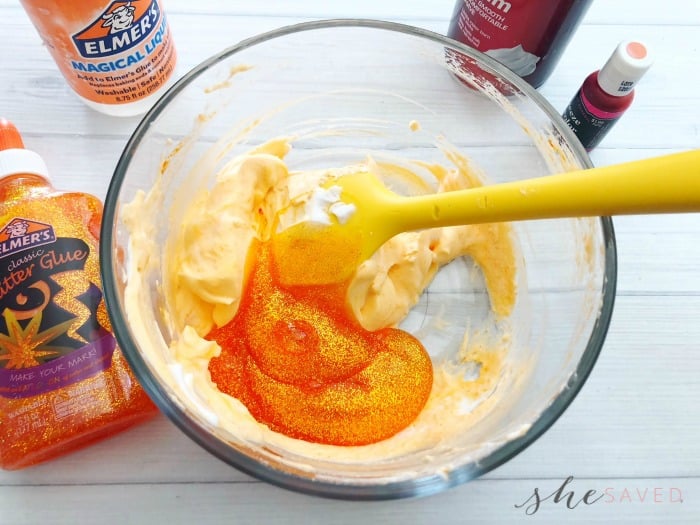 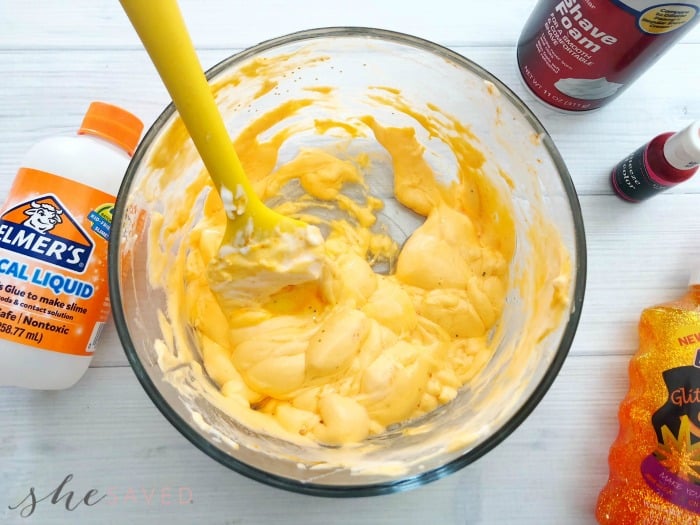 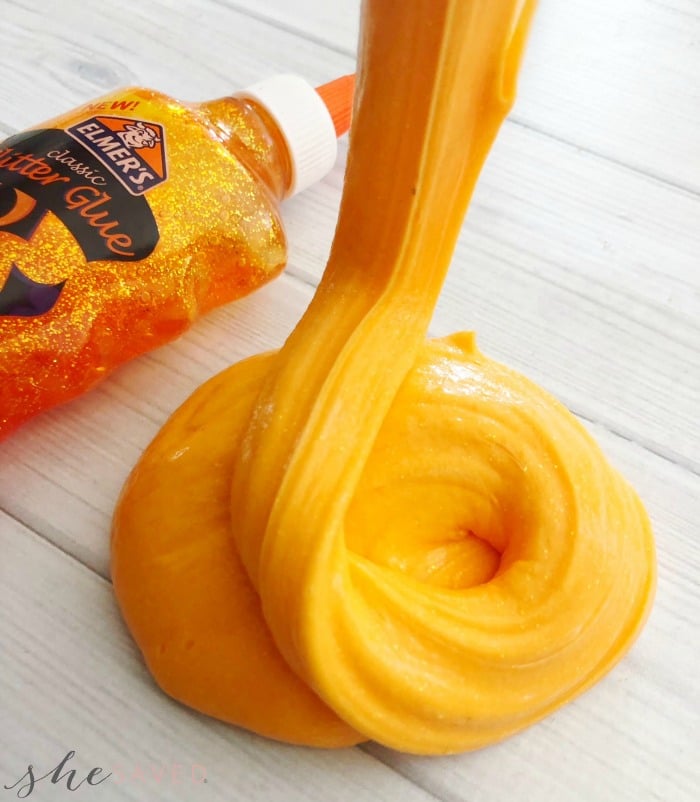 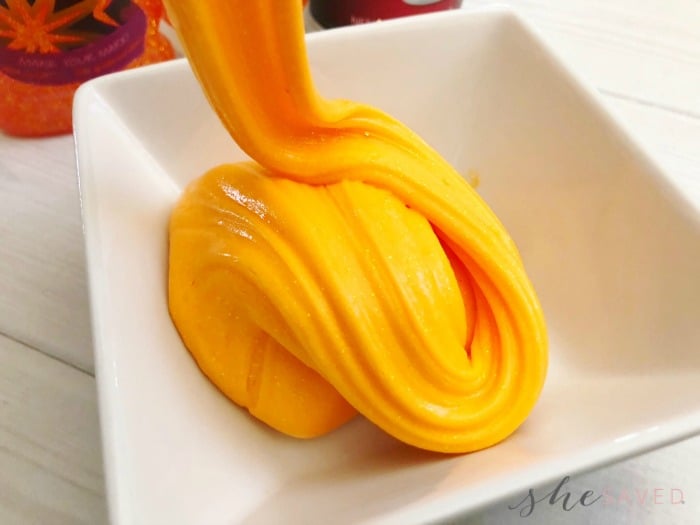 Elmer’s Glue Slime is the BEST!

My daughter has tried so many slime recipes and she’s been wondering how to make slime fluffy, and this magic recipe definitely did the trick, this is by far the fluffiest slime we’ve made!

We love making slime and I was so happy to find a slime recipe that doesn’t include boric acid, contact solutions, baking soda – you know – all of those things my kids have been using for the past few months to make ALL of the slime add ins!

I feel a lot better about that fact that this one uses school glue and just a few other simple ingredients to make super fluffy slime that the kids love!

How to Store Slime

Are you wondering how long your fluffy slime will last?

We highly recommend storing it in an airtight container for best results, but even then, we’ve found the that best slimes have a shelf life of about a week. It’s a good idea to keep a close eye on them to make sure they stay fresh.

With this fluffy slime, the slime is never as fluffy as it is on that first day so enjoy that extra fluffiness when you first make it!

I’m also not a fan of glitter slime recipe (gah.. glitter!!). I do love colorful slime, and so do kids – so I think that’s why this fluffy slime is such a win. This type of slime is affordable and great for young kids. We’ve found it to be the perfect fluffy slime recipe and let me tell you, fluffiness matters!

When it comes to sensory play, the texture of your slime is what kids (and adults) enjoy the most. That’s why I think homemade slime recipes are so popular. Regular slime is great. But fluffy slime is better!

If you aren’t looking for white glue slime, maybe you would like some of our edible slime recipes. I like those because I can usually find most ingredients at the dollar store. They aren’t toxic. And they usually smell really good too!

But most of all – when it comes right down to it – easy slime recipes will be the best for both your budget and your sanity – and still be the perfect way to enjoy a fun activity with the kids! I’m always looking for new ways to have the best time and I usually find that happens when I simplify things.

Like I said, we’ve tried them ALL and hopefully this can help you to decide on the right slime recipe for you slime adventures! 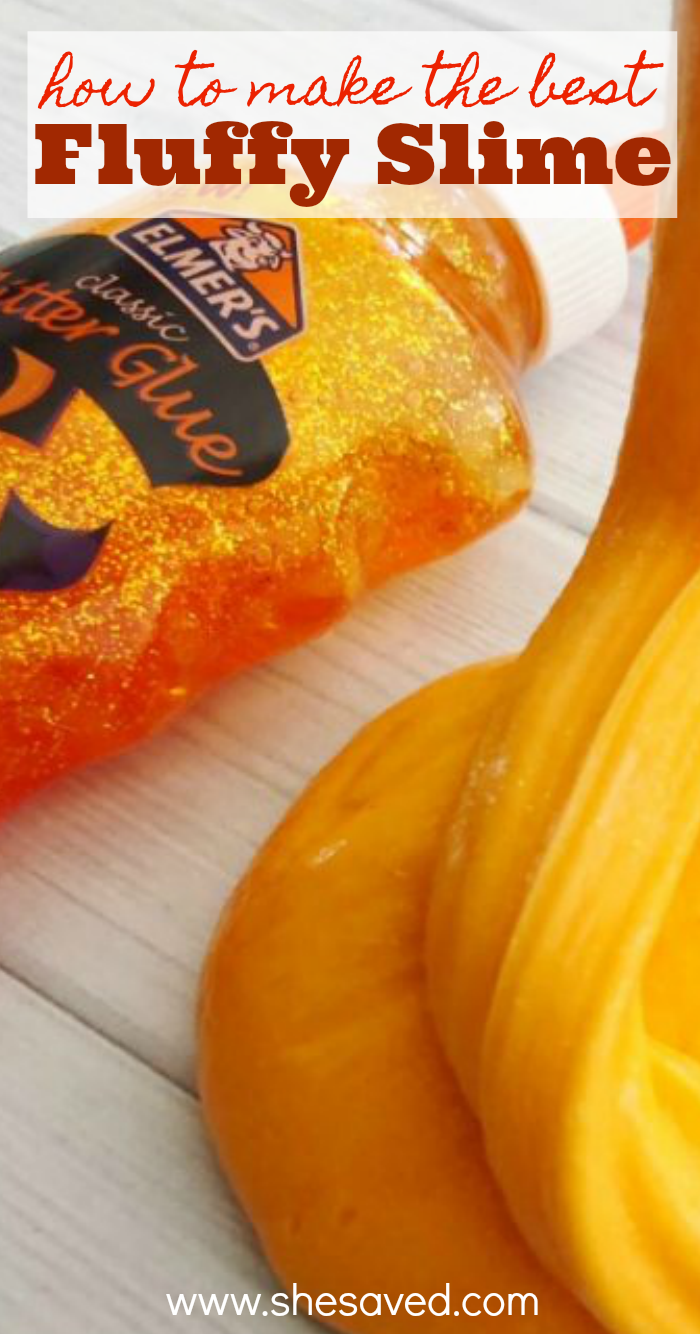 Print the Recipe for Fluffy Slime

She Saved, LLC is a participant in the Amazon Services LLC Associates Program, an affiliate advertising program designed to provide a means for sites to earn advertising fees by advertising and linking to Amazon.com and MyHabit.com
Skip to Instructions
444 shares