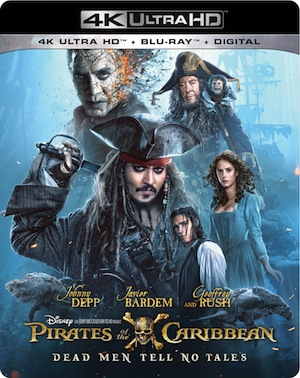 Pirates of the Caribbean: Dead Men Tell No Tales Out on 4K Ultra HD and Blu-ray Today!

Pirates fans! Today is your chance to grab Pirates of the Caribbean: Dead Men Tell No Tales which is out on 4K Ultra HD and Blu-ray Today!

Pirates of the Caribbean: Dead Men Tell No Tales is a rollicking new tale of the high seas, infused with all the elements of fantasy, humor and action that have resulted in an international phenomenon for the past 13 years. Johnny Depp returns to his Academy Award®-nominated role as the outrageous, swashbuckling scoundrel Captain Jack Sparrow, and is joined by Oscar winners Javier Bardem and Geoffrey Rush.

These movies are so fun and as my kids are getting older, these are the types of movies that we really enjoy watching as a family. Captain Jack is a hit around here and this latest movie did not disappoint!

As always, one of our favorite things about these movies are the bonus features and they included some AMAZING ones this time!!