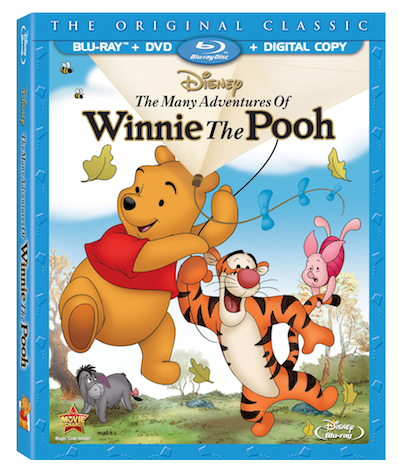 The Walt Disney Studios proudly celebrates the heartwarming animated classic that started it all – “The Many Adventures of Winnie The Pooh.” Available August 27th for the first time on Blu-ray™ and HD Digital with a variety of bonus features, a whole new generation will fall in love with Pooh and his friends from the Hundred Acre Wood.

Whether we’re young or forever young at heart, the Hundred Acre Wood calls to that place in each of us that still believes in magic. Share all the fun, whimsy and wonder of The Many Adventures Of Winnie The Pooh in this amazing original Disney classic – now digitally restored and remastered in high definition to thrill a whole new generation!

Once again reuniting audiences with Pooh, Tigger, Rabbit, Piglet, Owl, Kanga, Roo and last, but certainly not least, Eeyore (who has lost his tail).

Bonus Features PLUS a FREE Kite! The Many Adventures of Winnie the Pooh Blu-ray Combo Pack release has been sweetened to include a robust list of extras including a groundbreaking Disney Intermission activity, the beloved theatrical short “A Day for Eeyore,” five all-new “Mini Adventures of Winnie the Pooh” short films, and….an exclusive free in-pack kite. Bonus features include:

NEW! Disney Intermission – Press “pause” during the movie and find out what happens!  The narrator invites younger viewers to play along with the Hundred Acre Wood friends in a variety of engaging activities.

·       NEW! Pooh Play-Along – In this bonus feature, the narrator invites viewers to play along with Pooh and his friends.

·       LEGACY  “The Story Behind the Masterpiece” – Making of Featurette

Where to purchase? You can purchase Disney’s The Many Adventures of Winnie the Pooh Blu-Ray Combo on Amazon right now for $24.96!

Our thoughts? I have always been a fan of Winnie the Pooh… he is such a sweet character and I just love the simple whimsy of this silly old bear and his friends. The color and sound in this dvd is amazing, and the bonus features are wonderful. I LOVE that they included a free kite in this bundle, and while it’s small and simple, these are the things that kid’s just love and my kids were no exception. They shared this dvd with a toddler friend and they had a ball showing him the kite and trying to fly it. (trying is the key word, as we didn’t have much wind, but they sure had fun!) and they also ended up hanging the kite up in his room for decor, which turned out darling!

The Giveaway: And now for the VERY best part… ONE lucky She Saved reader (US Only please and sorry) will win their own The Many Adventures of Winnie the Pooh Blu-Ray Combo Set.

… I will leave this giveaway open until Tuesday night at midnight, September 17th (mnt time) … once closed, I will select one winner who will have 48 hours to contact me to claim their prize! GOOD LUCK!!