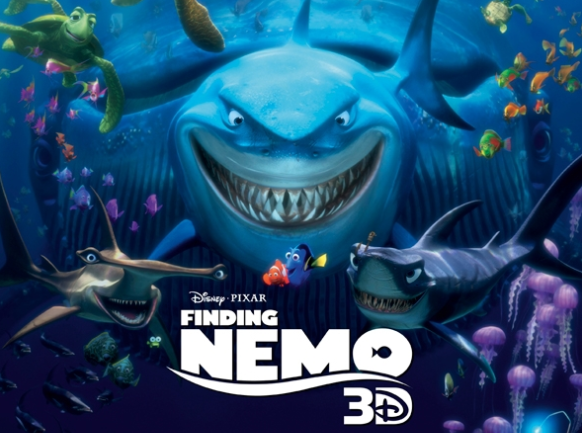 In theaters THIS WEEKEND…Finding Nemo 3D and let me tell you… it is SO worth seeing!! I had the opportunity to review this movie as part of the Disney In Home Bloggers trip that I attended in California last month and I am so excited to tell you about it!

What makes the 3D version so special? I actually had not seen a movie in 3D before. (ok, well I take that back. I faintly remember a seeing a movie in the 90s with some funky (dorky) cardboard glasses that had one red eye and one blue eye and it gave me a terrible headache) So … I had no idea how far 3D had come, and I also had no idea just how comfortable and even relaxing on the eyes that a 3D movie would be. Finding Nemo 3D was almost therapeutic as the scenes were so beautiful and exciting. And although I am pretty sure it is the exact same movie/story as we have seen over the last decade, I kept feeling like I was seeing, and even hearing, new things. It really does feel like a new experience when you see it in 3D!

As an added bonus, we also got to see Disney’s short film, PartySaurus Rex. One word: Hilarious. Ok, second word: AWESOME. This short film had me dancing in my seat and I didn’t want it to end… so charming and LAUGH.OUT.LOUD funny. Here’s just a sneak peek at this fun little movie, take a minute to watch this, it will put a smile on your face, I promise:

Trust me… treat yourself to a heart warming experience and see these awesome films as they hit theaters this weekend, September 14th!

Stay tuned as I have even more to share about my trip to California, including more from Disneyland, Disney Toons Studios, , a fun interview with Crush (Turtle Talk), an exclusive meet and greet with Tinker Bell & Periwinkle … and so much more. You can see my previous post about my time at California Adventure and Carsland here and my Cinderella blogger makeover and consumer products post here.