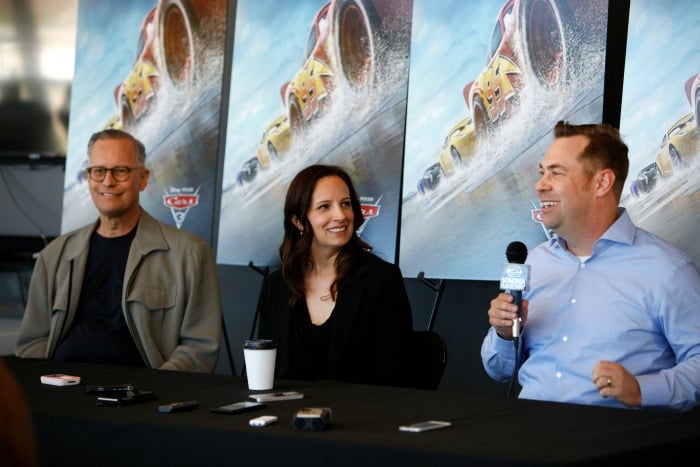 Meeting the Filmmakers of CARS 3 #CARS3Event

Last month I spent an entire day at the Sonoma Raceway in California participating in a Cars 3 press event. It was a super fun filled day that was topped off with a press conference interviewing the filmmakers! The press conference took place in a gorgeous suite above the track, as you can see below and included some fascinating conversation with Producer Kevin Reher, Co-Producer Andrea Warren and Director Brian Fee.

Having the press conference right at (above) the track only added to the excitement. You could hear cars flying by and engines roaring as the filmmaker answered questions and recalled their experiences making this film.

As you might know, Cars 3 takes us on the continued journey of Lightning McQueen’s racing career. As a superstar, he McQueen faces the inevitable reality that we all face: time goes by. He’s grown older and there is a new generation of younger cars on the track. This isn’t a new problem of course, but it’s a great story that everyone can relate to and Director Brian Fee shared with us just how they approached this storyline:

With McQueen, it just took a little research, we started talking to Jeff Gordon, we started to talking to other athletes and we started seeing people who were at the top of the game who were big celebrities, who had it all and, and they’re facing you know, the, the expiration date that all athletes have. And quite frankly, we also felt like we feel that way. We felt like as an artist, new, new, new artists, young artists, interns come into the studio and they can draw better, better than I can, they can draw better than I can now, let alone when I was their age.

So, I think all of us, I think everybody in the world probably has that feeling that they know what it’s like for someone younger to come in and not, and next generation and can, you can start to feel like you are no longer valid anymore.  So if seemed like an honest thing to latch onto.

As a first time director, Fee shared with us how he approached the creation of this film and how he relied on team members to bring it all together under his direction:

I leaned on everybody as much as I possibly could you know, being a first time director I spoke a lot to other directors.  Picked their brain you know, I would buy them lunch, find out what they wished they knew when they were in my shoes.  And then I relied heavily on the leads of all the departments because that is one of the benefits about working at Pixar is every department is run by experts.

Obviously a ton of time, energy and research goes into making these films and that of course means hours and hours of work and commitment to getting it all right. Kevin Reher shared with us that there were over 250 people working on this film.

When you get a glimpse at the people behind these movies, you really start to see the passion and drive that brings these together. These people eat, sleep and breathe these movies until they are finally on the big screen. 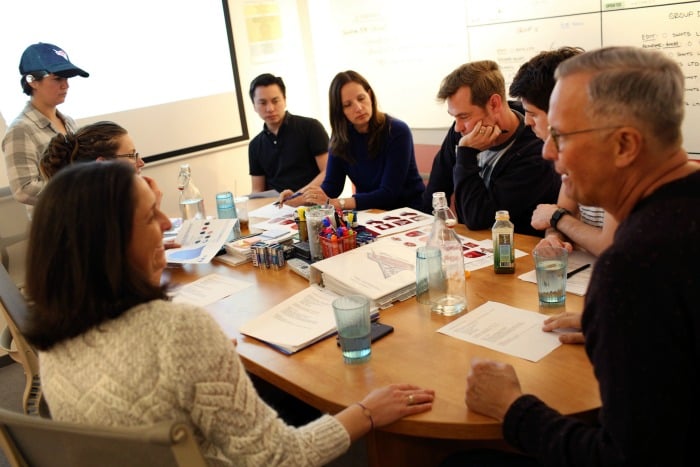 I loved hearing how each of these filmmakers related to the movie in different ways. As you will see, some new characters change up the Cars dynamic and one such character is Cruz Ramirez. Andrea Warren shared with us that she related to Cruz the most, and enjoyed working on the development of her story as a bit of a underdog or outsider.

I really love Cruz’s story.  I think I, I just find her to be such as admirable, likable character. I think she finds herself, she’s very passionate about racing and she’s in this world where, she’s a little bit of a fish out of water. And, yet she really makes her mark, she finds her way and throughout this movie I love that we get to know her more, we know about where she’s coming from and what motivates her.

It was also neat to hear Brian Fee share that as a father of daughters, he felt an obligation to send the right messages to young girls with the Cruz character. And how he could relate to some of the relationships in the film based off of his own parenting and the feeling of helping his daughters accomplish things.

There are so many fantastic messages in this film, and I think that everyone will take away something different. It doesn’t matter what age you are, this movie promises to be not only action packed (I have seen the first 40 minutes, and it’s definitely action packed!) but also inspiring and through provoking as well!

CARS FANS!! Make sure to keep up with all of the excitement by getting a sneak peak at the characters we will meet in CARS 3. You can print the 2017 Cars 3 Poster here and then you can also visit the Mattel site to keep track of the 2017 Cars Diecast collection and make notations of cars that you want to collect, which ones you already own and they even subdivide them into categories based on their role in the film.

Make sure to read my other CARS 3 coverage including my lap around Sonoma Raceway and the time I competed in the Cars 3 Pit Stop Challenge! I also shared my behind the scenes tour of Pixar Animation Studios (amazing) and an exclusive interview with the writers from CARS 3 including Mike Rich (Writer), Bob Peterson (Writer), Kiel Murray (Writer), &  Scott Morse (Story Supervisor). I also shared with you my interview with the developers of the next generation of CARS 3 racers Jude Brownbill (Directing Animator), Jay Shuster (Production Designer) & Michael Comet (Characters Supervisor) along with my interview with Bobby Podesta (Supervising Animator), Michael Fong (Supervising Technical Director) and Jon Reisch (Effects Supervisor).