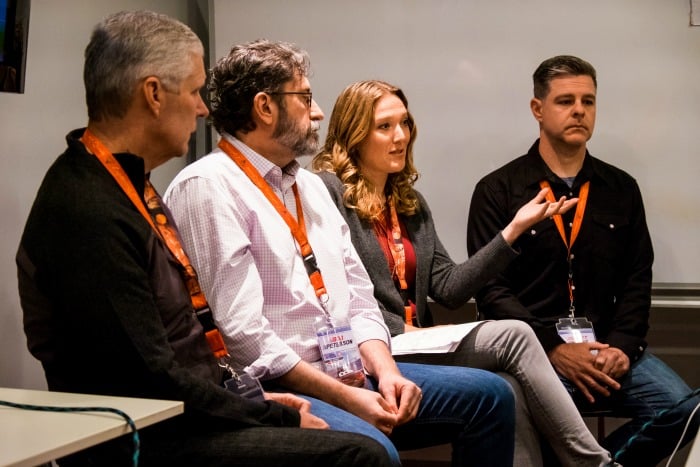 Behind the Scenes of CARS 3: Why Story is King #CARS3Event

As part of my trip to Sonoma Raceway last month, I had the amazing opportunity to interview some of the writers from CARS 3 including Mike Rich (Writer), Bob Peterson (Writer), Kiel Murray (Writer), &  Scott Morse (Story Supervisor). These folks have some pretty impressive resumes! 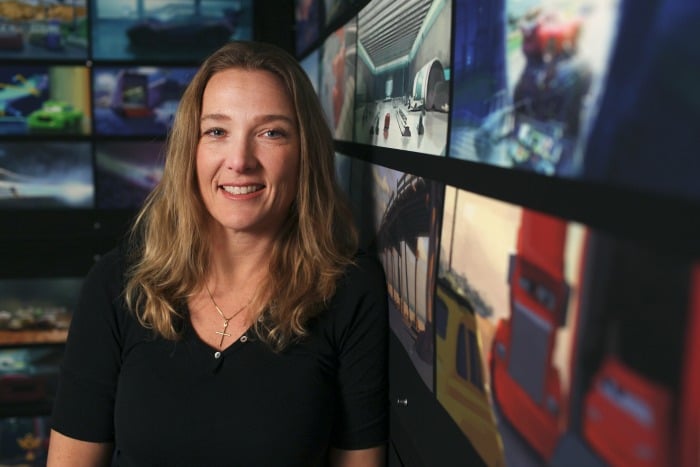 Kiel Murray has worked on projects including Brave, Up and Monsters University to name a few. She has many talents including past roles as script/story-line consultant, director, producer and production manager. 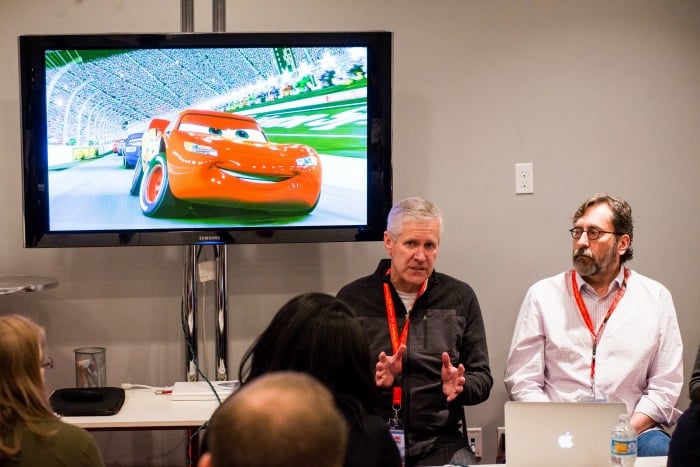 Filmmaker Bob Peterson has a crazy cool list of talents! Not only was he an animator for Toy Story, he has also voiced quite a few characters including Dug and Alpha in UP! (what!!?) That’s so cool, right? He’s actually super multi-talented, check out the awesome list of projects that Bob Peterson has been involved with here.

Mike Rich has a strong focus in sports related films so this one was right up his alley. He also happened to be a writer on Secretariat which happens to be one of my VERY favorite films, stories and actually horses. *When other teenage girls had photos of teen idols in their room, my room was plastered with photos of Big Red. No joke. But anyway, this guy is super cool, with a pretty awesome film history as well. 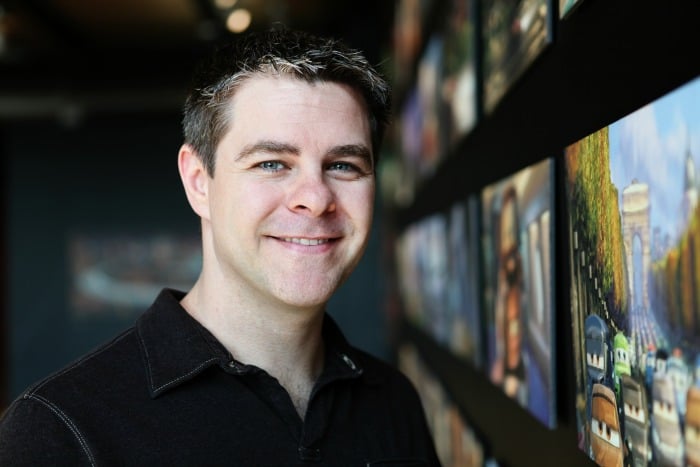 Another super multi-talented guy, Scott Morse who was the Story Supervisor,  is both an animator, filmmaker and a comicbook artist/writer. You can read more about him here, but wow… crazy talent right?

Aside from their awesome resumes, what else do these four people have in common? A HUGE passion for storytelling and for not only telling the story, but telling it with accuracy and conviction. The research for these films goes deeps and it truly shows in the final products. We saw the first 40 minutes of CARS 3 and as a longtime NASCAR fan, I’m amazed at how they work little details in. It’s no accident of course, those details come from hours and hours of research spent at the tracks, touring haulers and attending races, interviewing racers and getting up close and personal with the people that inspire the characters that we see in the movie. 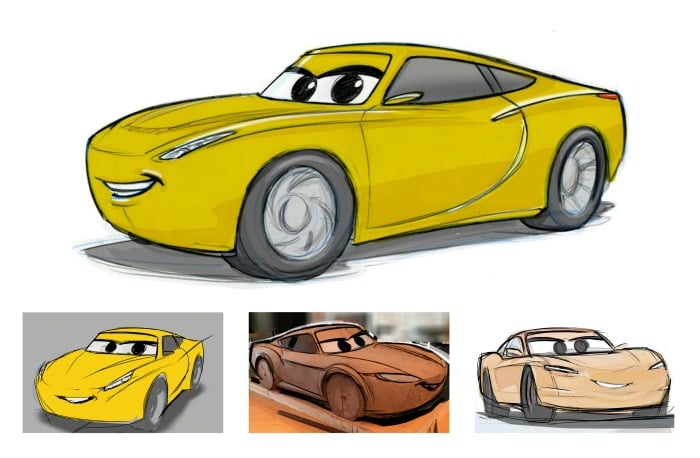 For example, one of the characters that we meet in Cars 3 is Cruz Ramirez. She’s a female racer who slowly reveals her desires to be out on the track. Kiel Murray shared with us how this was an important angle in this film, and as a mother to a daughter, something she worked hard to develop as a message to young girls. She saw a need to fit this story – the story of a female wanting to participate in a male dominated sport – into this film. Through research, they created Ramirez, who as you will see, has a pretty strong and impressive role in CARS 3. I’m so excited to see how young girls, including my daughter, respond to this character! 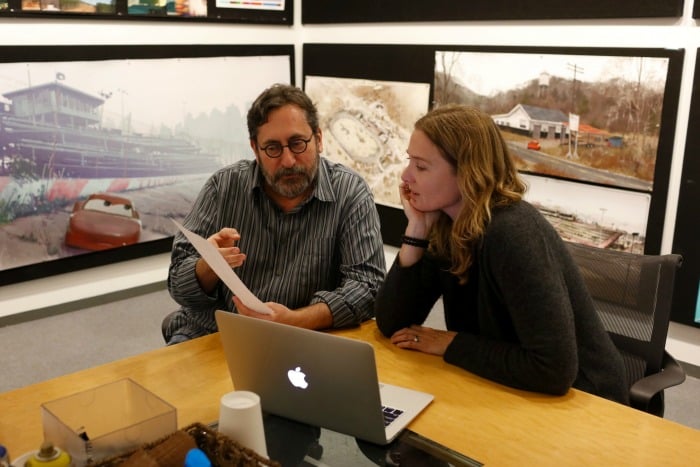 Other challenges including bringing relatable story lines into the movie. One of my favorite story lines in this film is the new character Jackson Storm. He is the new up and coming hot shot on the circuit. Until this point, Lightning McQueen has been the superstar, and in this film we deal with the harsh reality of age. And time. Something that we can all relate to, right?

To get a realistic feel for this scenario, these team members interviewed NASCAR greats including drivers like Richard Petty, Junior Johnson and Jeff Gordon. Through stories and the sharing of life experiences on and off the track, these writers were able to get a feel for how all of this might come together as a story in CARS 3. 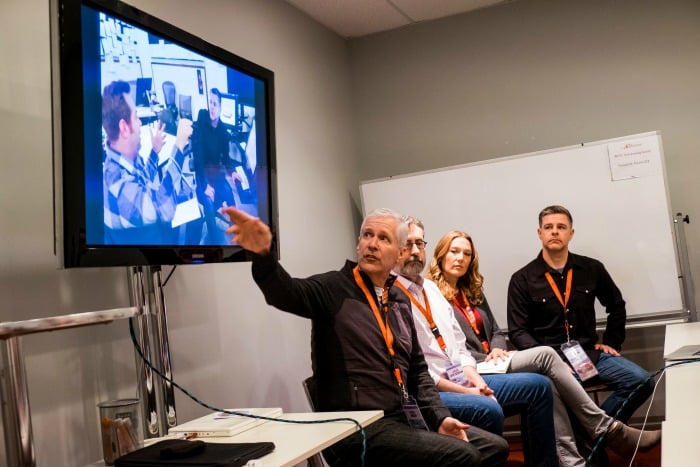 I actually remember when Jeff Gordon came onto the scene in the 9os and kind of upset the balance of racing as we knew it. Teamed up with Ray Evernham as his crew chief (see my Ray Evernham interview here!) they were unstoppable. As time passed, as it does, the sport shifted once again, and Gordon lost his lead as younger drivers came onto the scene. I asked them about that and they said it was so interesting to sit down with Jeff Gordon and hear his version of how he had lived this same story! He was both the new kid on the track as well as the retired racer moving over and making way for new racers to come in.

I actually love how this story is written around something that we can all relate to. Change. Age. And the acceptance of the passage of time and how we must all come to terms with it. Fantastic storytelling going on here folks and I love that this is a film that the whole family is going to be able to enjoy and relate to!

Make sure to mark your calendars, CARS 3 rolls into theaters next month!!