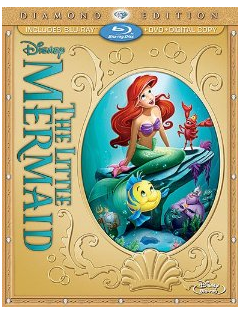 From the moment that Prince Eric’s ship emerged from the fog in the opening credits it was apparent that Disney had somehow, suddenly recaptured that “magic” that had been dormant for thirty years. In the tale of a headstrong young mermaid who yearns to “spend a day, warm on the sand,” Ariel trades her voice to Ursula, the Sea Witch (classically voiced by Pat Carroll), for a pair of legs. Ariel can only succeed if she receives true love’s kiss in a few day’s time and she needs all the help she can from a singing crab named Sebastian, a loudmouth seagull, and a flounder. The lyrics and music by Howard Ashman and Alan Menken are top form: witty and relevant, and they advance the story (go on, hum a few bars of “Under the Sea”). Mermaid put animation back on the studio’s “to do” list and was responsible for ushering Beauty and the Beast to theaters. A modern Disney classic. –Keith Simanton

With unforgettable characters, thrilling adventures, soaring Academy Award-winning music (1989: Best Music, Original Score, and Best Music, Original Song, Under The Sea.), The Little Mermaid is one of the most celebrated animated films of all time. Now spectacularly transformed for the first time on Blu-ray with digitally restored picture and brilliant high-definition sound! Venture under the sea where Ariel, a free-spirited mermaid princess, longs to be part of the human world. After bravely striking a bargain with Ursula, a sneaky sea witch, Ariel embarks on the adventure of a lifetime. With Flounder and Sebastian at her side, Ariel will need all of her courage and determination to make things right in both her worlds.

Where to purchase? Today you can purchase The Little Mermaid Diamond Edition for $34.96!  Plus, shipping is FREE with Amazon Prime or with Super Saver Shipping on orders of $25 or more!

Our thoughts? Somehow my 6 year old daughter had never seen this movie! My son had, because we had a vhs player before she was born, and by the time she was old enough to watch movies, we had gotten rid of it. I had forgotten all about it until this new release and I just got giddy about watching it with her. She was wide-eyed through the entire movie and now she can’t stop singing the songs, which I love!

Here’s a fun clip showing Ron Clements and John Musker discussing how Howard Ashman incorporated pop music into the soundtrack and the way he made the music seamlessly fit into the story:

The Giveaway: And now for the VERY best part… ONE lucky She Saved reader (US Only please and sorry) will win their own The Little Mermaid Diamond Edition Blu-Ray combo set.

… I will leave this giveaway open until Tuesday night at midnight,  October 8th (mnt time) … once closed, I will select one winner who will have 48 hours to contact me to claim their prize! GOOD LUCK!!