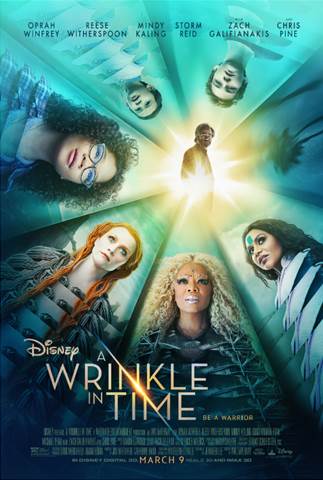 I’m headed to LA for A WRINKLE IN TIME Premiere + More!

Yay!! I’m headed back to LA for another Red Carpet event. I love these events and this one is especially exciting for me since I am an O Mag Insider and we will be interviewing Oprah Winfrey!!

Did you read this book as a kid? I did and it was one of my favorites. My children loved this book too, so we are really excited to see it come to the big screen!

From visionary director Ava DuVernay comes Disney’s “A Wrinkle in Time,” an epic adventure based on Madeleine L’Engle’s timeless classic which takes audiences across dimensions of time and space,  examining the nature of darkness versus light and, ultimately, the triumph of love. Through one girl’s transformative journey led by three celestial guides, we discover that strength comes from embracing one’s individuality and that the best way to triumph over fear is to travel by one’s own light.

Meg Murry is a typical middle school student struggling with issues of self-worth who just wants to fit in. The daughter of two world-renowned physicists, she is intelligent and uniquely gifted, as is Meg’s younger brother, Charles Wallace, but she has yet to realize it for herself. Complicating matters is the mysterious disappearance of Mr. Murry, which has left Meg devastated and her mother broken-hearted. Charles Wallace introduces Meg and her fellow classmate Calvin to three celestial beings (Mrs. Which, Mrs. Whatsit and Mrs. Who) who have journeyed to Earth to help search for their father, and together they embark on their formidable quest. Travelling via a wrinkling of time and space known as tessering, they are transported to worlds beyond their imagination where they must confront a powerful evil force. To make it back home to Earth, Meg must face the darkness within herself in order to harness the strength necessary to defeat the darkness rapidly enveloping the Universe.

Directed by Oscar® nominee Ava DuVernay from a screenplay by Oscar winner Jennifer Lee based upon the beloved novel by Madeleine L’Engle, “A Wrinkle in Time” stars: two-time Academy Award® nominee 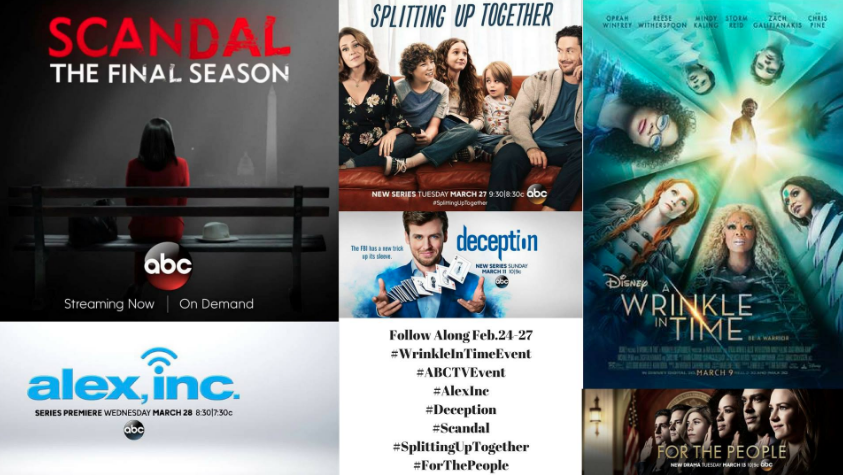 Along with cast interviews and the red carpet premiere of Disney’s A Wrinkle in Time, we’ll also be covering some fun interviews and sneak peeks at some new ABC shows, including:

I will be getting a preview of the series premiere of “For The People” followed by a Q&A and photo opportunity with stars Jasmin Savoy Brown (“Allison Adams”), Susannah Flood (“Kate Littlejohn”) and Wesam Keesh (“Jay Simmons”).

FOR THE PEOPLE (series premiere Tuesday, March 13 at 10|9c)
Set in the United States District Court for the Southern District of New York (a.k.a. “The Mother Court”), the new Shondaland series show follows six talented young lawyers working on opposite sides of the law and handling the most high-profile and high-stakes federal cases in the country.

I will also be attending a preview screening of  DECEPTION which premieres on Sunday, March 11, right after the premiere of American Idol on ABC!

We love magic, so I’m excited to see what this show is all about, it sound like a good one, doesn’t it?

Alex, Inc. premieres March 28 at 8:30 ET on ABC and it looks so fun! Featuring Zach Braff, it promises to be family friendly t.v. about a dad (Braff) who quits his job to follow his dream of starting his own company. Here’s a peek, I think this one looks really fun:

Are you a fan? This show is going into it’s 7th and final season and this season promises to be one of the most exciting yet!

As a staple in the Shonda Rhimes programming block known as “TGIT,” the Washington, D.C. drama follows a political fixer named Olivia Pope (Kerry Washington) and her team of associates who sacrifice their time, and often their morals, to “handle” unimaginable crises affecting the nation’s elite. Throughout the last six seasons, “Scandal” has used OMG storytelling to explore political culture, gender disparities, sexual politics and race in America.

The seventh and monumental final season of “Scandal” will return with a brand new White House administration that includes Mellie Grant (Bellamy Young) as the first female president of the United States, Cyrus Beane (Jeff Perry) as the vice president, and Olivia Pope as Mellie’s chief of staff. Olivia also doubles as the head of the newly reinstated top secret government agency B6-13, with Jake Ballard (Scott Foley) working by her side. Expectant mother Quinn Perkins (Katie Lowes) is now head of the newly inherited crisis management firm QPA (Quinn Perkins and Associates), with Abby Whelan (Darby Stanchfield) as her right-hand woman, and Huck (Guillermo Diaz) and Charlie (George Newbern) as her dedicated gladiators. Meanwhile, former POTUS Fitzgerald Grant III (Tony Goldwyn) is focused on maintaining his legacy by building his library and foundation with the help of Marcus Walker (Cornelius Smith Jr.). And although Rowan Pope’s (Joe Morton) role reversal with Olivia initially proves to be a struggle, he always has something up his sleeve. David Rosen (Josh Malina) remains the attorney general of the United States.

While in L.A., I’ll be screening the first THREE episodes of ABC’s new comedy, SPLITTING UP TOGETHER (premiering Tues 3/27 at 9:30|8:30c after the premiere of “Roseanne”), followed by a Q&A and photo opportunity with cast members OLIVER HUDSON (“Martin”) and LINDSAY PRICE (“Camille”) and Executive Producer/Showrunner EMILY KAPNEK (“Suburgatory,” “Selfie”).

I would love to have you follow me along on this adventure!

Also, let me know if you have any questions about Wrinkle In Time or any of these ABC shows and I will do my best to get you answers!