Last week I had the awesome opportunity to travel to LA to cover several Disney events. A trip highlight for me was a tour of Walt Disney’s home in Los Feliz on Woking Way.

From the outside, it is a very humble and yet fascinating home. Little touches, like a front door that resembles something out of Snow White, give hints that someone with a love for fairy tales once lived here.

We enjoyed a wonderful tour through  Walt Disney’s Home in Los Feliz and around the grounds that was guided by Paula Sigman Lowery, a Disney self proclaimed “Disney geek” and historian. She was a lovely woman with a clear adoration for all things Disney.

Below are some wonderful photos (courtesy of Disney) for you to enjoy, along with some tidbits of information about the Disney family and their time in this home. 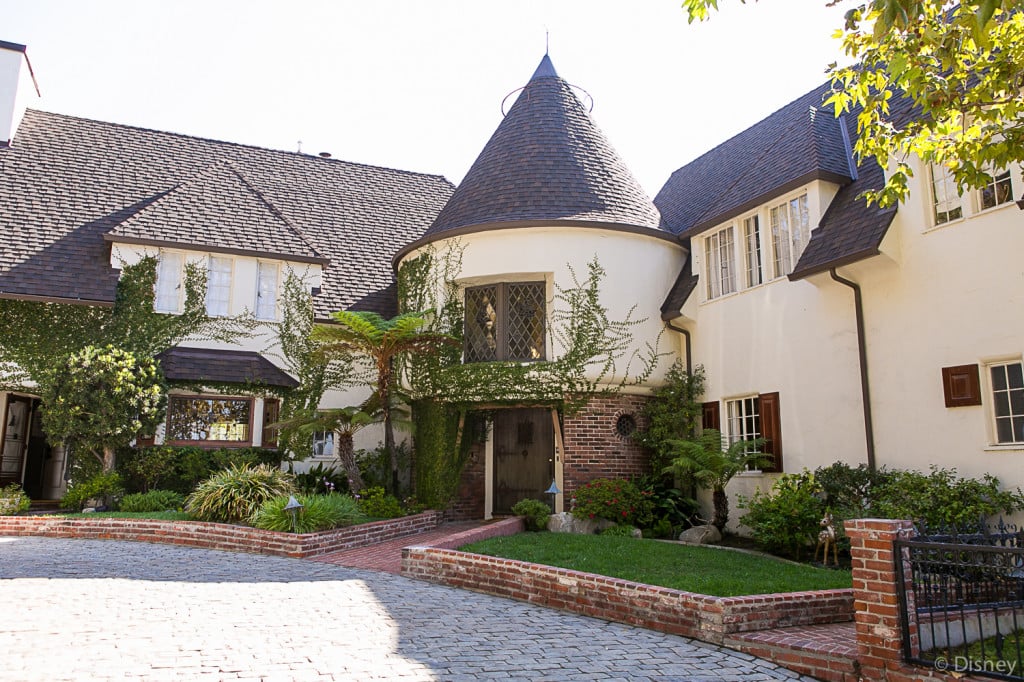 Built in the summer of 1932, the home features elements of Tudor and French Normandy architectural styles. But more importantly, it is where Walt was able to raise and spend time with his family.

“This is the house where he got to be dad”

“This house was built to be Walt Disney’s family home. This is where he and his wife Lilly raised their two daughters, Diane and Sharon. This is the house that the girls grew up in. And, this is the house where he got to be dad. It was the house from which he drove every morning to take the girls to school. He drove them to their music lessons, to their dance lessons. He took them to the opera. He and Lilly wanted to make sure that they had a normal childhood growing up. And in fact, Diane was one day at school and she came back to her dad that night and she said, “Dad, are you Walt Disney?” They had, they had a very quiet, private life.” ~Paula Sigman Lowery 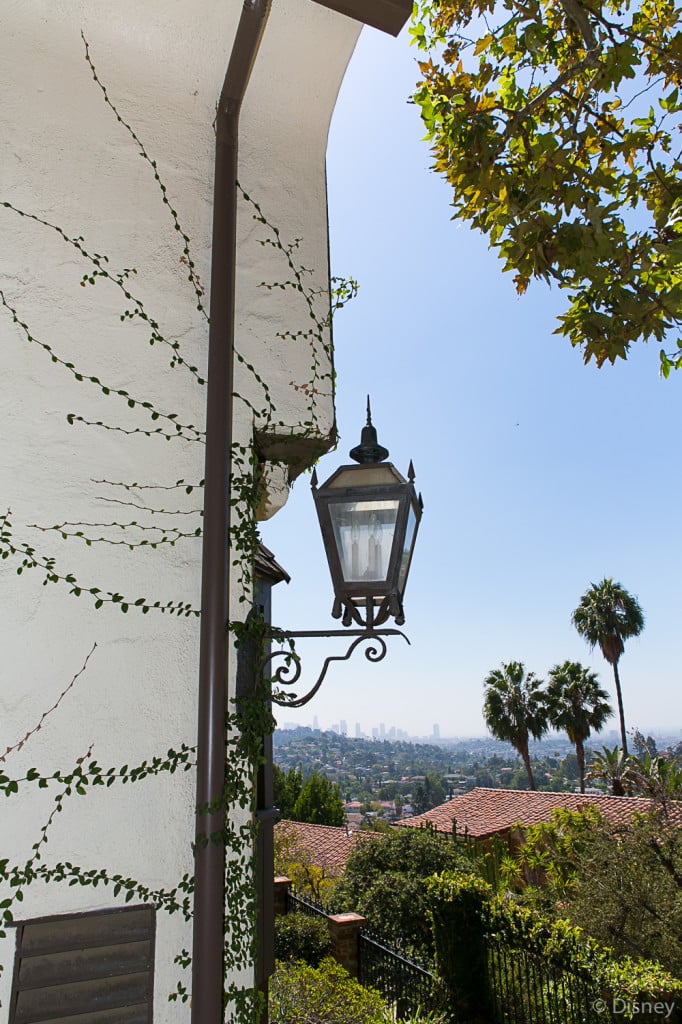 Inside the circular rotunda is a classic winding staircase made of plaster and wood. During his residency, Disney had much of the wood flooring carpeted. I love the door that is placed  Below you can see the intricately painted ceiling mural that is above the staircase. It is fascinating and was painted by a young graduate of the Vienna Academy of Fine Arts. 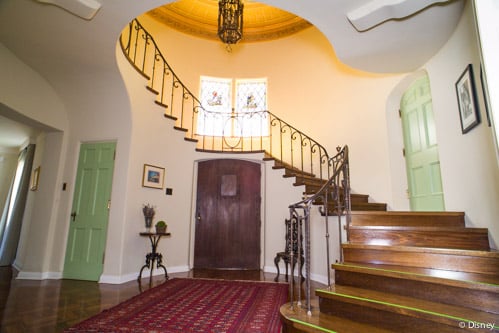 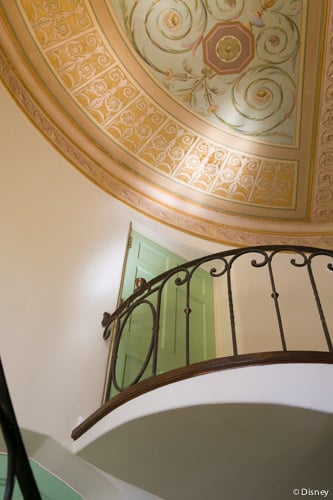 “This is what Diane, the eldest daughter, called Christmas tree point. Because on Christmas morning, the girls, who’s rooms were here and down the hall, would come running over to the little Juliette balcony and look down at the beautiful Christmas tree that was erected with all the presents around it. This is from 1940, from the Better Homes and Gardens magazine. So this, this is where they would come running”: 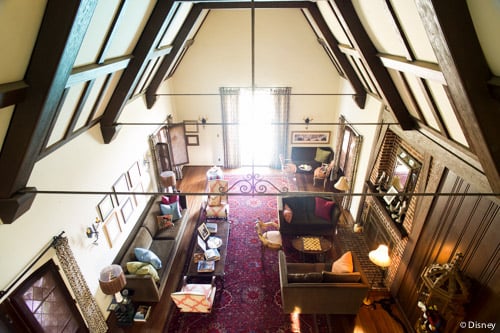 This photo of Walt and his two daughters sits atop the very fireplace in which the photo was taken so many years ago. I loved these little touches in the home and it really brought to life the love and laughter that you could imagine going on in these rooms. 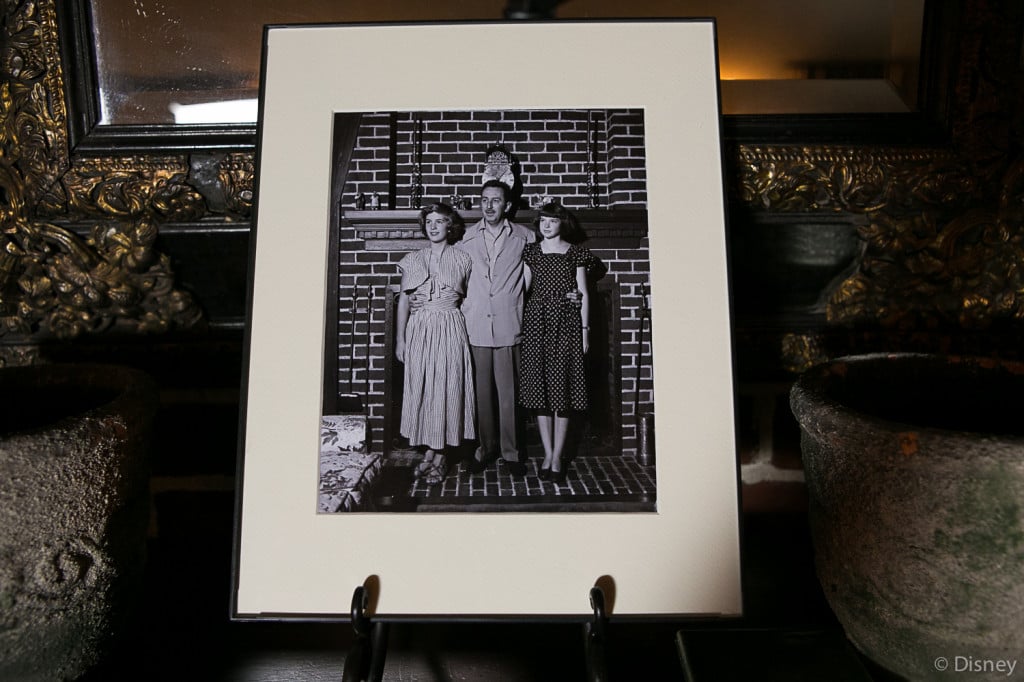 Built in the summer of 1932, Walt looked back to his own French/Norman roots and came up with a design that incorporated architectural elements from Medieval France, the Mediterranean and Tudor England, creating his own unique combination of architectural styles. The finished house has a delightful and welcoming fairy tale look, perfect for raising a family – which is exactly what he and his wife did – and which features many design elements recognizable in Sleeping Beauty.

Life at 4053 Woking Way was filled with childlike play, inspired as much by Walt’s daughters’ imaginations as by his own. According to his late daughter Diane, Walt would chase the girls around the house, cackling like the wicked witch in Snow White, or twirl them endlessly by their heels. Walt and his family lived at the Woking Way residence until May 1950, when they moved to a new home in Holmby Hills. 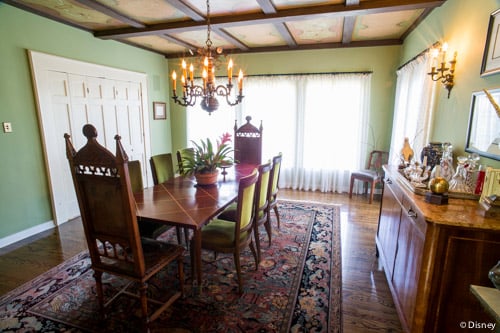 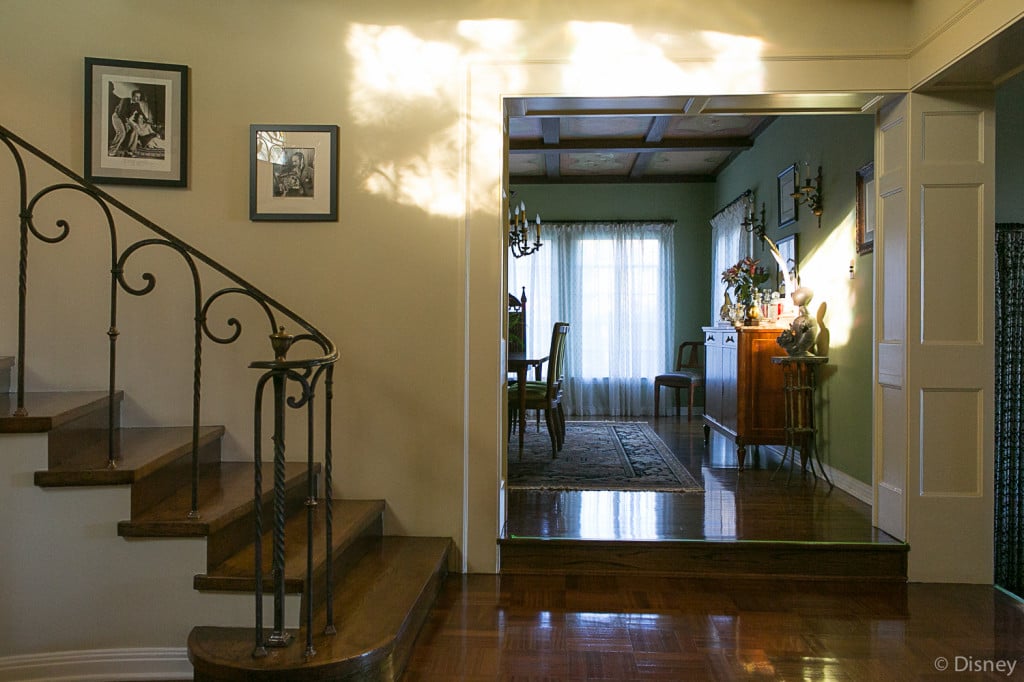 The home’s grand rounded double-story entrance features a hand-painted ceiling and a classic winding staircase perfect for a princess to make a grand entrance. As with so much of his work with animators, Walt discovered a young graduate of the Vienna Academy of Fine Arts among the Depression-era workers hired to help build the house.

Walt challenged him to paint the ceiling of the rotunda, which resulted in a spectacular flourish to the setting that is still in excellent condition. 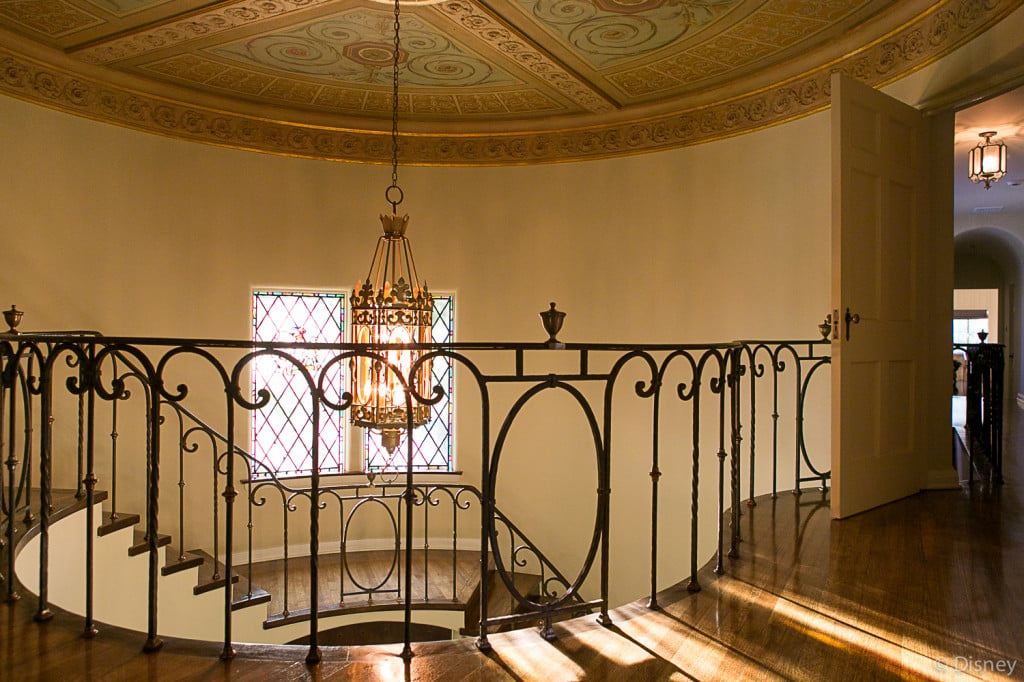 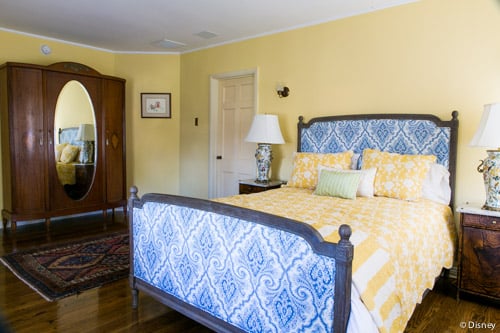 The Snow White and the Seven Dwarfs-style Playhouse

One of my favorite parts of the estate was Snow White and the Seven Dwarfs-style playhouse that was a Christmas gift from “Santa” to Diane and Sharon and was designed to match the house. It originally included a sink, kitchen, table and chairs. The original corner shelf for play dishes still exists inside. Imagine the girls on Christmas morning when they went outside to find this: 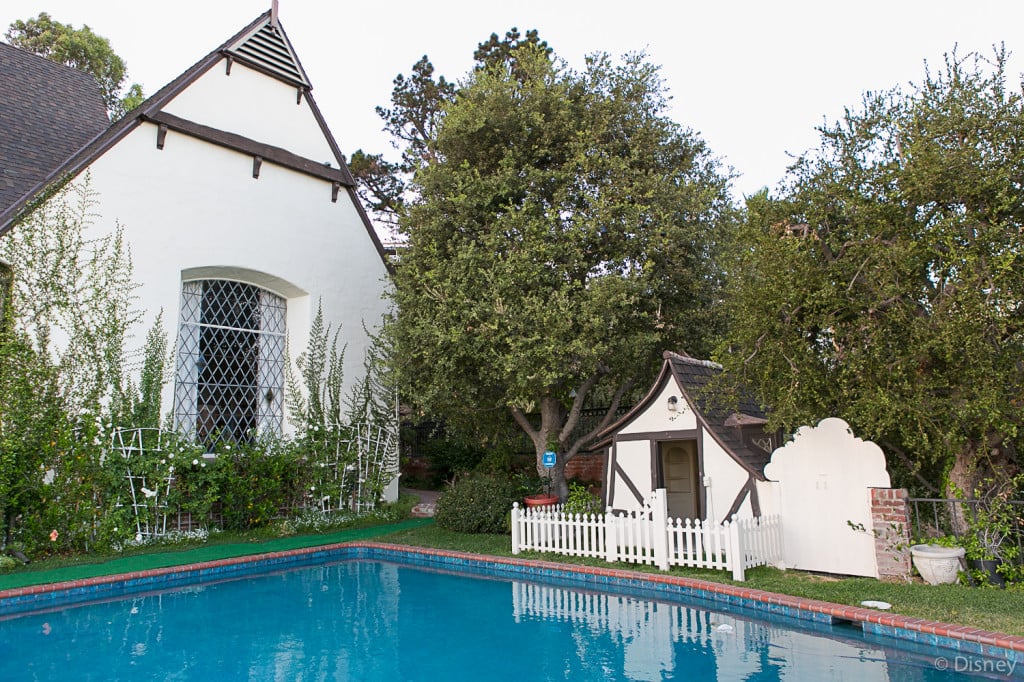 The Driveway: At the top of the brick wall-lined driveway, take in the splendor of Walt Disney’s residence at Woking Way, built in the summer of 1932, and featuring elements of Tudor and French Normandy architectural styles.

The Foyer: Inside this circular rotunda, note the classic winding staircase made of plaster and wood. During his residency, Disney had much of the wood flooring carpeted. Also, look up to see the intricately painted ceiling mural!

The Dining Room: This comfortable room features wood beam ceilings and original ceiling murals with images of sea-dragons and other fantastical, Disney-esque creatures.

The Kitchen & Maid’s Room: Originally adjacent to the dining room was a small breakfast room with kitchen at the front and a maid’s room at the back with twin beds and full bath. The maid’s room now includes a large window seat.

The Screening Room: The screening room features sliding wall panels for the projectors. Here the family gathered for private screenings of the great films of the day, including Gone with the Wind, and previewed dailies of current Disney films in production, which likely included Snow White and the Seven Dwarfs (1937), Pinocchio (1940), Fantasia (1940), Dumbo (1941) and Bambi (1942). Note the original art on the walls, including a drawing of Maleficent! Here’s a fun fact! The screening room’s stained glass windows feature images of two of history’s greatest storytellers: William Shakespeare and Charles Dickens.

The Back Terrace: Step outside and experience the panoramic hill-top vista described in a 1940 issue of “Better Homes and Gardens” as a “90-degree view” that, on a clear day, included the Pacific Ocean and Santa Catalina Island in the distance, and Pasadena, Hollywood, Los Angeles, Beverly Hills and Walt’s Hyperion Studios down below. (Peterson 13)

The Snow White Playhouse: Still intact, the Snow White and the Seven Dwarfs-style playhouse was a Christmas gift from “Santa” to Diane and Sharon and was designed to match the house. It originally included a sink, kitchen, table and chairs. The original corner shelf for play dishes still exists inside. When the playhouse was first built, it had a real working telephone installed in it – it is said that Santa called the girls on that very  phone to see how they liked the playhouse!

The Swimming Pool: The current pool is not original to the house and was built in 1963. Disney’s original pool and pool-house were built on a lower tier, which was part of the land later subdivided and sold. Both remain intact on the neighbor’s property.

The Backyard: Walt didn’t like retaining walls so he never built them around the house. He also preferred a more natural garden with native California flora and fauna.

Upstairs in the Walt Disney Home

Here are some details about the upstairs area in the Walt Disney Home in Los Feliz.

The Master Bedroom: A large, light-filled room with a dressing room and attached bath.

The View From Juliet Balcony: Look down to experience “Christmas Tree Point”!

Diane’s Bedroom: The larger of the two children’s bedrooms, with walls recently painted in vintage Sherwin-Williams colors. Diane owned a ragged Winne the Pooh doll, which she hugged every night when she went to bed.

The Bathroom Between Bedrooms: Remodeled, with a wall taken out.

Gymnasium/Sleeping Porch: Labeled a “studio” on the original plans, this room served as Walt’s exercise room and originally held his polo trophies and photos of his polo ponies. It was later converted into the girls’ playroom. Adjacent to the gym was a screened-in sleeping porch.

Walt and his family lived at the Woking Way residence until May 1950, when they moved to a new home in Holmby Hills.

Another exciting point in the evening was when we got to see the actual costumes that were worn by Angelina Jolie and Elle Fanning in Maleficent. It was amazing to be able to stand so closely to them. They are fantastic, and literally gave me goose bumps! 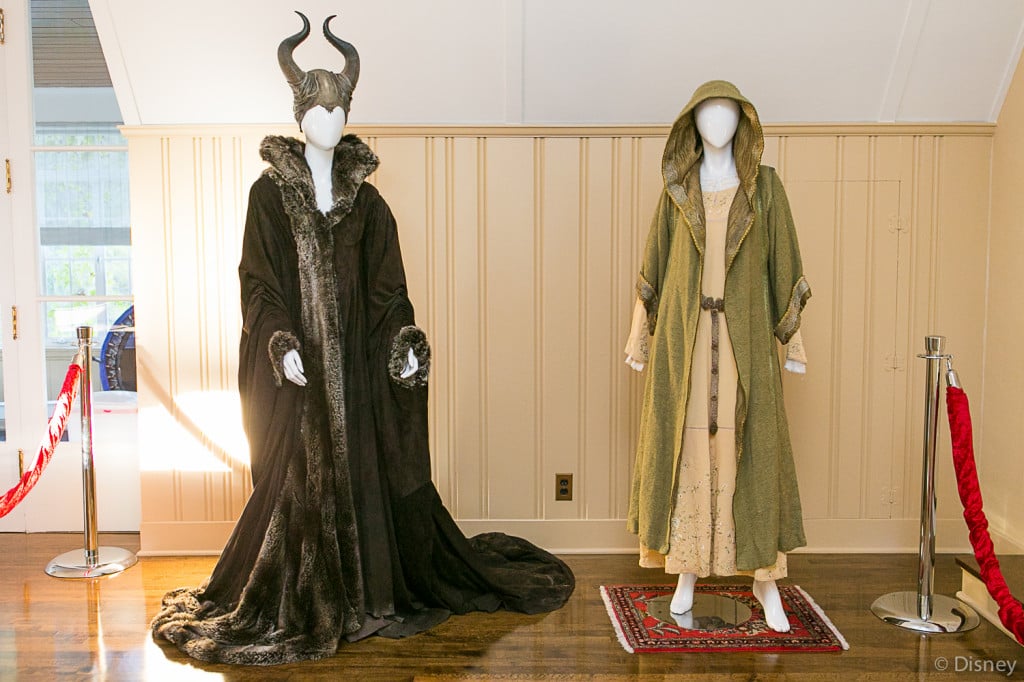 And of course, the view. One of the many spectacular features of Walt Disney’s Home in Los Feliz!

This home was so wonderful placed and has a spectacular view of Los Angeles: 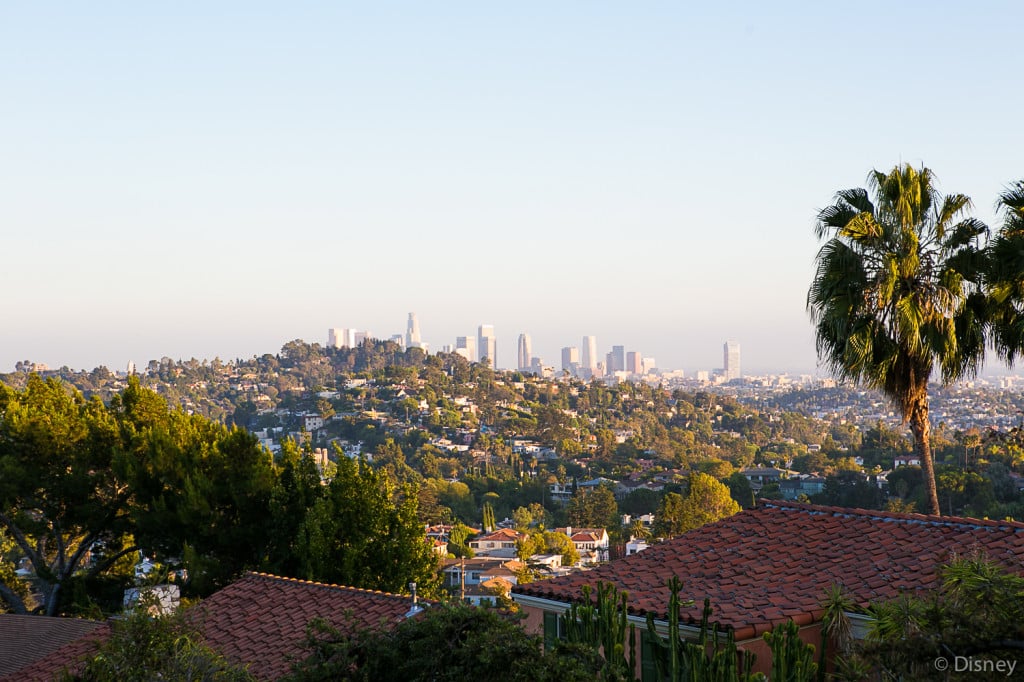 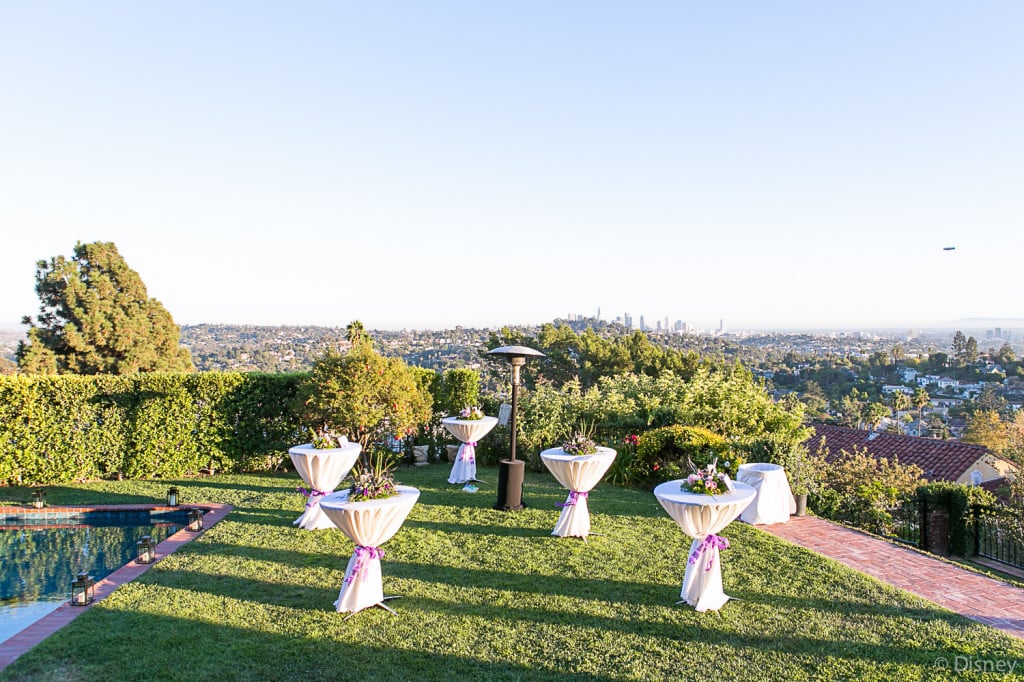 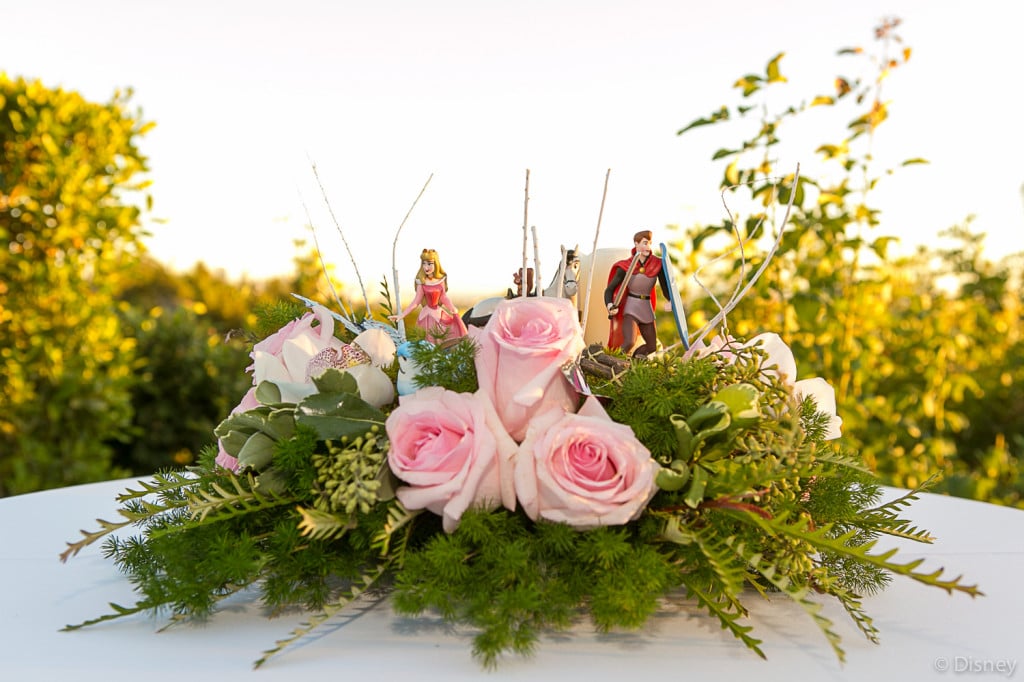 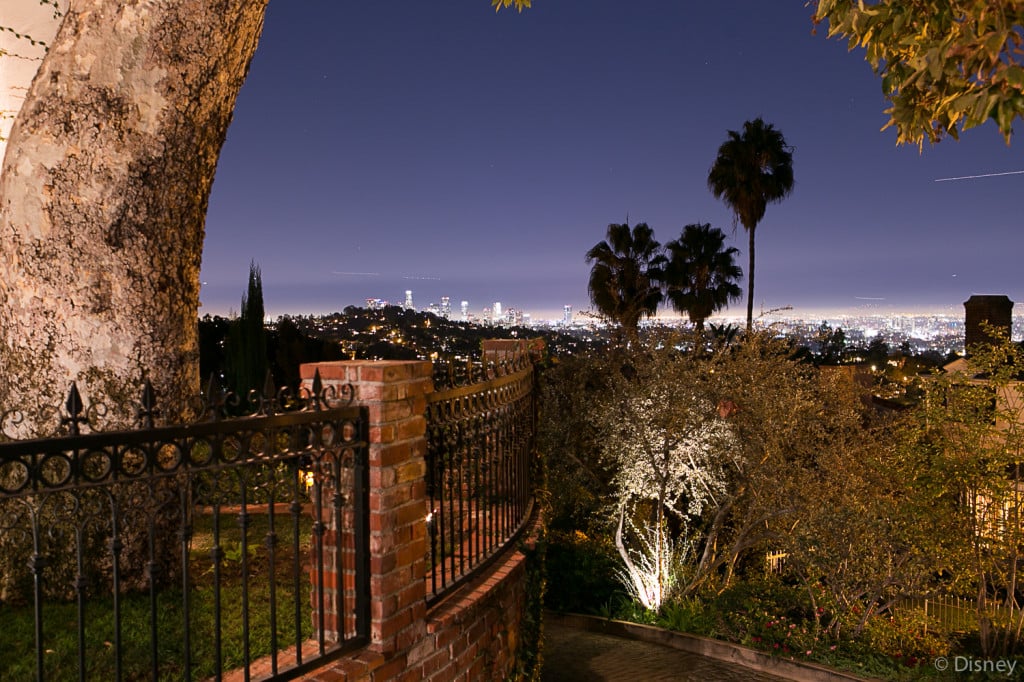 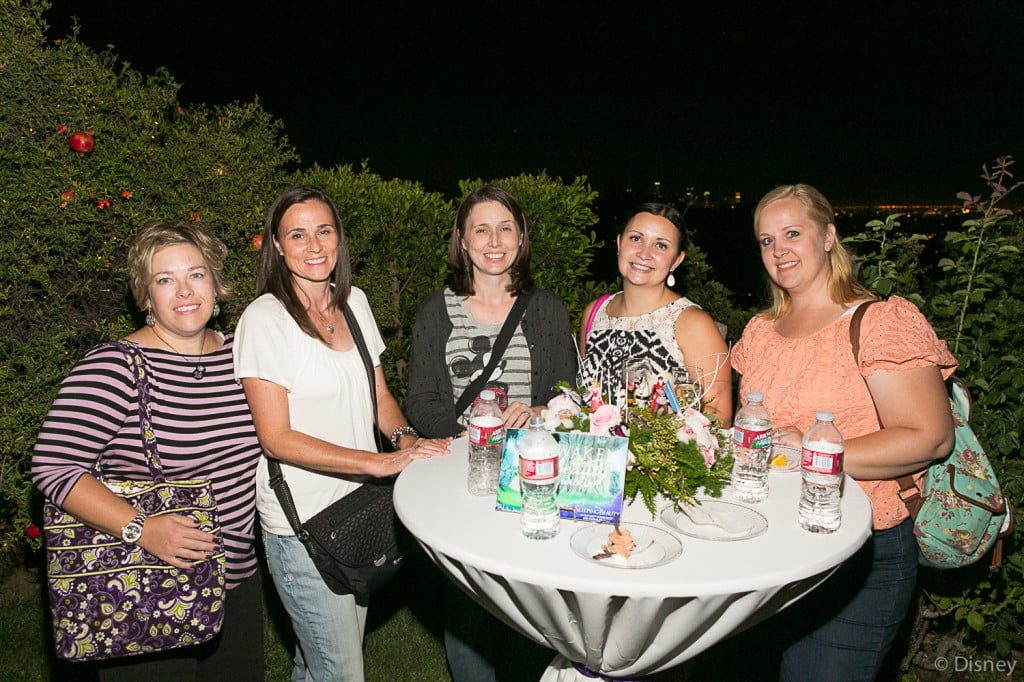 As always,  a very, very special thank you to the folks at Disney for this wonderful and once in a life time opportunity that I will NEVER forget! Make sure to read more of my Disney interviews and adventures! 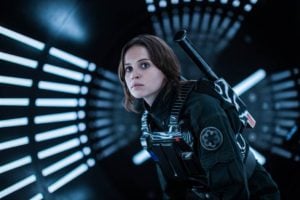 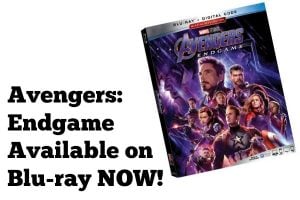 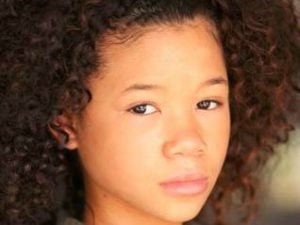