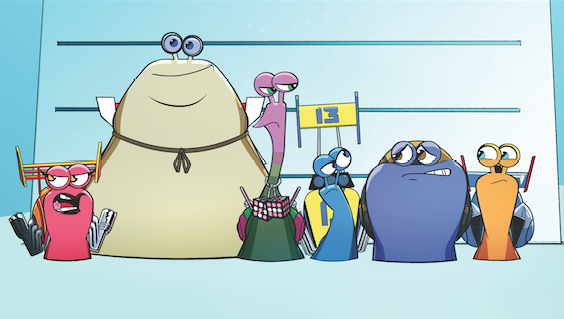 This FAST lineup looks mighty suspicious (and maybe even guilty) after Whiplash’s pumice stone is mysteriously broken in Season 3 of Turbo FAST, premiering exclusively on Netflix on Feb. 5.

Turbo fans!!
Get ready for DreamWorks Animation’s Season 3 of Turbo FAST
which will hit Netflix Friday, February 5th!
This season viewers will see parodies, including spoofs on How to Train Your Dragon, Life of Pi, 127 Hours, Neighbors and more! The new season also features voice talent from Chris Hardwick as an “Internet Troll,” Ron Perlman as “Darryl,” Rachel Macfarlane as “Thora,”  and Jessica Walter as “Aurelia.”
Here’s a peek at what happens when Turbo confronts a social media troll, voiced by Chris Hardwick.