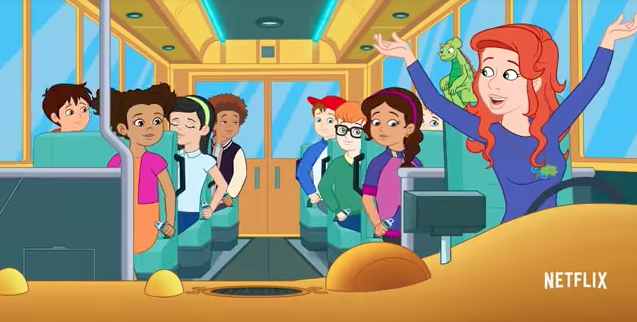 *Disclosure: I am a member of the Netflix Stream Team and I am compensated for sharing this information with you. These opinions are 100% my own and were not influenced in another person.

Anybody else remember the saying “Bus, do your stuff!” ?? I sure do, and so do my kids. We loved this show and now it’s coming back as a Nexflix exclusive!! And as if that’s not exciting enough, guess who is singing the reimagining of the classic Magic School Bus theme song? None other than Lin-Manuel Miranda!! And it all starts on September 29, 2017 when we can all jump back on board as The Magic School Bus Rides Again premieres exclusively on Netflix on September 29, 2017.

Check out the new trailer here:

The kids are back at Walkerville School for another school year of astonishing, out-of-this-world field trips in this all-new reimagining of the iconic science-comedy-adventure series The Magic School Bus. But this year, there’s a new Frizzle (Kate McKinnon)! The younger sister of the famed Professor Frizzle (Lily Tomlin) has taken over the classroom! But worry not – the new Ms Frizzle shares her sister’s zany ways and passion for science. Field trips this year are wilder than ever, into the clouds, across the internet, riding the continents – even a plunge into the depths of the Sun itself! And along the way, the kids we know and love bring their science investigations into the 21st century – still taking chances, making mistakes and getting messy!

Did you know that back in the day, Lily Tomlin won a Daytime Emmy voicing beloved teacher Ms. Frizzle in this hit animated series? It’s true. It was released in 1994 and has been popular ever since. Netflix currently hosts seasons 1-4 if you want to catch up on them before this new series starts hits Netflix on September 29th, 2017.

I think that it’s so important to have educational shows that capture both imagination and interest and this show has always been a hit with adults and kids alike. Love Magic School Bus? There are some great deals on Amazon right now: