I was so excited when I first heard that Jennifer Lee was the screenwriter on this film. I first met Jennifer years ago when I interviewed her about her work on Disney’s FROZEN, and we all know how that one turned out! Jennifer is such a talented writer and she puts so much passion into her work. Just was we saw in FROZEN, again she was writing a film about strong women making their mark in the world.

Of course, the first question that we asked Jennifer was how this project came to be and what it looks like to take such a well loved book and turn it into a movie.

Well, it took four years, if that answers the question. It was a challenge. When I heard they were looking for a writer, I was like, “Oh oh oh!” because I had loved it as a kid, and my daughter was actually reading it for 5th grade. So I was reading it again and I just kept saying, I had a whole take on it and I wanted to try it. And what I loved is, Disney really responded to that, that I wasn’t trying to do the book, adapting it for the film. It was very much clear that I don’t want to try to be the book.

If we try to be the book we’ll fail. But showing our love for the book, showing sort of how much inspiration there is in the book. And how strong the journey is in the book. If I could stay true to that, then we might have a chance of finally getting it made because it’s been years of trying. And then of course, when Ava joined, that was the final magic piece of the puzzle, I think.

This movie has some pretty strong and powerful messaging for young girls. As a mother to a teenage girl, Jennifer shared with us her hopes for her daughter.

Well, I think the biggest thing for me is that I grew up a kid who didn’t think much of herself. I had very little self esteem. And spent a lot of time criticizing myself. And a lot of time thinking I couldn’t, that I wasn’t good enough to do things. And, because I would look at others and think, this is what you have to be, is that. Or that. And all of that preoccupation with that, and all I could have been doing if I’d just gotten to go, you are fine as you are. Just focus on what you want to do and how you want to participate in the world. And I have a daughter now who is a teenager, but she has a confidence I didn’t have. She doesn’t have a blind confidence, though. She has a confidence where she could take criticism, where she can look and say, that’s not my strength but I’m inspired to do this. And I hope films like FROZEN and WRINKLE continue to help her do that. She has no problem just going for something and with no expectation of success. She just wants to be a part of it.

I hope that doesn’t change as high schoo bears down on her more and more. I think it’s saying that to participate in the world, you don’t have to be perfect. You just have to be a part of it, and be willing to try and be open. And I think of all she might be capable of doing, it won’t take her until she’s 30 to know what she wants to do … I think I’ll be a happy mom. 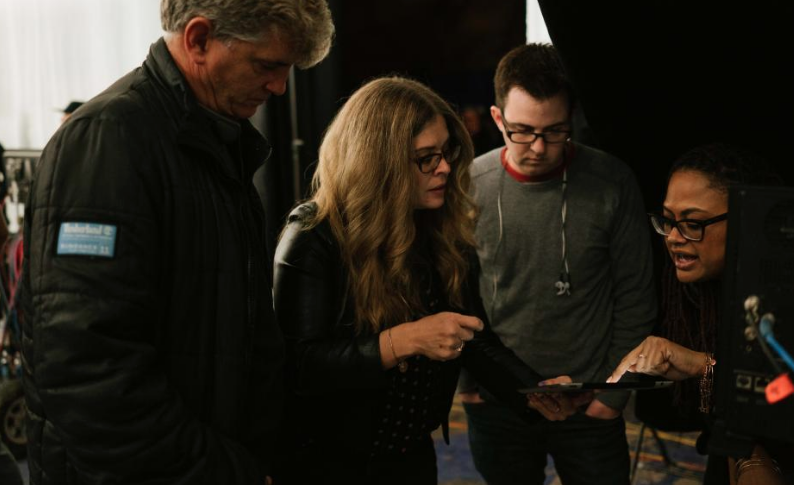 And of course, the one thing that really brings this movie together is the cast of strong women. Jennifer shared a bit about how that worked.

All of them came to this wanting to be these women. They were inspired by the book, by the script. They really came to it. So that was such a beautiful thing. And we were overwhelmed by that.

I really feel like this movie came together the way it was supposed to. She wasn’t making the book into a movie, she was making a movie to honor the book and a message that would speak to girls (and boys) in OUR time. I personally feel that they accomplished their mission and made a movie for the people that are open to and need these positive messages the most.

Wrinkle in Time is in theaters NOW!!