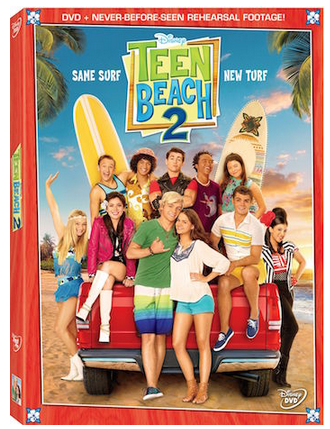 We’ve been waiting quite awhile for this since we are huge fans of the original Teen Beach movie.

Teen Beach Movie 2 was just released and can be purchased on Amazon right now! It is ALREADY an Amazon BEST SELLER!

About: Dive in and rock out with the hottest surf sequel under the sun! Now that summer ‘s over and school has begun, Brady (Ross Lynch) and Mack’s (Maia Mitchell) relationship seems headed for a wipeout – until Lela, Tanner and the “Wet Side Story” kids show up! Dazzled by the novelty and variety of the modern world, Lela wants to stay, but the real world and the “reel” world just don’t mix. Can Mack and Brady find the magic to get the kids home andget their own romance back on track before it’s too late? Packed with electrifying song & dance numbers and hilarious fish-out-of-water wackiness, Teen Beach Movie 2 2015 is “wow-abunga” fun for everyone.

Just like the original Teen Beach movie cast, you’ll find this cast talented and entertaining and they BRING it in this fun filled musical for all ages to enjoy!

Our thoughts? This movie is fun and entertaining, and my kids loved the music in this one. I love that Disney keeps things light – even though these are teenagers, it is very family friendly and just good fun. The kids in the story line are energetic and I think that my kids really enjoy the dancing and music the most. This is one that we will watch over and over again. Great summer movie!