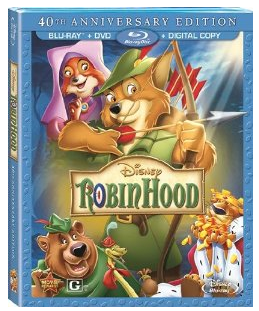 To commemorate its 40th anniversary, Disney proudly presents the unforgettable animated classic Robin Hood on Blu-ray for the first time ever. Experience all the fun, thrills and celebrated music (Academy Award® Nominated Music for Best Original Song ³Love² in 1973) of this legendary adventure with perfect picture and sound!

Join Robin Hood, his trusted companion Little John and his hilarious band of Merry Men as they outfox greedy Prince John to save the good people of Nottingham. Dashing from one daring deed to the next, Robin won¹t rest until he wins the hand of Maid Marian and restores King Richard to the throne. One of Disney¹s most beloved movies is even better on Blu-ray Combo Pack!

Where to purchase? You can purchase this special Robin Hood: 40th Anniversary Edition on Amazon right now for $24.96

My thoughts? My kids are totally fascinated by the fact that Robin Hood takes from the rich and gives to the poor, and I kind of remember being fascinated with that myself when I was a child. It’s like being bad, but in a good way. My son has probably asked me about it 50 different time, but what I love is that it promotes conversation, and I love to see how has empathy for the poor people in this film, yet is conflicted about what Robin Hood is doing. Overall though, this film is funny, exciting and of course it is one of my son’s favorites because it has a great amount of action!