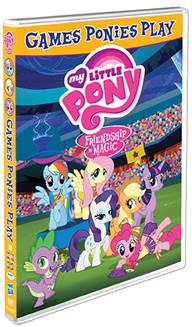 We’re all winners when we participate in the Games Ponies Play! The newest DVD release of the phenomenally popular My Little Pony – Friendship Is Magic contains 6 episodes and will arrive September 29, 2015 in the U.S. and Canada from Shout! Kids in collaboration with Hasbro Studios.

Sportsmanship is put to the ultimate test in Equestria as your favorite Ponies — Twilight Sparkle, Applejack, Pinkie Pie, Rarity, Rainbow Dash and Fluttershy — prepare for the Games Ponies Play! Included are six awesome adventures that will teach you all about overcoming the challenges of competition through the magic of friendship. Will Spike be able to build up the courage to light the ceremonial Equestria Gamestorch? Who’s the best athlete in Equestria? And will it matter, when true friendship is on the line? Find out!

Where to purchase? You are order the My Little Pony – Friendship is Magic Games Ponies Play right now on Amazon!

Our thoughts? So adorable and perfect for fall as there is a fall episode and I love that they can incorporate seasons and other timely things. As always, we loved the themes, especially how friendship helps to overcome the challenges of competition and the message that friends will be there with you as you face your fears and reach for your dreams. We love the ponies!!