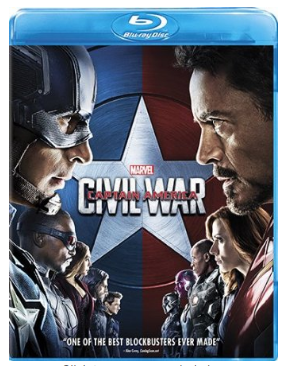 I’m not shocked at all to find out that  Marvel’s Captain America: Civil War is already an Amazon best seller! This is one of my all time favorite MARVEL movies, and if you are into MARVEL movies, then you probably agree. This film was so well done, in my opinion and the hype between the two sides was so exciting. I personally ended up being quite torn but after seeing the film, confirmed my loyalty to Team Iron Man.

Which side did YOU choose?

Team Cap, commanded by Steve Rogers (Chris Evans), or Team Iron Man, led by Tony Stark (Robert Downey Jr.). This was really hard for me, but I went into the film feeling the strongest loyalty to Team Iron Man – although I must admit, picking sides is hard, these guys are supposed to all be on the same side! Not in this film, and the reasons are intense. I feel comfortable with my decision to go Team Iron Man, but I do have to admit, the hardest (and best!) part of this film was watching them fight each other!

This is the ultimate in MARVEL films, in my opinion. Very intense action, but still has that humor and relationship interaction between characters that makes it exciting to follow and not just a fluffy fight movie.

Bonus features are always a HUGE part of the reason that we add these dvds to our collection, and this one does not disappoint! Don’t miss the 60+ minutes of in-depth bonus features that will take you behind the battle lines with your favorite Super Heroes:

United We Stand, Divided We Fall – The Making of Captain America: Civil War Part 1 & Part 2 – As the tension mounts, sides are chosen and lines drawn. Learn more about the characters on each side—from Captain America and Iron Man to the latest recruits. In this complete behind-the-scenes look at a landmark in the Marvel saga, we’ll examine their stories through exclusive footage and interviews and discover just what went into selecting the Super Hero teams, filming the epic action sequences and introducing Black Panther and Spider-Man to the MCU.

Iron Man: The Road to Civil War – From Gulmira to Sokovia, delve into the development and evolution of one of the most iconic characters in the Marvel Cinematic Universe.

Gag Reel – Break the tension of this high-stakes conflict with some hilarious outtakes featuring the lighter side of your favorite Super Heroes.

I definitely recommend adding this one to your collection! The Marvel Universe gets rocked in this epic battle of divided loyalties and it makes for some pretty amazing movie viewing!