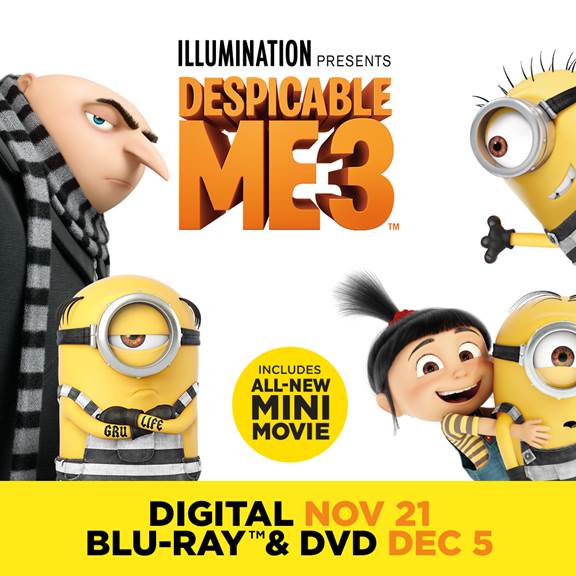 *Disclosure: This post is done in partnership with Universal Pictures Home Entertainment and I was compensated for sharing this information with you. These opinions are 100% my own and were not influenced by another person.

Are you a minions fan? If you are, I have great news!! Despicable Me 3 Special Edition is coming to Digital November 21st, and to Blu-ray & DVD December 5th! There is something fascinating about them and they are always good for a laugh.

It’s the type of movie that’s great for the entire family and a level of humor that even grabs the adults. Featuring Gru, his wife Lucy, their three adorable daughters—Margo, Edith and Agnes—and of course, the Minions, I think everyone in our family has a favorite character. Mine? I adore Agnes. Who is your favorite?

With the holidays right around the corner, this #1 animated comedy of the year, would make a gift! It includes an entire hour of exclusive bonus features including an all-new mini-movie, Minion moments, and much more! Not to mention, an incredible voice cast: Steve Carell, Kristen Wiig, Trey Parker, Miranda Cosgrove, Dana Gaier, Nev Scharrel, Steve Coogan, Jenny Slate and Julie Andrews.

Where to purchase? You can pre-order Despicable Me 3 Special Edition NOW!

Illumination, the studio that brought you Sing, The Secret Life of Pets and the Despicable Me franchise, continues the adventures of Gru and his family in Despicable Me 3. After he is fired from the Anti-Villain League for failing to take down Balthazar Bratt, the latest evil mastermind to threaten humanity, Gru finds himself in the midst of a major identity crisis. But when a mysterious stranger shows up to inform Gru that he has a long-lost twin brother — a brother who desperately wishes to follow in his twin’s despicable footsteps — the former super-villain rediscovers just how good it feels to be bad.

Have you seen Despicable Me 3? It’s so funny and the girls and Gru get themselves into some crazy situations (as usual) and I loved his scenes with Balthazar Bratt, laugh out loud hilarious.

Here’s a fun trailer to get you in a Despicable state of mind:

Despicable Me 3 Special Edition is coming to Digital November 21st, and to Blu-ray & DVD December 5th!

« Pirates of the Caribbean: Dead Men Tell No Tales Out on 4K Ultra HD and Blu-ray Today!
Hatchimals Surprise Unboxing + Watch it HATCH »