Home » Recipe » Chocolate Chip Cookies with HALF the Butter!
30 shares 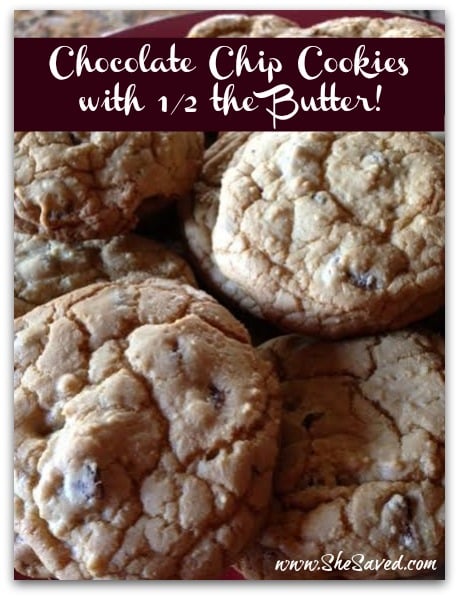 Who knew!!??
This isn’t so much of a recipe, but more of an “oops!” that actually worked in my favor. *Which doesn’t happen very often!

I made chocolate chip cookies last night using the same recipe that I always use, the one on the back of the Toll House chocolate chip bag. The recipe calls for 2 sticks of butter, however … somehow in the process of making cookies, I forgot to take the second stick of butter out of the microwave where I had placed it to soften it. I found it still sitting there this morning, which was when I realized that I had made that batch with only 1/2 of the butter. . . which made me REALLY excited because last might my hubby and kids had agreed that these cookies were the best ones that I had ever made!

I will have to say, that they were crunchier than normal, but amazing when dipped in milk. They look a little different too… but man are they good! I thought I would share this fun tidbit, as it’s a pretty exciting one. 1/2 the butter + best chocolate chip cookies ever = happy mama!!