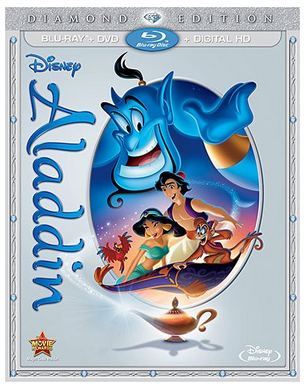 TODAY IS THE DAY!! The Aladdin Diamond Edition is available today and if you are an Aladdin fan, then you will definitely want to add this to your collection.

I think that this movie holds a special place in the hearts of Disney fans for many reasons. For one, it’s a wonderful story and so many of us remember it from years ago. Two, this film so perfectly captures Robin Williams and his personality as he so amazingly portrayed the Genie. This Diamond Edition has some amazing bonus features, specifically the The Genie Outtakes which feature outtake recordings of Robin Williams as the Genie, so much wondering and hilarious content that is just an amazing tribute to the true talent that he was. This alone makes this dvd worth adding to your collection, but there more bonus features as well, including: Unboxing Aladdin with Disney Channel’s Joey Bragg (he’s one of my very favorite Disney kids, hilarious!), Aladdin: Creating Broadway Magic (with composer Alan Menken and others), Disney Song Selection and more!

My Memories of Aladdin

Aladdin was first in theaters in 1992. I was in my last year of college and Disney movies were such a big deal. We would always try to go opening night, and I remember that afterwards, we would always listen to the soundtrack over and over again. The songs from Aladdin are what bring me back to the early 90s. I loved the song A Whole New World, and it still gives me goosebumps when I hear it. Such a magical moment and song. “A 100,000 things to see… I’m like a shooting star, I’ve come so far… I can’t go back to where I used to be…”

Enjoying these movies again with my kids creates such special memories for me, and them. I love that these movies and characters bring so much joy and will continue to do so for years to come.

About Aladdin: Climb aboard for a magical carpet ride with nonstop laughs, action-packed adventure and Academy Award(R)-winning music that will make your heart soar (1992: Best Music, Original Song, “A Whole New World,” Original Score). Now for the first time ever, a whole new world of Disney’s ALADDIN is revealed in a whole new way on Blu-ray and Digital HD — with never-before-seen bonus! With the help of a hysterically funny, shape-shifting, 10,000-year-old Genie, street-smart commoner Aladdin and clever, confident Princess Jasmine join forces against the evil sorcerer Jafar to put an end to his plans to take over the kingdom!