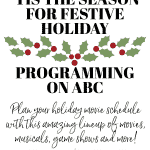 Nothing says “Tis the season” like the announcement of the holiday programming!! ABC just announced the 2022 ABC holiday programming schedule and it includes a lineup filled with merriment, beloved classics and uplifting new specials. I’m so excited to share this amazing holiday season of programming with you! 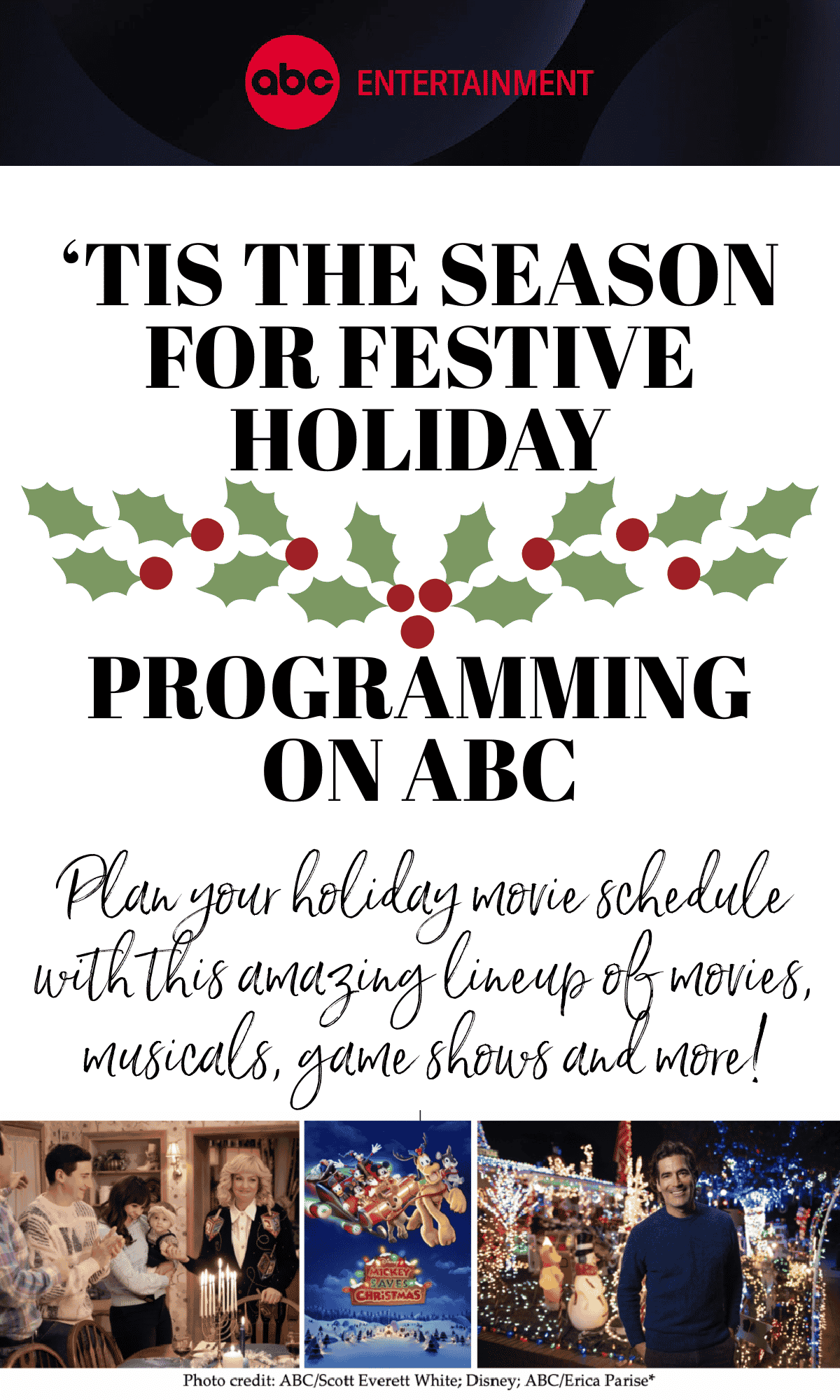 Two standout specials that include some of the biggest names in music will bring melodies in December: “A Very Backstreet Christmas” celebrates the holidays with The Backstreet Boys, and “Finding Harmony” is an uplifting story featuring EGOT winner John Legend and David Brown, founder of the Columbus-based Harmony Project in Ohio.

Disney fans will definitely want to tune in November 27th for a magical Disney lineup. Fans will also be excited to learn that Disney will kick off its 100th anniversary celebration during “Dick Clark’s New Year’s Rockin’ Eve with Ryan Seacrest 2023.” Other highlights from the ABC holiday program schedule include:

You know I love my ABC programming, so the release of the ABC Holiday programming schedule is pretty exciting!

Above are some of the highlights, but so many more additional movies, musicals and specials round out the holiday season on ABC.

Show times are as follows, listed in Eastern/Pacific time:

“The Rookie: Feds” – “Standoff” – After a father and daughter are kidnapped on Thanksgiving, the team discovers a hostage situation involving police deputies. When the gunmen offer an exchange for the hostages, Simone is sent undercover by Garza, and Lopez arrives to help rescue Wesley. Meanwhile, Laura and Brendon search for a nanny cam that could reveal the identity of the kidnapper.

The Wonderful World of Disney: “Magical Holiday Celebration” – This ABC holiday season staple returns for its seventh year with a dazzling array of all-new musical performances. The special is executive produced by Disney Parks along with Film 45 Live.

Almost a tradition now, so glad to see this as part of the 2022 ABC holiday programming!

“The Great Christmas Light Fight” – Season Premiere – Ready, set, glow. The most wonderful time of the year is here as ABC’s hit decorating competition series, “The Great Christmas Light Fight,” returns for its 10th season with back-to-back episodes across the first three weeks of the Christmas season. The next installment of the “lit” series showcases America’s brightest houses with the help of celebrity judges and Christmas décor aficionados – lifestyle expert Carter Oosterhouse and famed interior designer Taniya Nayak. In each merry and bright episode, the Christmas classic takes viewers across the country to the most elaborate and awe-inspiring holiday displays in the nation as viewers will once again see four fantastic families face off in each one-hour episode and compete to win $50,000 and the coveted Light Fight Trophy. “The Great Christmas Light Fight,” which also received a season 11 pickup, is produced by Fremantle. Brady Connell, Max Swedlow and Felicia Aaron White are executive producers for the series.

“Santa Claus Is Comin’ to Town” – In the perennial favorite created in 1970 by Rankin-Bass Productions (“Rudolph the Red-Nosed Reindeer,” “Frosty the Snowman”), Fred Astaire narrates this timeless tale of Kris Kringle (Mickey Rooney), a young boy with an immense desire to do good things for others. The vocal cast features Mickey Rooney as Kris Kringle; Keenan Wynn as Winter; Paul Frees as Burgermeister Meisterburger, Grimsby, the soldiers and the townsmen; Joan Gardner as Tanta Kringle; Robie Lester as Jessica and Andrea Sacino; Dina Lynn, Gary White and Greg Thomas as the children.

“The Great Christmas Light Fight” – The lights don’t go out yet! The week continues to get a whole lot brighter as judges Carter Oosterhouse and Taniya Nayak take viewers to the biggest and brightest holiday displays across the country. In the back-to-back episodes, the competition heats up as four festive families show off their dazzling light displays for a chance to win $50,000 and the coveted Light Fight trophy.

“Celebrity Wheel of Fortune” – “Jack Black, Kal Penn and Sasheer Zamata” – This special holiday episode of “Celebrity Wheel of Fortune,” hosted by pop-culture legends Pat Sajak and Vanna White, takes a star-studded spin on America’s Game® by welcoming celebrities to spin the world’s most famous Wheel and solve puzzles for a chance to win more than $1 million. All of the money won by the celebrity contestants will go to a charity of their choice. This episode’s celebrity contestants include Jack Black (playing for 24th Street Theatre), Kal Penn (playing for Myrtle Avenue Revitalization Project) and Sasheer Zamata (playing for SELAH Neighborhood Homeless Coalition).

A can’t miss part of the 2022 ABC holiday programming schedule, make sure to mark your calendars for this one!

The Wonderful World of Disney: “Frozen II” – Why was Elsa born with magical powers? What truths about the past await Elsa as she ventures into the unknown to the enchanted forests and dark seas beyond Arendelle? The answers are calling her but also threatening her kingdom. Together with Anna, Kristoff, Olaf and Sven, she’ll face a dangerous but remarkable journey. In “Frozen,” Elsa feared her powers were too much for the world. In “Frozen 2,” she must hope they are enough. (8:00-10:01 p.m.)

“Disney Prep & Landing” – Walt Disney Animation Studios brings you a half-hour holiday special tale of an elite unit of elves known as Prep & Landing. After working tirelessly on Prep & Landing for 227 years, an elf named Wayne is upset when he doesn’t receive an expected promotion to be the Director of Naughty List Intelligence. Instead, Magee, the North Pole Christmas Eve Command Center Coordinator (NPCECCC for short), partners Wayne with Lanny, an idealistic rookie who has an undying enthusiasm for Christmas. During their Christmas Eve mission, Wayne and Lanny encounter unexpected challenges that push them to their limits. Will the elves be able to guide Dasher, Dancer and the rest of the reindeer pulling Santa’s sleigh through a raging snowstorm to ensure a merry Christmas for all?

“Disney Prep & Landing 2: Naughty vs. Nice” – The yuletide adventures of Christmas elves Lanny and Wayne continue. With the Big 2-5 fast approaching, Wayne and Lanny must race to recover classified North Pole technology that has fallen into the hands of a computer-hacking Naughty Kid! Desperate to prevent Christmas from descending into chaos, Wayne seeks out the foremost Naughty Kid expert to aid in the mission, a bombastic member of the Coal Elf Brigade who also happens to be his estranged brother, Noel.

Probably my personal favorite movie in the 2022 ABC holiday programming lineup, this is a must watch for families!

“Toy Story That Time Forgot” – Pixar Animation Studios’ special for television “Toy Story That Time Forgot” features everyone’s favorite characters from the “Toy Story” films. During a post-Christmas play date, the “Toy Story” gang finds themselves in uncharted territory when the coolest set of action figures ever turns out to be dangerously delusional. It’s all up to Trixie the triceratops if the gang hopes to return to Bonnie’s room in this “Toy Story That Time Forgot.” The cast includes Tom Hanks as Woody, Tim Allen as Buzz, Kristen Schaal as Trixie, Kevin McKidd as Reptillus Maximus, Wallace Shawn as Rex, Timothy Dalton as Mr. Pricklepants, Don Rickles as Mr. Potato Head and Joan Cusack as Jessie. You can also find this movie (one of our favorites!) on Amazon here.

The Wonderful World of Disney: “Home Alone” – Eight-year-old Kevin McCallister has become the man of the house, overnight! Accidentally left behind when his family rushes off on a Christmas vacation, Kevin gets busy decorating the house for the holidays. But he’s not decking the halls with tinsel and holly. Two bumbling burglars are trying to break in, and Kevin’s rigging a bewildering battery of booby traps to welcome them!

“The Year: 2022” – “The Year: 2022” is anchored by Robin Roberts and featuring many of ABC’s top news anchors, including David Muir, Michael Strahan, George Stephanopoulos, Juju Chang, Linsey Davis, Janai Norman and Ginger Zee. For the 12th consecutive year, ABC News presents its popular news- and entertainment-filled two-hour year-end network special, “The Year,” retracing the top stories, trends and entertainment obsessions we couldn’t get enough of in 2022.

Such a great way to send off the old year, and bring in the new! The final piece of the 2022 ABC holiday programming schedule is everyone’s favorite traditional part of New Year’s Eve!!

“Dick Clark New Year’s Rockin’ Eve with Ryan Seacrest 2023” – ABC’s Dick Clark’s New Year’s Rockin’ Eve with Ryan Seacrest is the preeminent destination for viewers to ring in the New Year. Hosted by Ryan Seacrest live from Times Square, the show celebrates the year’s very best in music featuring a night superstar performances. The nation’s most-watched New Year’s Eve celebration, which gives viewers a look at New Year’s celebrations from around the globe, will wrap up the holiday season and kick off Disney’s 100 Years of Wonder celebration. Details around co-hosts, performers in Times Square and additional locations will be announced closer to show night.

Make sure to check out our favorite Disney movies

« Disneyland Ticket Sale (Save up to $90 Per Ticket!)
Easy White Fudge with Cranberries Recipe »