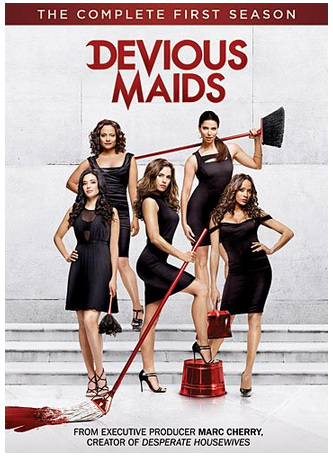 Oh my! Talk about scandal! Nothing boring in this series!!

About: Sex. Lies. Murder.It’s all in a day’s work. From Executive Producer Marc Cherry, creator of Desperate Housewives, comes Devious Maids: The Complete First Season. Meet five women bonded together by their jobs, their dreams and the dirt they sweep under the rug: Aspiring singer Carmen; Rosie, who longs to be reunited with the child she left back in Mexico; Marisol, whose outward identity masks a desperate hidden agenda; and Zoila and her daughter Valentina – both employed by the delightfully unhinged Genevieve Delatour (Susan Lucci). Before the season is over, illicit affairs will be revealed and depraved secrets exposed, as we learn the sordid details behind a shocking murder. Start your collection with all 13 addictive episodes plus “sin-tillating” bonus features, and relive the intrigue as murder, mystery and mayhem collide amongst the mansions of Beverly Hills!

Where to purchase:  You can purchase Devious Maids: Complete First Season on DVD on Amazon for $29.60!

My thoughts? Wowza! I was never a fan of Desperate Housewives, so I was really hoping that this would not be too much like that and thankfully, it wasn’t. This series has jaw dropping twists, but also (at least I thought!) a lot of humor! It’s a bit cheesy sometimes, but that is kind of what made it interesting, and hilarious. I really like the mix of cast characters, and their personalities are fun and entertaining. It is definitely for grown ups (definitely!) and you get a LOT of bang for your buck with this DVD as it contains 13 episodes and some fun bonus features!