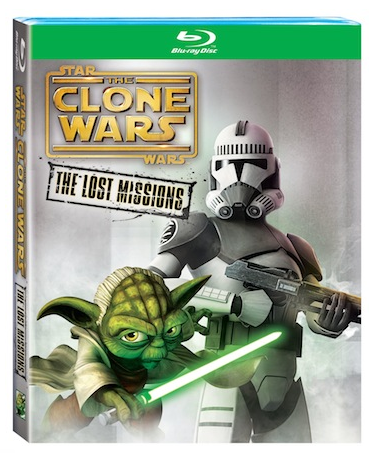 From Executive Producer George Lucas comes the Emmy® Award-Winning Series ‘Star Wars: The Clone Wars.’ We have STAR WARS: THE CLONE WARS: THE LOST MISSIONS blasting onto Blu-ray and DVD November 11th! There is also a never before seen 16-minute documentary within the bonus feature!

About: Against a backdrop of ever-shifting loyalties, uneasy alliances and ancient hostilities, the conflict between the Republic and the Separatists ramps up, setting the stage for Darth Sidious’ ultimate act of treachery against the Jedi. In these uncertain times, some of the deepest mysteries of the light and dark sides of the Force are revealed as an intrepid clone trooper uncovers a shocking conspiracy, Anakin Skywalker’s closest relationship is tested to its limits, and Master Yoda makes a discovery that could forever change the balance of power in the galaxy. Complete your collection and experience all the wonder, intrigue, action and suspense of THE LOST MISSIONS in 13 must-own episodes — plus a Behind-The-Scenes Documentary — as this thrilling chapter of the STAR WARS saga comes home on DVD for the first time!

Where to purchase? You can pre-order STAR WARS: THE CLONE WARS: THE LOST MISSIONS right now on Amazon and they will ship it right out! The official release date is tomorrow!

Our thoughts: I can’t believe how hooked we are on Star Wars (again!) … just when I think that our fascination has died out a bit, then there is a new release and my kids go nuts. I really like these episodes because they are so awesome for kids and adults, very fun to follow the story line and somehow they manage to make these exciting and full of adventure while staying true to the Star Wars empire. Also: The bonus features on this series are AWESOME, so make sure to make a point to watch those, so great behind the scenes footage and even some lost episodes!

GREAT gift idea, this is. (I say in my best Yoda voice.)