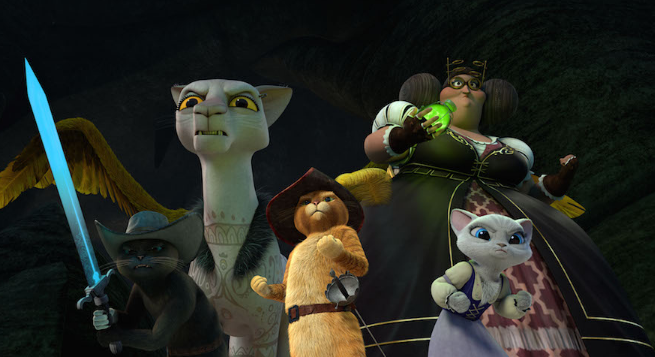 This July Netflix is bring us a new season of one of our favorites! THE ADVENTURES OF PUSS IN BOOTS: Season 3 will air on July 15th on Netflix.

The world’s most legendary sword fighter, Puss in Boots, swings into action with more of your favorite fun-filled magical adventures in the all-new Season 3 of THE ADVENTURES OF PUSS IN BOOTS!

Season 3 picks up where the epic cliffhanger from last season left off:  Puss must go toe-to-toe against the evil Bloodwolf. When Puss realizes he can’t do it alone, he forms the Senior Defense Squad and joins a rowdy band of Sky Pirates to help the fight against the Bloodwolf.

Puss comes face-to-face with his ex-girl-fish-monster FeeJee and the Emperor of the Merpeople, takes control of the flying pirate ship when he is crowned Captain, and leads an army of skeletons back to San Lorenzo. Artephius creates a twin for Puss, Kid Pickles becomes King of San Lorenzo for his birthday and so much more!

My kids have always enjoyed Puss in Boots, his personality is so much fun, a bit snarky but always a hero and the story lines are adventurous enough to keep my kids interested but also good clean fun so I don’t need to worry about anything inappropriate.

It’s all exclusively on Netflix July 15th…so mark your calendar!

« Future-Worm Coming to Disney XD on August 1st!
Penelope Wilton and Rebecca Hall on their Roles in The BFG »