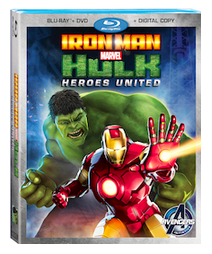 In this action-packed adventure, the invincible Iron Man and the incredible Hulk come together to save the Earth from its greatest threat yet! When two HYDRA scientists try to supercharge a Stark Arc Reactor with Hulk’s Gamma Energy, they unleash a being of pure electricity called the Zzzax – and he’s hungry for destruction. Together, Iron Man and Hulk are the only force that stands in the way of the Zzzax’s planetary blackout. But first the Super Hero duo will have to get through snarling Wendigos, deadly robots and the scaly powerhouse, Abomination. Can two of Marvel’s mightiest Heroes find a way to work together without smashing each other before time runs out?

Where to purchase: You can purchase Marvel’s Iron Man & Hulk: Heroes United DVD on Amazon right now for $29.06!

Our thoughts: As a mama what I love about this dvd is that it is PG. My son so badly wants to watch the “real” Marvel guys but this mama still says now. This one is right up his alley though, he can barely stand all of the excitement and the cheesy (yes cheesy) action character banter. It cracks me up but he LOVES it and he just can’t even stay in his seat. If you have a little one who loves super heroes, this might be a good fit!