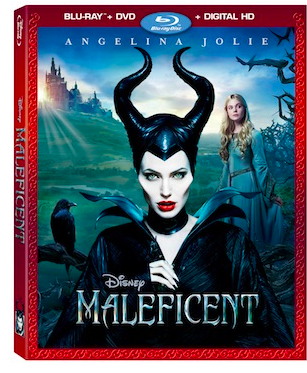 Maleficent will hit the shelves on Blu-ray on November 4th, 2014. You can pre-order the MALEFICENT  DVD on Amazon right now for $19.94.

I can honestly say that this film is in my top 10 of all times, possibly top 5. I adore this movie and it is one that I can watch over and over again.

*Deleted Scenes: It is fun to get a peek at things that didn’t make the final film. I can’t imagine this movie any other way, so I loved seeing these parts that “might have been”.

*Aurora Becoming A Beauty: This is a darling feature with Elle Fanning revealing her life long love of the original classic, Sleeping Beauty.

*From Fairy Tale to Feature Film: This short talks about the journey that it took to bring Maleficent to where it is today.

*Building an Epic Battle: The making of the awesome fight scene between King Henry’s army and Maleficent. This is probably my FAVORITE of the bonus features, so awesome to see how this incredible fight scene was made!

I actually had the opportunity to interview MALEFICENT Director Robert Stromber last spring and I was fascinated listening to him share with us the creation of these battle scenes. Here is one of my favorite clips about the making of the Maleficent, where you will see Robert talk about shooting a large (and amazing) battle scene:

*Classic Couture: A closer look at the intricate and detailed costume design that went into Maleficent’s attire.

*Maleficent Revealed: This is a fascinating look at all of the special effects that they used in this film. I love these educational pieces because they really make you appreciate everything that goes into the movie that you see on screen.

As if MALEFICENT isn’t amazing enough, I promise you … these bonus clips make it even better!!

Remember, MALEFICENT is rated PG and will be available on Blu-ray and DVD on Novemeber 4th, 2014! You can pre-order the MALEFICENT DVD on Amazon right now for $19.94.