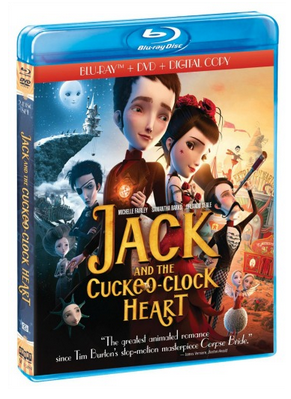 Jack and the Cuckoo-Clock Heart was released this month and it’s definitely a unique and fun twist on your typical animated movie!

JACK AND THE CUCKOO-CLOCK HEART is set in the late 19th century Edinburgh, where little Jack is born on a day so cold that his heart remains frozen. Madeleine the midwife saves his life by inserting a cuckoo clock in place of his defective heart. It will work, she warns him, as long as Jack observes three golden rules. First of all, he must never touch the hands of the clock. Secondly, he must control his anger. And last, but certainly not least, he must never, ever fall in love. The moment Jack sets eyes on a young girl singing on a street corner, the hands of his clock-heart begin to race. Desperate to find her again, Jack launches himself into a romantic quest that will lead him from the lochs of Scotland, to the city of Paris and all the way to Andalusia.

Where to purchase? Jack and The CuckooClock Heart on Blu Ray for $22.47

Our thoughts: This is a cute film, and very unique. It is rated PG, so a step up maybe for the younger kids but it was a nice fit for my kids 7 & 9. This movie is not perfect, but it is full of imagination and has a very unique (I can’t stop using that word) twist to it that my kids really were fascinated by. The animation is gorgeous and overall I found it to be a charming little film!