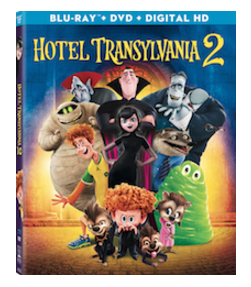 Where to purchase? You can purchase Hotel Transylvania 2 DVD right now on Amazon!

In this all-new monster comedy adventure, everything seems to be changing for the better at Hotel Transylvania! However, Drac is worried that his adorable half-human, half-vampire grandson, Dennis, isn’t showing signs of being a vampire. So while Mavis is on vacation, things get batty as Drac enlists his monster friends Frank, Murray, Wayne and Griffin to put Dennis through a “monster-in-training” boot camp!

All DVD Bonus Features Plus…

Our thoughts? This movie is darling…full of fun characters and we loved the humor. This movie follows little baby Dennis (Drac’s first grandchild) as he grows up among the monsters and everyone is trying to determine if he is a vampire or not. Hilarious adventures take place as monsters and humans start to co-exist since Drac has opened the hotel to humans. My kids think this movie is hilarious and I enjoy watching it with them because the humor is refreshing and honestly, it’s really funny. Every family has it’s troubles (freaks and monsters, if you will!?) and this movie sweetly points out that these are the things that make families special. This is one that we will watch over and over again.