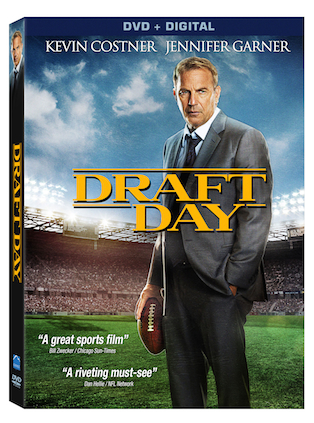 It’s NFL Draft Day. A day that can change the lives of athletes and the fortunes of football teams forever. After pulling off a blockbuster trade, General Manager Sonny Weaver Jr. (Costner) controls the #1 pick. Up against fan pressure, an ambitious owner (Langella) and a hard-nosed coach (Leary), Sonny faces the biggest decision of his life. Should he go with the consensus #1 pick or trust his instincts and risk losing it all?

Where to purchase? You can purchase Draft Day on Amazon right now for $14.96.

Our thoughts: We love sports around here, especially football, so even I was excited to see this film. It gives great insight into what goes on behind the scenes in football, and I think that even if you are not a football fan, you would enjoy the relationships that occur in this film. I always find Costner fascinating, so I enjoyed him in this film and I thought that he brought a lot of depth to his character. Of course, Jennifer Garner is amazing as well, and she did a great job in this film, very believable and very passionate. I would recommend this film and definitely think that it is a great gift idea for any football fan, especially with the holidays right around the corner!

« Build Your Own Reversible Blocks For $9.99
Disney’s INTO THE WOODS Hits Theaters on December 25th! »