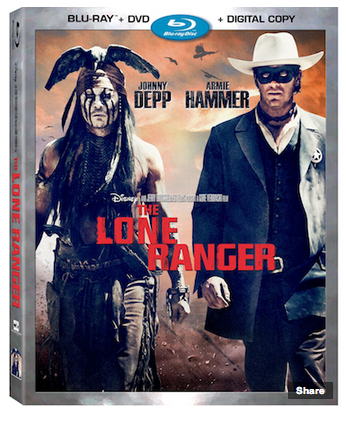 Disclosure: I did receive a copy of this movie to facilitate my review, all opinions are my own and were not influenced by another person. (except Armie Hammer, I kind of was a bit influenced by his awesomeness 😉 )

Johnny Depp and Armie Hammer star in The Lone Ranger, from Jerry Bruckheimer Films and Director Gore Verbinski. It’s a wild ride of high velocity action, explosions and gunfights that brings the famed masked legend to life through brand-new eyes. The LoneRanger (Hammer), the last of his kind, teams with Tonto (Depp), a dark and mysterious vigilante, to seek vengeance after justice has failed them. It’s a runaway train of epic surprises, as these two unlikely heroes must learn to work together before the ultimate showdown between good and evil explodes.

My thoughts? I grew up watching (and loving) the Lone Ranger. Actually, I loved his horse… a lot. I watched the movies and played with the dolls. I thought he was just about the coolest thing ever. My first reaction to the fact that Disney was making this movie was excitement, and then I actually had a bit of concern, as I was really worried that they would take away from the original Lone Ranger, by changing him too much or taking him too far from his black and white, non-violent, sweet masked man self.  After accepting a more modern version, I was pleasantly surprised. This movie is funny and light, full of action and the I really enjoyed the score. I have read so many crazy reviews on this film but for me, it was enjoyable and entertaining, and I loved the cast of characters. My kids have NOT yet seen this movie and although I am sure my son would love it, he’s still happy with the old Lone Ranger movies (yes, we still watch them all the time, lol!).

Where to purchase: You can purchase The Lone Ranger (Blu-ray + DVD + Digital Copy) on Amazon right now for $21.96!

The Giveaway: And now for the VERY best part… ONE lucky She Saved reader (US Only please and sorry) will win their very own The Lone Ranger (Blu-ray + DVD + Digital Copy)!

… I will leave this giveaway open until Tuesday night at midnight, December 31st (mnt time) … once closed, I will select one winner who will have 48 hours to contact me to claim their prize! GOOD LUCK!!

*Disclosure: I did receive this product for review, these opinions are my own and were in no way influenced by another person.