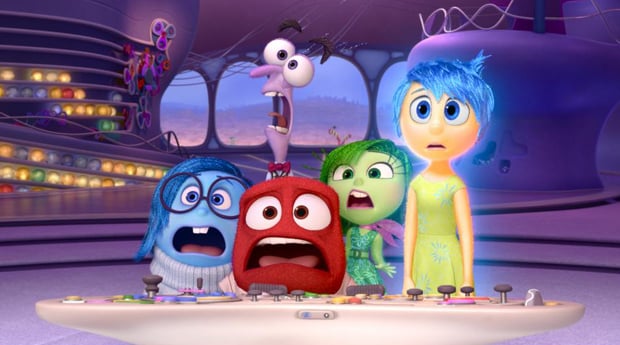 Can you imagine going inside your child’s mind to see what they’re thinking? What would it be like to see their memories and personality aspects? And would it be reflective of your own childhood development? Director Pete Doctor and producer Jonas Rivera’s INSIDE OUT sets out to explore just that! The absolutely perfect, touching film takes audiences into the mind of 12-year-old Riley (Kaitlyn Dias). Her world is controlled by five emotions: Joy (Amy Poehler), Sadness (Phyllis Smith), Anger (Lewis Black), Disgust (Mindy Kaling) and Fear (Bill Hader). However, when Riley’s carefree life begins to crumble after her family moves to a new city, her emotional enforcers are put to the test trying to keep her in balance. Let’s just say you had better bring the hankies because it’s gonna turn you into a puddle of tears.

At the film’s recent press day in Los Angeles, the cast and crew spilled the beans on the all the behind-the-scenes shenanigans. While there were a lot of highlights, particularly within the hilarious voice talent panel, we decided to boil it down to seven key fun facts.

7. Composer Michael Giacchino got the gig because of a CD playing in his car. Though Giacchino may seem like a total no-brainer to compose another Pixar film, he won this gig as Doctor’s key collaborator because of a Muppets CD. Rivera explained, “This is the first scoring day on Up back in 2009. Michael had done some of the films at Pixar, but we had never really worked with him. We get in the car at Warner Bros. after we’re done scoring that first day, he turns on his car, and he had had some CDs. Blasting out of the stereo was the theme of the Muppet Show. I’m in the back, and Pete says, ‘Oh, wow, I was listening to that same disc on the way to the airport.’ And I thought, oh, my God. What two cars on the planet earth had those two songs in, right?!”

6. Amy Poehler, Lewis Black and Mindy Kaling have creative islands in their brains. In the film, Riley’s brain is powered by core memories which each power a different aspect of her personality. Poehler said her “islands would be, Thousand Island, Fantasy Island, kitchen island, Skull Island…“Islands in the Stream” – a song that keeps getting stuck in your head.” Black stated his were, “Barbecue Island, the pork in a variety of fashions served in all sorts of delightful ways lathered with sauce. That’s a big island and the other is Tahiti.” On a more serious note, Kaling said, “Role Model Island. I think it makes me wanna live my life in a way that I think it’s inspirational and doesn’t make me feel ashamed of the people in my life. And then [I] like sleeping…Good Sleep Island. In my dreams is when I’m my best self.” 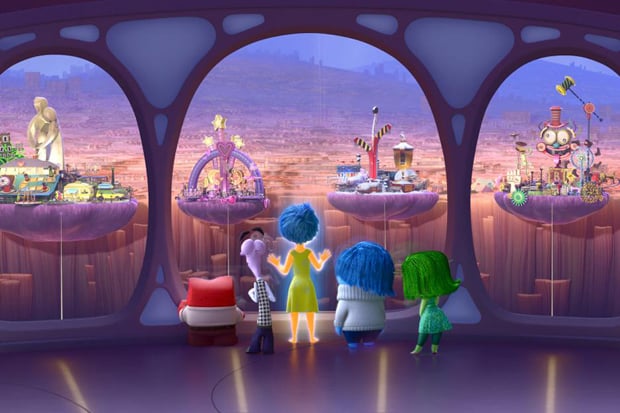 5. INSIDE OUT sticks with Pixar tradition. If you’ve watched all of the Pixar films like we have, you’ll begin to notice a theme interwoven within all the films that appears – of saying goodbye to your childhood. Doctor said, “I don’t think we talk about it verbally. We talk about it through the work. It’s something that we’re taken by, for sure.” Rivera stated, “I guess I’ve always been drawn to those stories, and it just feels like that is common at Pixar. Maybe it’s because we actually act like we’re ten-year-olds all the time. Pixar does feel a little bit like this Neverland we’ve built and maybe we’re the Lost Boys or something.” Doctor followed up, “I think the other thing that affects us is we’re trying to put our own life experiences up on the screen. I don’t think there’s been anything that has impacted me near as strongly as having been a parent. So that experience just continues to inspire and challenge and move us in ways that everybody can resonate with.”

4. The actors related to their characters. Kaling stated Disgust has, “qualities of a very impatient, judgmental adolescent girl and because I seem to be recurring in playing that role over and over again in my career – she just says the things I say on a really bad day.” Black revealed, “My family argued all the time, that’s what we did, that was the way we expressed love. That kind of anger is always kind of being a part of me.” Poehler guessed it was her “unrelenting energy and bossiness,” that landed her the role of Joy. “She just likes living in the moment and maybe [I] like to think that I do that too,” she said. Hader thought it was because he’s “a big whimp” why “Fear” resonated with him. Smith joked, “I’m just a mess and I’m a real sad sack. I sit around and mope all day and I think they saw that effervescent side of me and decided to hone in on it. No, it’s actually my insecurities that I think they – you know, those little quirks that I have – that Pete was able to glean out of me.” 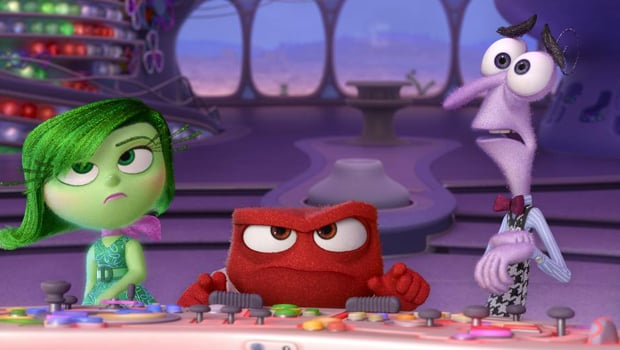 3. Anger seemed to be the other voice everyone wanted to play. While all the actors felt connected to their assigned emotional aspect, they all liked another – Anger. Poehler thought “Anger is so funny.” Hader concurred, “It’s just very therapeutic. I just felt like when I was watching Lewis’ thing I’m like ‘God it would be nice just to go into work and be like [screams] aaaahhh!” Smith wanted not just one, but two roles, “I’d like to be Angry as well as Disgusted.” Black confessed his back up was “Disgust. That’s really my second place. I spend a lot of time on the road in restaurants listening to people talk and I’m just – I’m disgusted.” Kaling brought up an interesting talking point, stating, “It’s not necessarily socially acceptable to be angry – a woman – and so that would be a fun thing to be able to do.” Poehler pointed out half-jokingly, “No one wants to be Joy, isn’t it interesting?”

2. Riley is the sole character to have a mix of male and female voices in her head. Doctor said, “It was largely based on clarity, frankly, because that scene presented itself, Ronnie del Carmen wrote and boarded that, and when we tried it with a mix of male and female and moms and dads, it just got confusing. You’re cutting from 4 locations, 18 characters, and you’re, like, “Where am I again?” We just went for the obvious of all dads have moustaches; all moms have the glasses and the hair, so you instantly know where you are. That just made it work a lot better.” Rivera added, “We sort of thought of it like if it was an SNL sketch, it would just be the prop house would come in and make it read.”

1. Lewis Black had an imaginary friend. Though the entire panel of voices was asked if they ever had imaginary friends like Riley’s “Bing Bong” (impeccably voiced by Richard Kind), it was only Black who copped to having one – although Hader joked his was “my father.” Black said, “I did – and so did two other friends of mine. I don’t really remember much except that we instead of attacking each other kind of thing and making fun of each other, it was all about the imaginary friend. That my friend’s imaginary friend was silly – so we never attacked each other.” 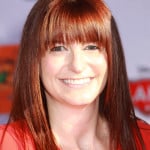 Load More...
She Saved, LLC is a participant in the Amazon Services LLC Associates Program, an affiliate advertising program designed to provide a means for sites to earn advertising fees by advertising and linking to Amazon.com and MyHabit.com
56shares