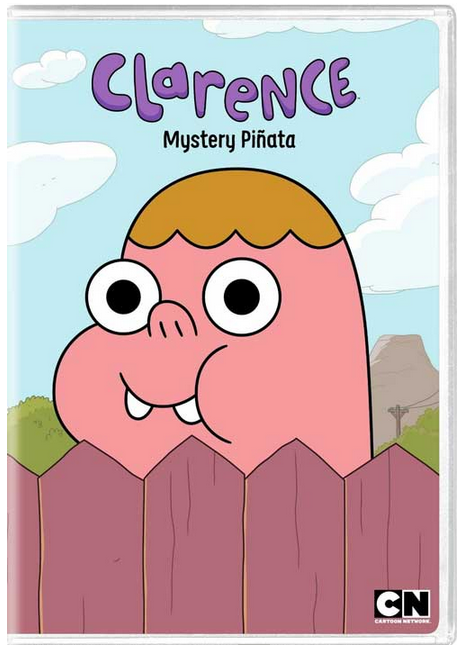 Clarence: Mystery Piñata
In Clarence, the latest series created through its prolific shorts development program, Cartoon Network Studios has developed the story of an optimistic, spirited, lovable boy who sees the best in all things and wants to try everything. Because everything is amazing! In the all-new Clarence: Mystery Piñata DVD celebrate the best of childhood: epic dirt fights, awkward crushes, trampoline combat, sleepover pranks and secret tree forts all through the eyes of Clarence. His novel perspective transforms nearly any situation, however mundane, into the best day ever. No matter what happens, nothing brings Clarence down.

Where to purchase? You can purchase Clarence: Mystery Piñata on Amazon for $9.79.

The DVD release of Clarence: Mystery Piñata marks the first home entertainment release for the animated series and features a collection of 12 popular episodes, including:

Produced by Cartoon Network Studios, Clarence has emerged as a top-rated comedy series for the network during its first season run. During each month new episodes aired on the network, an average of 6 million kids 6-14 and nearly 4 million boys 6-14 tuned in to watch the series – along with Steven Universe – according to Nielsen NPower data, making it the #1 show among kids and boys 6-11, kids and boys 6-14, and boys 9-14 in its timeslot across cable and broadcast networks.

Episodes of Clarence can regularly been seen on Cartoon Network and are featured on cartoonnetwork.com.

Our thoughts? I agreed to review with DVD out of pure curiosity. I had heard that Clarence was funny (with a touch of sarcasm) and I really wanted to see for myself. I previewed this dvd before sharing with my kids and I do have to say, Clarence is a funny character. He is ALWAYS happy, and he does have a very funny personality, although very quirky and a bit odd at times, but this series is a very simple and just kind of cute silly humor that my kids LOVE. I think that this is a fun series because Clarence is just a happy kid who seems to see the best in everything. It is a bit strange (warning!) but it’s a silly strange, and honestly, some of his humor is really good stuff.